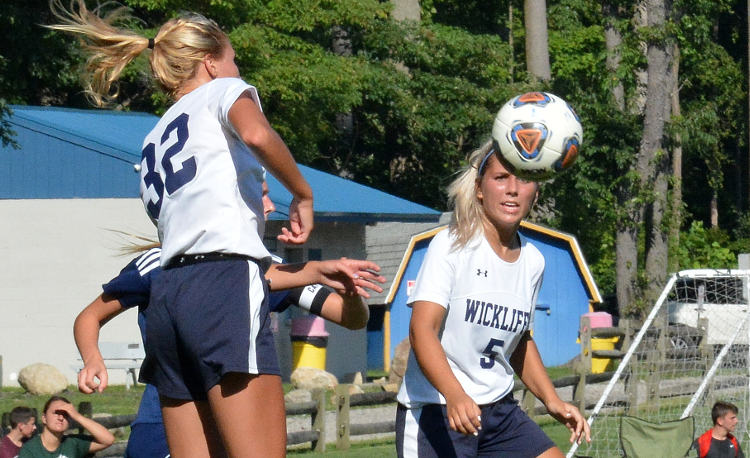 The Blue Devils improved to 2-2 overall and 2-0 in league play.

“This was a total team win today,” Wickliffe coach Steve Gribovicz said. “We struggled in the first half with the intensity that Trinity brought into the field. After halftime, I thought we kicked it into a new gear. In the final 20 minutes, Ana, Caitlyn (Henderson), and Jaina (Buttari) re-entered the game and fueled a late charge for us that the rest of the team caught and helped propel us to victory.”

Neither team found the net in the first half but Wickliffe bunched its second-half goals together in the 67th minute.

Buttari crossed a ball into the box and Stjepanovic finished it off for the first Wickliffe goal. Gabriel scored the second a minute later on an accurate shot from distance.

Kaylee Lauriel recorded five saves for the Blue Devils, who return to action on Sept. 5 when they host league rival Independence.

“We had some younger players show assertive play today and our seniors took more leadership of the team,” Gribovicz said. “I look forward to seeing this attitude take over the team and continuing throughout the season.”

“Summer’s goal was really spectacular, given the way the match played out,” Trinity coach Calvin Jefferson said. “All of the girls played really strong and nearly earned the result.”

Despite the loss, Jefferson was pleased with what he saw out of the Trojans.

“Wickliffe is always fun to play, and they are now a top squad, so it was very encouraging to see our team step up and really play some good soccer,” he said. “We did what we wanted to do against a very quality opponent. Our team, a mix of experienced and inexperienced players, brought intensity and discipline, which allowed us to have some things go the way we wanted for much of the match.”