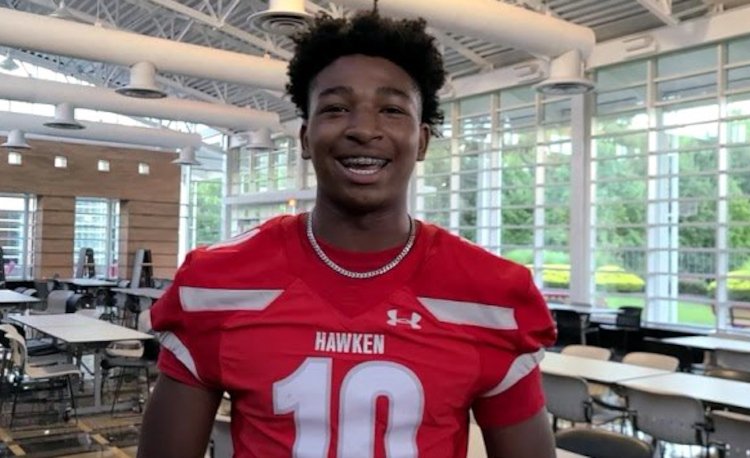 CUYAHOGA HEIGHTS–A game that saw a back-and-forth first half with both offenses having success broke open in a big way in the second half with Hawken downing host Trinity at Cuyahoga Heights on Saturday, 56-28.

The Hawks shrugged off a halftime deficit and reeled off 38 unanswered points to snatch a key early-season Chagrin Valley Conference road win. It was reportedly Hawken’s first varsity football victory over the Trojans since 1993.

“For us, it was about not making first game mistakes,” said Hawken head coach Brian Stephenson. “We came out and threw two interceptions because they were playing a loose zone coverage and normally they show man, and it was just a matter of getting comfortable and relying on our run game. We told these kids all summer, ‘you throw to score, you win games by running the football,’ and we were able to run the ball tonight and that helped us tremendously.”

Trailing 21-14 halfway through the second quarter, a 28-yard TD strike from senior quarterback Terrence Robinson II – one of three scores the mobile QB would have a hand in on the night – to senior receiver Jordan Harrison brought the Hawks within one point after Trinity blocked the extra point. However, the big plays continued as Trinity sophomore running back Caleb Moss ripped off an 82-yard jaunt around the left end for his second TD of the game, giving the Trojans an eight-point lead heading into the locker room.

Hawken received the football to open the second half and came out firing in its no-huddle NASCAR package. Yet, it wasn’t a quick-strike passing attack that would boost the Hawks early in the half, however, as this quarter would feature four unanswered scores in the half’s first 12 minutes from electric junior running back Dom Johnson, one on a 29-yard fumble recovery and the other three on the ground.

What was only moments earlier a one-score lead for Trinity quickly devolved into a 42-28 dearth, and the Trojans never fully recovered. Two big quarterback sacks on Trinity’s Ian Anderson by Hawken senior captain A.J. Sands and a timely interception by senior defensive back Ben Elenin with less than 11 minutes left in the contest sealed the opening night road victory for Hawken.

On the other sideline, Trinity coach Jeff McSweeney lamented a second half that somehow quickly got away from his team. For what it’s worth, the Trojans were plagued by soft tissue injuries throughout the early going in the third quarter, but McSweeney refused to make injury excuses for the poor opening night results.

“We’re young in many areas and I think tonight our young team took a couple of steps backward,” McSweeney said. “It’s unfortunate but we’re going to have to grow from this. I don’t know if we thought eight points was enough (to win) or what, but credit Hawken. They came out and did what they needed to do. They just executed and we didn’t.”

When the Hawks get back to Geauga County and put the game tape on from Saturday night, the diminutive-but-oh-so-electric Johnson and his Hawken teammates should have a lot of fun reviewing the game tape.

“Dom is fantastic, he’s worked his butt off (this offseason),” Stephenson said of the junior playmaker. “He missed last year with an injury – he fractured his pinkie (finger) right before our first game so for him to come out and have this type of first game, it was spectacular. I’m so happy for him right now.”

Hawken hosts Chippewa in its home opener on Aug. 27 while Trinity heads to Chagrin Falls for another key CVC battle against the Tigers.

Matthew Grassi
Grassi, a 2010 Cleveland State University graduate, is a former Northern Michigan sports editor that has spent the last decade covering agriculture and agriculture technology for various B2B publishing companies around the Cleveland area. A Painesville native, he played varsity football and ran track at Riverside High School and played a year of DIII college football at Heidelberg College in Tiffin, Ohio. He’s an avid Cleveland Browns fan and a devoted dynasty fantasy football and sports gambling enthusiast, and he still plays basketball with a group of high school friends every morning on the far eastside.