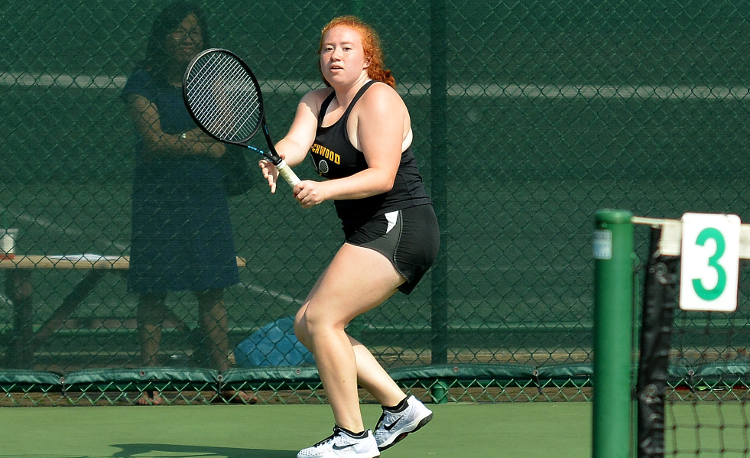 The Division II sectional tournament opened play on Wednesday and nine individuals and three doubles teams from the Chagrin Valley Conference remain in play after the first day of action.

Hawken’s doubles team of Sammi Fremont and Yellin Kong opened the tournament with a 6-0, 6-0 win over Heidi Hazelrig and Anna Hogrefe of Andrews-Osborne then topped Gilmour’s team of Isabella Martin and Avery Walton, 6-1, 6-1. They advanced to the semifinals with a 6-4, 3-6, 6-4 win over Orange’s Rachel Pomeranets and Sarah Harlan. They’ll play St. John’s Emily Cevera and Julianne Sheldon in Thursday’s semifinals.

Hawken’s Tess Mamy and Kailey Rantanen advanced to the quarterfinals where they’ll play Beachwood’s doubles team, which advanced with a 4-6, 6-3, 6-4 win over Orange and a 6-2, 6-0 decision over Edgewood. The winner of the quarterfinals match will play Notre Dame-Cathedral Latin in the semifinals.

In singles play, all three of the CVC’s top four seeds advanced.

West Geauga’s Rylie Hanford, the No. 1 seed, opened the tournament with a 6-0, 6-0 win over Perry’s Meredith Robinson, then she defeated Orange’s Rachel Glukh, 6-0, 6-0. She awaits the winner of the third-round matchup between Beachwood’s Sabrina Machtay and Andrews-Osborne’s Jansen Sminchak. Machtay moved into the third round with a 6-2, 6-0 win over Edgewood’s Sara Howard.

Orange’s Alexis Nyborg, the No. 4 seed, won her first two matches and will play Hawken’s Eliana Yang in the quarterfinals. Nyborg opened the tournament with a 6-1, 6-0 win over Beachwood’s Zilin Zang and then she defeated Perry’s Anna Fletcher, 6-0, 6-0. Yang advanced to the quarterfinals with a 6-1, 6-1 win over Chagrin Falls’ Morgan Dishler in the first round, a 6-2, 6-1 win over Geneva’s Gabbi Selman in the second and a 6-1, 6-0 win over Conneaut’s Katie Banish in the third round.

Orange’s Blessing Nwaozuzu, the No. 2 seed, opened the tournament with a 6-0, 6-0 win in the second round and will play Lake Catholic’s Hayley Middleton in the third round.

Xiao won her first two bouts and will play Breeden in the third round. Xiao beat Harvey’s Judy Estrada, 6-0, 6-0, in the first round and topped Jefferson’s Meg Jacobs, 3-6, 6-3, 6-2, in the second round. Breeden advanced with a 6-0, 6-1 win over Lake Catholic’s Eva Shoen in the second round.

The winner of the Xiao-Breeden match will play third-seeded Carley Cohen of Gilmour in the quarterfinals.