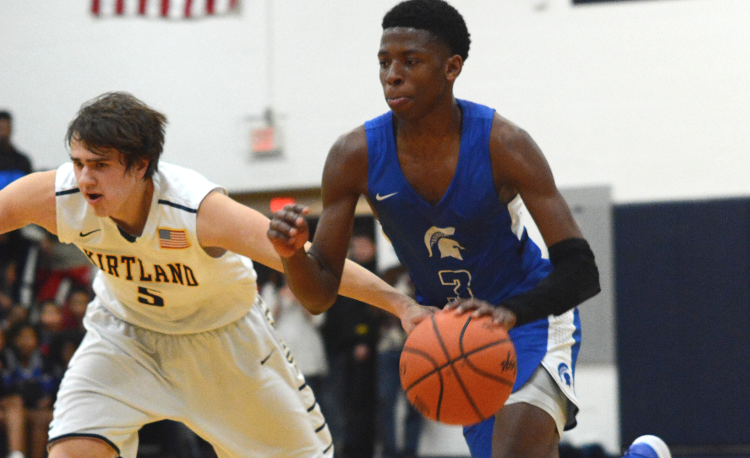 KIRTLAND–Gbolahan Adio scored a game-high 17 points and Curtis Houston added 16 to lead Richmond Heights to a 63-52 win at Kirtland in front of a standing room only crowd on Friday.

The Spartans may have flinched early on at the added pressure of playing in front of a raucous crowd as the score was deadlocked at halftime, 26-26, but Richmond Heights was up to the challenge and pulled away in the second half to seal their second straight Chagrin Valley Conference Valley Division championship.

With games at Lorain, at Benedictine and at Toledo Rogers under their belts, the Spartans were prepared for the intensity and atmosphere at Kirtland.

“That’s why when I set the schedule up we played the teams we played,” Rogers said. “They played against some of the best teams in the state for their opening nights and for just a regular night. They were kind of used to dealing with crowds. I was real proud that they kept their composure. That’s one of the reasons I had set that schedule up, to have one of the schedules I believe was probably one of the top most difficult ones in Northeast Ohio.”

Unlike in the first meeting between Richmond Heights and Kirtland on Jan. 26—a 74-53 Spartans win—the Hornets weren’t intimidated or outplayed by the defending league champs.

“I think our kids just got used to the speed of the game in the beginning,” Kirtland coach Shawn McGregor said. “In the first game, we got down in the first quarter and then we kind of played them even in the next three quarters and it got extended a little bit in the fourth. Today, I think we matched the pace of the game from the beginning. We matched the athleticism and the physicality. We were ready to go.”

The Hornets led 17-14 after the first quarter but settled for a tie at halftime.

Richmond Heights used a 7-3 run to take a 33-27 lead early in the third quarter but the Hornets responded with a 14-2 run to build a 41-35 lead midway through the period.

That’s when the Spartans stepped up and took control of the game.

They closed the third on a 9-0 run then maintained their composure and the lead for the rest of the contest.

“What I was proud of was the discipline and the focus down the stretch,” Rogers said.

Richmond Heights converted on 11-of-15 free throws in the second half while the Hornets were 8-of-16 in the final 16 minutes and just 6-of-14 in the fourth quarter.

“I think we just got gassed at the end and missed a couple of free throws and missed a couple of open 3s,” McGregor said. “You have to make shots like that in order to win those games but I’m very proud of our kids. They competed and that’s all you can really ask for. As long as they play hard I’m proud of them and I think they did that tonight.”