The rich get richer at Perry 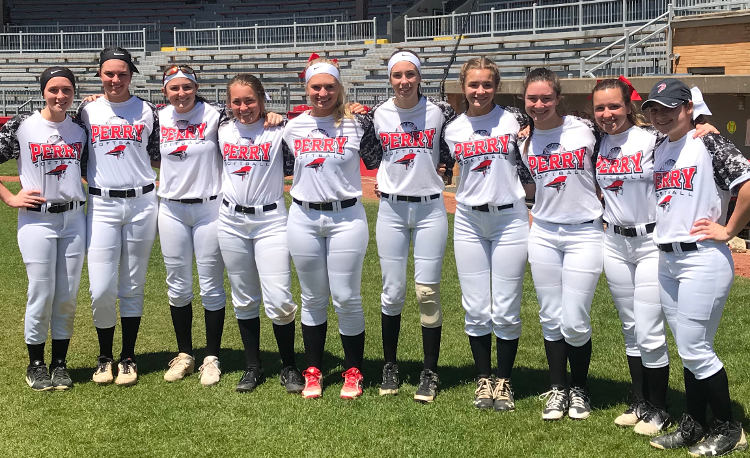 The Pirates filled that hole in the lineup with two dynamic freshmen and a junior ready to contribute.

With a loaded roster and regional experience under their belts, the Pirates are eyeing an even deeper postseason run in 2019.

“The biggest difference (between this year and last) is that we were able to get to regionals and get that needed experience,” Perry coach Joe Medlen said. “Until you get there, I have done this a long time, but there is nothing like it. When you play for and represent your school district and county, it’s very special.”

Leading the way for the Pirates is Mount Union commitment Emalee Sines, who returns at third base after earning the CVC Player of the Year award last spring.

“Emalee is looking for a huge season this year,” Medlen said. “Emalee has some goals and she is well on her way to achieving them.”

Moon, a St. Bonaventure commitment, was as dominant as any pitcher in Ohio last year.

“She carried us into the regional semifinal game,” Medlen said. “Olivia has the potential to put up some incredible numbers this year. Olivia has worked hard over the winter attending lessons at Leflew Fastpitch in North Ridgeville. Olivia is not only a standout pitcher but she is also a very strong hitter. We cannot wait to see Olivia crushing her goals this season.”

Senior Angela Vicini, a Gannon University commitment, returns at first base. Classmates Ava Strahan will line up in center and Ally Hartman will play left.

“Our senior class is amazing,” Medlen said. “They’re some of the best players in the state. This group has defined the culture of Perry softball.”

Hartman and Strahan provide the Pirates with versatility and the composure they’ll need to get through tough times.

“Ally is the comedian of the team and keeps us loose. Al also is a very solid outfielder and has worked extremely hard at her hitting, mostly doing double sessions during the winter with hitting so we expect a breakout year at the plate,” Medlen said. “Ava is a quiet leader on this team. Ava will share time between outfield and shortstop and will have a tremendous year.”

“Elle has worked extremely hard in the weight room this season and we look for her to have a breakout sophomore year,” Medlen said. “As a freshman, she was one of our top hitters and again will do the same. Elle has had some great experience in the postseason with softball and basketball.”

Senior Elena Ciolli is healthy this spring and ready to lock down second base for the Pirates.

“Elena brings the work ethic that every coach looks for,” Medlen said. “I know that not many players or student-athletes work as hard as Elena. She has an incredible can do attitude. We’re looking for big things from Elena as she was injured most of the season last year as she tore her hamstring down at Myrtle Beach and came back just before playoffs but was not 100-percent. Elena could play at the Division I level with her work ethic on and off the field.”

Junior Katie Pietrzak has big shoes to fill in stepping in for the graduated Taylor Hradek at shortstop.

“The expectations are high but Katie is determined and ready to own the moment,” Medlen said. “Katie will also spend time in the outfield where she will show her speed. Katie is one of the best base runners I have ever coached.”

Sophomore Sydney Moon rounds out the projected starting lineup as she is slotted to patrol right field. She’ll also see time in the circle.

“Syd also had an incredible freshman campaign and we know she will have even a bigger year this year,” Medlen said. “Syd is one of our strongest hitters. She absolutely hurts the ball.”

Freshman Faith Hartman is a high-caliber pitcher who will team up with Olivia Moon to provide the Pirates with a dominating one-two punch.

“Faith has worked very hard with her pitching and is going to be a cornerstone of our program for four years,” Medlen said. “Everyone is waiting for Olivia to graduate but Liv will pass the baton off to Faith and she will run with it.”

“Gi is the last Vicini of the family we will be blessed to coach for four years,” Medlen said. “We coached her brother Jake in baseball, Hannah, who attends and plays for John Carroll, Angela, who is currently on the team and is continuing to play at Gannon University next fall. Such a great group of kids and a very supportive family.”

Junior Crylynn Reynolds will serve in a utility role for Perry this spring.

“Crylynn has really worked extremely hard since last season and you can tell,” Medlen said. “We are excited to watch Crylynn continuing to grow.”

Perry has the pieces and parts to pick up where it left off last season.

Obviously, the Pirates have to remain healthy but they also have to take advantage of their offseason work.

“I believe our strength fell off last year so this year we have placed an importance on the weight room and we will continue into the season,” Medlen said. “We have spent more time in the weight room this year than my previous four years. We are blessed to have one of the best trainers in Mike Crissinger. I clearly can see the difference in how we are throwing and hitting the ball. Our exit velocities are way up.”