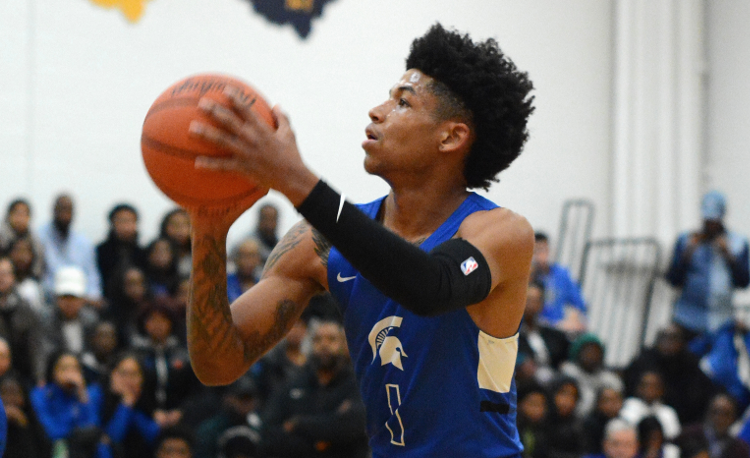 NORTON, Ohio—Chalk this one up as a valuable life lesson learned.

About a year ago, the Richmond Heights boys’ basketball team was embarrassed on its home floor, losing a Division IV sectional final to Warren JFK, 84-75. That loss has fueled the Spartans for the past 12 months.

Monday the top-seeded Spartans showed how they have grown from that experience, using superior outside shooting and athleticism to break open a close game in the third quarter to defeat No. 4 seed Rittman, 70-54, in a district semifinal at Norton High School.

Richmond Heights, 18-6 and winners of the Valley Division of the Chagrin Valley Conference, move on to the district final Friday at 7 p.m. at Norton. The Spartans will face the winner of Tuesday’s semifinal between Open Door Christian and Columbia.

“We saw and we felt how it is to lose so early when we know we shouldn’t have lost that early,” senior guard Curtis Houston said. “So, we really want to fix that. Focus is real big for us, seeing how that’s what killed us last year. Coach has really been working on that.”

“It’s just focus and discipline,” Rogers said. “That’s all I wrote on the board to get ready for this game. Focus, discipline and sticking to a game plan. That’s really what all this was about.”

It was sticking to the game plan that enabled the Spartans to pull away in the third quarter.

Richmond Heights only trailed once the entire game, 17-16, just 1 minute into the second quarter. The Spartans then scored the next eight points and never trailed again.

But Rittman, which won the Norton district title last year before falling to eventual state runner-up Cornerstone Christian in the regional semifinal, proved to be a pesky opponent.

The Indians scored the first basket of the third quarter to pull to within two, 30-28.

After Richmond Heights junior Anthony Maxie split two free throws, the Spartans hit a spurt that put the game away, connecting on five consecutive 3-pointers to push the margin to 46-33. Twice Rittman got back to within seven, but eventually, Richmond Heights pulled away for a relatively easy victory.

“We shoot every day,” Rogers said. “That’s what I told them. We’ve got the confidence; we just needed a little more lift on our shots. We raised the energy up on defense a little bit and we put more legs into our shots.”

Within a span of just 43 seconds, Jamarr Talbert, Houston, and Gbolahan Adio each hit 3-pointers. After Rittman scored consecutive baskets, Talbert and Adio each added another shot from beyond the arc. Later in the quarter, Houston hit another 3-pointer, as the Spartans connected on six bombs in the period and eight in the game.

“We all can shoot,” Houston said. “We like to get out and run, but if we have an open shot, we’re going to take it.”

Maxie led the Spartans with 17 points, including five dunks, and four blocked shots. Houston added 16 points, while Adio had 15 and Talbert had nine. But it’s Houston who makes the Spartans go.

“He’s grown and matured so much over the last year,” Rogers said. “He’s taken that leadership role seriously. His teammates respect him. With his energy and his effort, that makes him respected a little bit more.”