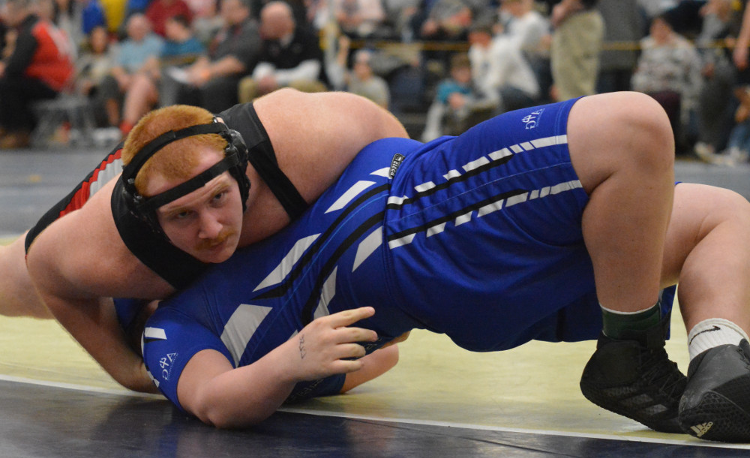 The final leg of the long journey to the state wrestling tournament concluded on Saturday with wrestlers from the Chagrin Valley Conference winning three individual district titles and six others punching their tickets to Columbus.

A little history was made as well.

Hawken ended a 20-year district championship bout when junior Jackson Reineke won the 120-pound title at the Division III Garfield Heights district ensuring his second straight trip to state. A short time later, junior 285-pounder William Lindsey set another mark when he gave the Hawks their second district champion in a single season for the first time in school history.

Freshman Patrick Reineke finished third at 106 to become the third Hawk to earn a trip to Columbus and the first time the Hawks have sent a pair of brothers to the state tournament together.

“That’s the best part of it all,” Jackson Reineke said. “Our entire lives, we have wanted to go down together and we finally get the chance now that we are both on the same high school wrestling team. He plays a huge role in my life on and off the mat. Achieving this goal means everything to me.”

Jackson Reineke was dominant in winning his bracket.

He pinned all three of his opponents to reach the finals then scored a 10-1 major decision over Pymatuning Valley’s Jake Edelman, a two-time state qualifier.

“It’s honestly astounding,” Reineke said of his dominance. “My training this season has been extremely intense with the sole purpose of being able to perform in a high-caliber match like the finals. My goal was to make it down to states but it has evolved into something bigger this season. This finals match was a testament that hard work truly pays off and it meant the world to me.”

With a top-seed heading into the 2019 state tournament, Reineke hopes to fare better next weekend.

“The seeding helps a lot but it’s not going to change my mindset,” he said. “I will continue to take each match one at a time. The only thing that this seeding provides is a better position to achieve my state goals.”

Lindsey also pinned his way to the finals then won the district title when three-time state qualifier Joe Warren of Smithville suffered a knee injury in the first period of the championship bout.

“I am very excited to have won the district title,” Lindsey said. “My main focus was just staying aggressive throughout the entirety of every match and movement in neutral.”

Lindsey improved to 46-1 on the year and he is undefeated against Ohio wrestlers. He hopes to carry that streak into championship weekend in Columbus.

“I haven’t been down to Columbus yet as a competitor so I am very excited to go down and do my best,” he said. “My finals match was a returning placer and I was doing pretty good against him before he got hurt so I am really looking forward to this weekend.”

He needed a last-second takedown to beat Berkshire’s James Klingman in the consolation semifinals, 3-2. It was the second time this season Reineke used a late takedown to edge Klingman, who finished in fifth place and will be a state alternate next weekend.

Frye, who finished second at 106 and will wrestle at state, was one of two Cuyahoga Heights wrestlers to place among the top six. Luke Hopkins finished fifth at 132 and will be a state alternate.

He pinned his first two opponents then won 7-0 in the semifinals. He fell to two-time state qualifier Chris Langguth of Rootstown in the finals, 7-5.

Independence senior Michael Kucera will return to state for the second straight season after finishing third at 126 pounds.

“It was a big relief placing third this weekend and an improvement from last year where I took fourth at districts,” Kucera said. “I’m also excited to get one last shot to place at state my senior year.”

Kucera opened the tournament with a 4-3 win then fell to eventual runner-up Kyle Keenan of South Range in the quarterfinals, 3-0.

He reeled off three straight wins to earn his state berth and closed out the tournament with a fourth straight victory, an 8-4 decision over Kirtland’s Konnor Duncan, a returning state qualifier.

“My approach getting through all the consolation matches was to just wrestle my match and to hand fight aggressively,” Kucera said. “As long as I came out to the mat with good movement and hard hand fighting, I believed I would make it through. I’m going to approach the state meet as aggressive as possible and hopefully secure a spot on the podium to finish off my senior year.”

Duncan recorded a pin and major decision to reach the semifinals, where he fell to Keenan, 4-3. He beat Rootstown’s Mason Kline in the consolation semifinals, 6-5, to set up the showdown with Kucera in the third-place bout.

“I’m glad to be able to end my high school career on a high note with my return to the state tournament,” Duncan said. “Fourth isn’t as good as I hoped but it is still an accomplishment.”

After the loss to Keenan, Duncan knew what was at stake in the consolation bracket and he wasn’t about to let his season end in the district tournament.

“My mentality was for those matches was to just get it done,” he said. “I knew that I wanted to end up at the state tournament and I was as going to work as hard as I needed to in order to get there.”

Duncan heads to Columbus more confident than he was last season in his first trip to the state championships.

“Approaching states this year is going to be much different than last year because I know what to expect from myself and the other wrestlers,” he said. “I’m going to focus on being mentally ready and keeping my conditioning up for this week’s matches.”

Just three CVC wrestlers earned a spot on the podium at the Division II district tournament at Alliance High School.

Perry’s Kyle Rowan won the 106-pound title after finishing second last season. He finished second at state last season and is a favorite to win the state title this winter.

Geneva’s Charles Taylor finished fourth at 220 pounds and will join Rowan at state.