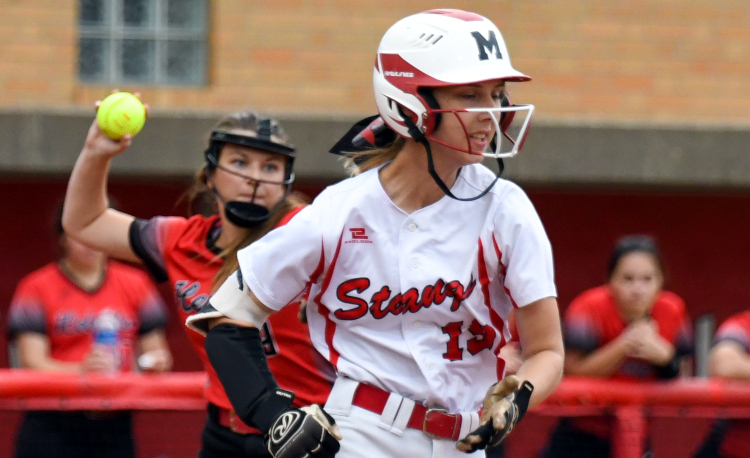 AKRON—Cuyahoga Heights will take another swing at a state title after downing Vienna Mathews in a regional championship game at Firestone Stadium on Sunday, 4-2.

Clutch hits, a stingy defense, and consistent pitching from senior Julia Harris helped Heights to score the come from behind victory.

“It’s crazy,” said Heights coach Kyle Manfredonia. “I’m so happy for them because they’ve worked so hard. We set goals at the beginning of the season. One was to win the conference, and we were able to share it with Independence, and the other was to win a state championship. There are four teams left and we’re and it’s all because of them and what they do.”

Both teams left a runner in scoring position in the first inning.

Mathews took a 1-0 lead in the second on a single, a sacrifice bunt, and a two-out single, but Heights didn’t flinch.

“They don’t get rattled and they just play their game,” Manfredonia said. “We fell behind in just about every game in the playoffs. I know Julia isn’t going to let it happen again and our hitters hit. I didn’t lose any confidence because I knew what they were going to do. I knew they were going to pull it out.”

Junior Zakiya Baker singled to start the Heights third and moved to second when sophomore Alize Reyes reached on an error. Sophomore Tessa Studniarz then hit a two-run double to right-center to give Heights a 2-1 lead.

Studniarz drove the ball to the fence after a brief struggle at the plate.

“Tess has not been hitting the ball very well and she hasn’t been on base in a long time, so for her to get there was awesome,” Manfredonia said. “It was poetic.”

Cuyahoga Heights added a pair of insurance runs with two outs in the sixth.

Sophomore Kaylee Vallee reached on an error and a two-base error and senior Madison Vance followed with an RBI single to push the Heights lead to 3-1. Sophomore Tess Conroy’s RBI triple pushed it to 4-1.

“Julia isn’t going to give up that many runs, so as soon as we got those extra ones, I knew it was over,” Manfredonia said.

The Mustangs did score on a one-out triple with a one-base error but Harris retired the next two batters to end the game.

As good as Harris was, her defense rose to the challenge as well.

Right fielder Sierra Wise cut off balls in the gap and Reyes chased down a foul ball from her position at second base in the seventh inning. Senior Sydney Dyer was masterful at third base handling all the pressure the Mustangs hitter placed on her with their exceptional bunting skills.

“Defense wins championships,” Manfredonia said. “We knew they were going to play small ball. I’ve known (Mathews coach) Jim (Nicula) for a long time but I told Sydney as long as we handle it, there’s nothing they can do and she did. It was a great job by her.”

Reyes, Studniarz, Vance, Conroy, and Baker each had a hit for Heights.

Cuyahoga Heights will play Newark Catholic in a state semifinal at Firestone Stadium on Thursday at 5:30 p.m.

Heights is making its first appearance in the Final Four since 2015. That year, Heights fell to Triad, 2-1.

In its only other appearance in the state tournament, Cuyahoga Heights beat Wayne Trace, 6-1, in the 2014 state semifinals and went on to win the Division IV state championship with a 2-1 win over Minster.