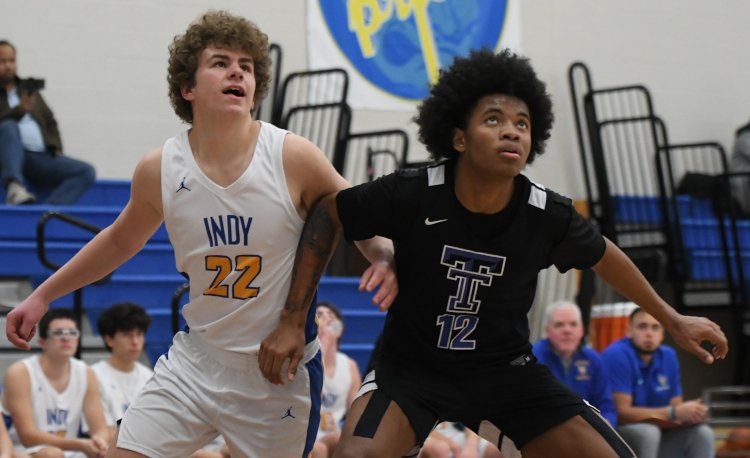 INDEPENDENCE—Trinity rallied from behind in the second half to earn a hard-fought win at Independence on Tuesday, 49-43.

The Trojans trailed by as many as seven before making several key plays down the stretch to slip past the Blue Devils.

“There’s no such thing as a bad win, but disappointed I think is the word I would use,” said Trinity coach Dan Urban. “We’ve been in a slump lately. We had a bad game against East Tech, and it carried over into tonight. We just have to do a better job taking care of the ball. We struggled against the zone even though we knew it was coming. Credit to them, they’re young, but Independence has never been bad. We watched film and said they don’t look like an 0-8 team, and now they have one win, but they don’t play like a one-win team. They play hard, they’re well-coached—he does a heck of a job with them—so I’m just grateful to get out of here with a win.”

Independence, fresh off its first win of the season on Saturday, took an early 12-9 lead in the first quarter.

The Blue Devils maintained that lead until Trinity’s Shaun Wood hit a jumper at the end of the second quarter to send both teams into the break tied at 25-25.

Sam Crooks scored eight straight points to kick start a 10-0 run for Independence early in the fourth quarter as the Blue Devils pushed their lead to 43-37.

A technical foul on the Blue Devils midway through the fourth not only stopped Independence’s run, but it also shifted the momentum into Trinity’s favor.

“I’ve never really seen a team get a technical and then lose the energy like we did,” said Independence coach Marc Holliday. “I felt like that really zapped us. Usually, when you pick up a technical guys get fired up, so that’s another learning experience for us.”

Trinity did get fired up by the technical foul and the Trojans scored the final 12 points of the game.

Quincy Haynes led the Trojans with 10 points. Dom Locklear and Jordan Thompson-Seay both contributed with nine, Carlen Morris scored six, Wood and Eric Snow both finished with five, Aidan Duncan and Keenan Hughes both pitched in with two, and Christian Price scored one point in the win.

It was that depth and team-scoring approach that paid dividends for Trinity.

“We have like four guys that average seven, three guys that average like nine, and we’ve had 14 guys play,” Urban said. “We’re trying to keep the scoring level though; we don’t really want to have just one guy scoring 16 or 17. We want it to be spread out amongst everybody and we want to get everybody involved.”

“In the first half, we executed our game plan,” Holliday said. “It was all about tempo tonight, and I thought we did a really good job for the most part. We executed an extended zone, which is something new for us, but Trinity did a good job and put us in some bad spots. We once again put ourselves in a position to win, and now, as a young ball club, we have to start to learn from these because there are only so many learning experiences before you have to start putting it together. I’m pleased with the effort, and I’m never going to knock my guys for effort, but we have to start to learn from this.”

With the win, Trinity improved to 7-3 overall and 2-2 in the Chagrin Valley Conference Metro Division. Independence dropped to 1-9, 0-4.