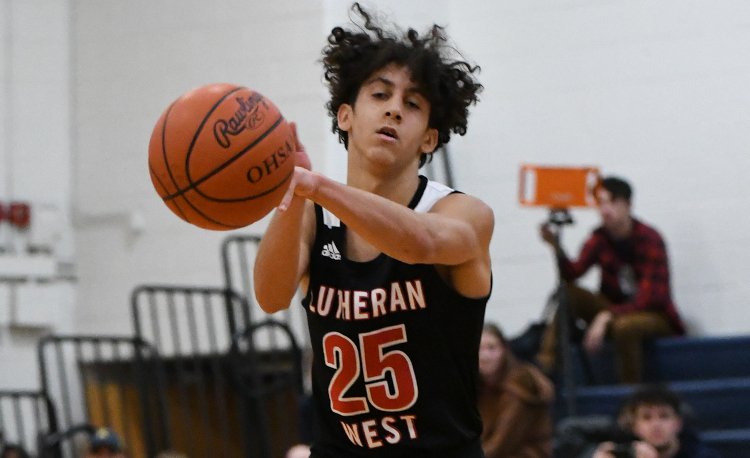 Lutheran West picked up a big victory on Sunday when the Longhorns downed Division I powerhouse Shaker Heights during the Play-By-Play Classic at John Carroll University on Sunday, 66-60.

The Longhorns, who are ranked by MaxPreps as the 15th-best high school team in Ohio, regardless of division, and the sixth-ranked team in Division II, pulled away from the Raiders in the second quarter and then weathered a Shaker run in the fourth quarter to seal their victory.

“Every win that we have continues to build our confidence to make our guys believe that we can play against anybody and we can compete against anybody and play the right way,” said Lutheran West coach Jordan Duke. “The wins against the bigger schools who have had storied success and been successful for years and decades, being able to win those games are confidence boosters for the whole program, and I think being able to pull those out will help us be comfortable playing in big games as we move forward.”

After a back-and-forth first quarter which left Lutheran West in the lead, 17-6, the Longhorns outscored the Raiders in the second quarter, 19-9, to take a 36-25 lead into the break.

Jayson Levis led the Longhorns with a game-high 22 points. He scored 10 in the first quarter and eight more in the second with four first-half 3-pointers.

Levis also helped to slow down the Shaker Heights offense.

“A lot of people see his scoring abilities, but he also defends at a high level,” Duke said of Levis. “He leads us at a high level and he does a lot of different things for us to be successful. That type of player is the reason why we’re able to continue to be successful. His leadership helps us play at 100 percent on both ends of the floor and helps us pull games out night in and night out.”

Lutheran West maintained its double-digit lead entering the fourth quarter, but the Raiders climbed back into the game to make it interesting down the stretch.

Joshua Meyer scored four of his nine points in the fourth quarter and the Longhorns converted on 7-of-11 free throw tries in the final eight minutes.

Matthew Meyer also scored nine points in the win and Dylan Bartchak contributed with seven, Derek Fairley and Junior Kombomba both scored six, Shamari Richard, Lewis Smith, and Clay Noble, each pitched in with two points, and Mordecai Godson rounded out the scoring with one.

“Our big man, Josh Meyer, played extremely well today,” Duke said. “I thought he gave us great minutes from inside and defending and finishing at the rim. Dylan Bartchak came in and hit some big shots for us to help us get out to a decent lead. Those guys are starting to click even more and it’s a good feeling.”

With the win, the Longhorns improved to 10-1 overall and now have won three straight.

The early success is welcome, but the Longhorns have bigger goals on the horizon and Duke is confident his team is progressing the way it needs to in order to achieve those goals.

Richmond Heights improved to 11-0 with a 57-54 win over Lutheran East in the Play-By-Play Classic.

The defending Division IV state champions used an 18-6 third-quarter run to pull away from the Falcons, then had to scratch out the win in the fourth after Lutheran East used a 13-5 run to cut the Richmond Heights lead to just four points.

Dorian Jones highlighted the win with a pair of fast break dunks down the stretch.

Defensively, the Spartans forced 17 turnovers in the win.

“It opens up the offense, we have to be able to stop people,” Richmond Heights coach Quentin Rogers told The News-Herald. “A majority of our practice is defense, so we expect to come out and defend on a high level. We made some adjustments and were able to address some of their challenges. They did a good job defending our shooters and we weren’t getting the shots to fall early but there are going to be these types of games where you have to win on defense.”

Hosea Steele led the Spartans with 22 points and he also pulled down 13 rebounds. Steele hit a pair of three throws with seven seconds left to push the Richmond Heights lead to six points.

Lutheran East hit a 3-pointer at the buzzer to close out the scoring.