With the win, Rowan improved to 41-0 on the year and became Perry’s third state champion and just the second to finish a season undefeated.

Rowan opened the tournament with a 20-5 technical fall over Monroe’s Caleb Thomas and then he pinned Bellevue’s Gabe Alda in 1:43. Rowan edged Lake Catholic’s Brendan McCrone in the semifinals, 6-2, before the rematch of last week’s district championship match with Crosby in the final.

Rowan was one of five Chagrin Valley Conference wrestlers to earn a spot on the podium over the weekend. 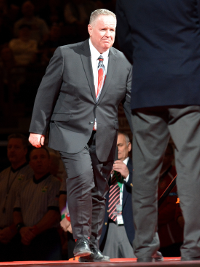 Cuyahoga Heights superintendent Tom Evans was honored prior to the start of Saturday night’s championship round as a new member of the Ohio Wrestling Officials Hall of Fame.

Evans spent 16 years as a wrestling coach at Berea and Elyria Catholic high schools and he also coached football and track. For the past 25 years, he has managed sectional, district tournaments throughout the Cleveland area as well as several invitational tournaments.