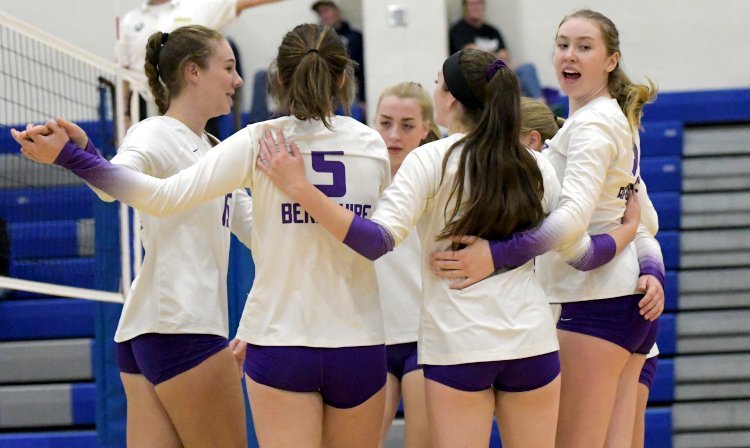 Berkshire has some holes to fill in its back row but the Badgers return most of its rotation and have added young talent to its roster leaving the squad poised for a strong run this fall.

With five returning starters, 18th-year head coach Joni Prots is eager to see what the Badgers can do this season.

“I am really excited about the mix of talent we have on this year’s team,” Prots said. “I look forward to watching them develop as a team. We hope to place higher in the league than we have the last couple of years and would like to make a deeper run in the tournaments as well.”

Despite the graduation losses of Angie Romano and Arielle Walter, Berkshire returns five all-conference performers from last season and has an influx of young talent ready to make their mark on the program.

Leading the way for the Badgers are returning first-team All-CVC honorees Maddie Smetana and Sierra Berman.

Smetana, a junior right side hitter, recorded 251 kills, 30 aces, 23 blocks, and 119 digs as a sophomore on the way to earning first-team all-district and second-team News-Herald honors.

“Maddie is coming off a season where she led the team in kills and we are expecting the same kind of production from her this season,” Prots said. “Maddie is a mature player and her game has improved each year. Maddie is very competitive on the court and will provide leadership in the front row.”

Berman, a senior outside hitter, put down 122 kills with 15 aces and 186 digs. She was named second-team all-district.

“We are looking for Sierra to be a leader on the court this season,” Prots said. “We look for her to stabilize the serve receive for us as we break in some new passers. In the front row, Sierra is a very smart player who can play both the power and finesse game when needed. She sees the court very well.”

Senior Maddy Triskett spent the past three seasons setting the offense and this year she’ll move to the back row to solidify the defense.

She recorded 39 aces, 228 assists, and 141 digs last fall on the way to earning second-team all-conference and honorable mention all-district honors.

“Maddy has been a setter in our program for three years. This season she is being asked to switch to a DS position,” Prots said. “Maddy has embraced it with open arms and is working very hard in her new role. We are looking for her court awareness and leadership skills to fill the passing void left from graduation.”

Taking over at setter is junior Sammi Winter, who earned honorable mention all-conference honors last year in a backup role. She recorded 274 assists, 100 digs, and 57 aces.

“We are looking for Sammi to run our offense from the setting spot with as much consistency and intelligence as she did last season,” Prots said. “Sammi is a very smart player on the floor. She is always encouraging to the other girls and keeps the hitters believing in themselves.”

“Haley is one of the most intense players we have on our team,” Prots said. “Her work ethic and willingness to go the extra mile have helped her game improve tremendously since last season. I look for Haley to play an even bigger role in the middle for us this season.”

Freshman Marissa Rish rounds out the projected starting rotation. She’ll set and play on the right side.

“Marissa is being asked to step in as a freshman and compete,” Prots said. “She has a lot of big game experience already because of her JO experiences. She will set and be one of our weapons when she is in the front row.”

Berkshire’s success this season hinges on the team’s ability to play consistently and spread the wealth.

“We have to be consistent and work as one group at all times,” Prots said. “And, as always, pass the ball.”