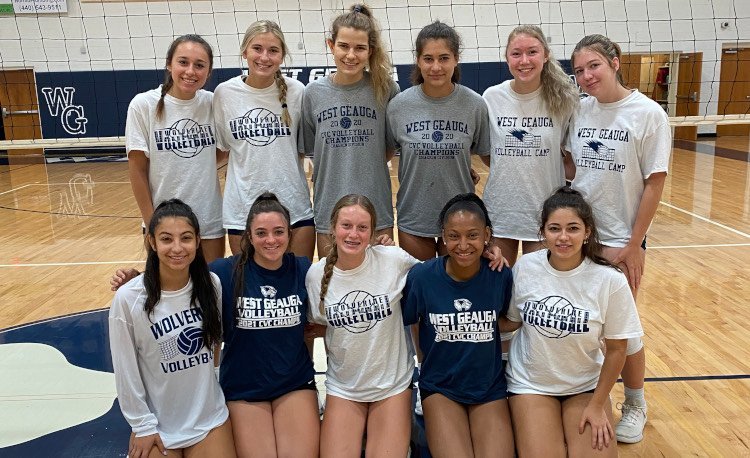 After winning back-to-back conference titles, West Geauga’s volleyball team is in no hurry to relinquish its title.

The Wolverines, who finished last season with a 15-6 record overall and a 9-1 mark in the Chagrin Valley Conference Chagrin Division, return their top two hitters and several other key pieces of the puzzle.

Head coach Amber Baker will have to replace setter Hannah Laurich, but freshman Malory Lear is up to the challenge.

“This season, we are returning some very strong offensive players including the top two kill leaders in the Chagrin Valley Conference,” Baker said. “We lost our setter, Hannah Laurich, who I had setting on varsity for me for four years. Those are humongous shoes to fill, but I’m starting off with a fresh face who just happens to be a freshman, Malory Lear. She’s extremely fast and gets to every ball. She is dedicated and determined to be the setter that this team needs and I don’t have a single doubt in the world about her ability to do so.”

Lear’s job is just a bit easier thanks to the return of seniors Kaitlyn Danszczak and Kayla Herbst, who recorded 203 and 139 kills last season, respectively. Gisela Glodowski also will contribute to the attack. She finished her sophomore season with 26 kills.

“We still have Kaitlyn Danszczak, who will be playing all the way around for us,” Baker said. “She’s a huge powerhouse and can attack from anywhere on the court. She is also so strong in the back row she could be a libero if needed. I have both of my middles back, Kayla Herbst and Gisela Glodowski. They are both juniors and can hit a multitude of sets, and are both strong blockers.”

Defensively, the Wolverines are thin after graduation losses but Monika Velazquez and Grace Laster return to bolster the back row along with some new faces in the lineup.

“I lost two core defensive players last year and I am trying to replace them with returning varsity players Monika Velazquez and Grace Laster,” Baker said. “I am adding Bella Intorcio to the defense as well. We are improving each day on our defense and I believe they will get the job done. If our defense is struggling I believe I have a strong set of reserves on the JV team that could help us out.”

Make no mistake, West Geauga’s attack is going to drive the Wolverines’ success this season.

“Our offense is our strong point so I will try to force us to stay in certain rotations for an extended period of time with our strong hitting,” Baker said.

“All three will be huge contributors for us and I will be leaning on them to help in the back row as well,” Baker said. “(Molly is a) very smart and reliable hitter.”