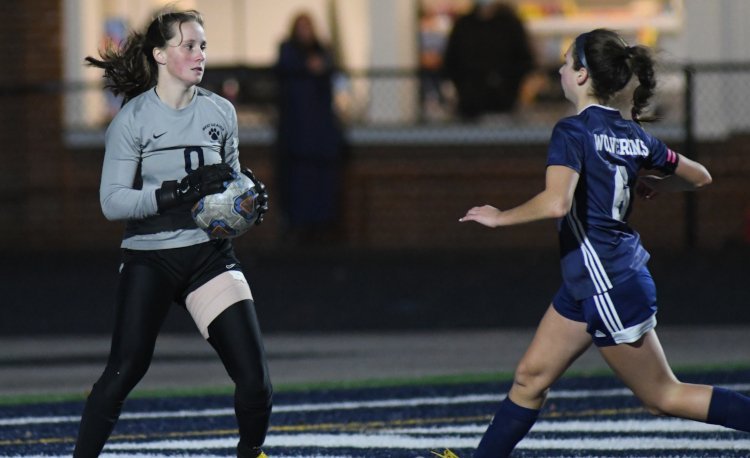 “I am very excited to be playing soccer at the next level at a very good soccer program and looking forward to getting to train in a very high intensity and competitive environment on the soccer field at a Division I program,” Drayer said. “I am also very happy with the academic side at the university with having many of the engineering programs I am looking at.”

Drayer competed at Marshall’s ID camp back in July and left quite an impression on the Marshall coaching staff.

Marshall reached out in October to let her know they were looking for a goalkeeper and wanted to see her in action again.

That happened at a showcase in Tennessee earlier this month and a scholarship offer followed.

“After the first game of the showcase, they called and offered me a spot on their team on December 2,” Drayer said. “A week later, I had verbally committed on December 9. This process was very difficult but turned out very well in the end because as soon as I saw Marshall I fell in love with the school.”

“My decision on Marshall was because of the great coaches at the program and that I fell in love with the campus immediately,” she said. “It’s a smaller campus with lots of grass and open area just outside the city. It was exactly what I wanted in a school–smaller class sizes, out of the city, within my five-hour limit from home, and having a lot of open area. On the soccer side of things, I loved how the goalkeeper coach ran his training sessions and that was a very big part of my decision was the type of goalkeeper coach I would be training with. The other coaches I didn’t get to spend a lot of time with but liked everything they did at the camp, and I really liked the few players I got the meet at the ID camp.”

Drayer will continue protecting the net in college.

At West Geauga, she closed out her career with 406 saves and 31 shutouts.

As a senior, she was named All-Chagrin Valley Conference and second-team All-News Herald.

She helped lead West Geauga to the regional championship game with 174 saves as a junior.

“I think I will fit in very well with the team because I have been training at a very high and competitive level with my club team and also my private goalkeeper training sessions with a coach who has previously played pro and coached professional players,” she said. “I will bring a lot of knowledge at the goalkeeper position as well as being a very competitive player and hopefully, be getting minutes my freshman year at college.”