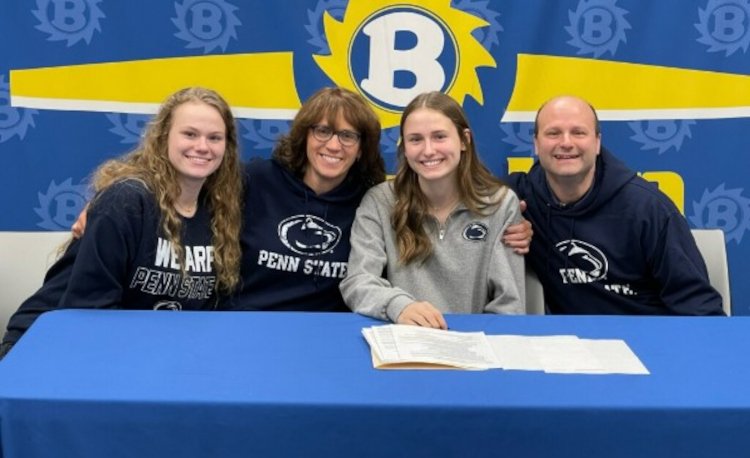 “I’m really excited to go to a new place and start fresh and meet people to push me to do better,” Young said. “I really just want to blossom there.”

Young made an unofficial visit to Happy Valley over the summer and returned last month for an official visit.

“It was amazing,” Young said. “It was really nice to meet all of my (future) teammates. They were very welcoming.”

“They were very welcoming and they, in a sense, made it feel like home and it was very comfortable,” she said. “We did go and watch practice there and everything. It was really nice and all of them said hi to me and made me feel like I wasn’t an outcast. They go there to work and work as a team, even though it’s an individual sport, they all want to see each other succeed.”

With her college decision out of the way, Young is ready to focus on her senior season and also on defending her state title.

“It’s definitely a weight off my shoulders,” she said. “A lot of (colleges) were telling me I had one more year of high school left and to just do it and have fun. I’m definitely excited to get back to where I was and grow because now I don’t feel like I’m having to perform for any specific school and that bar is kind of set already. I’m just really excited to see what I can do and do even better the next four years.”

With an enrollment pushing 600, Brooklyn isn’t exactly a hot spot for college recruiting but Young is at least the fourth Hurricane in recent years to lock in the opportunity to compete at the NCAA Division I level.

Jaden and Julia Walz both play volleyball at Bowling Green and their brother Jack played football for the Falcons.

Young no doubt was inspired by the Walz siblings, and she hopes future Hurricanes view her the same way.

“Even though we go to this small school, if you really put your mind to it and work hard at what you love doing, you will go far and it will take you places that you maybe won’t think you can like in freshman year,” Young said. “Hopefully, I see other people on my team doing that this year as well because it’s always been a dream of mine to go to college and play a sport that I love. I like inspiring them, but I try to be very humble about it going to school because I know a lot of people work hard but sometimes, they can’t go as far as they want to go, but I hope they see this and get motivated by it.”

Young, who will continue her high jump career at Penn State, plans to major in psychology with a minor in business.