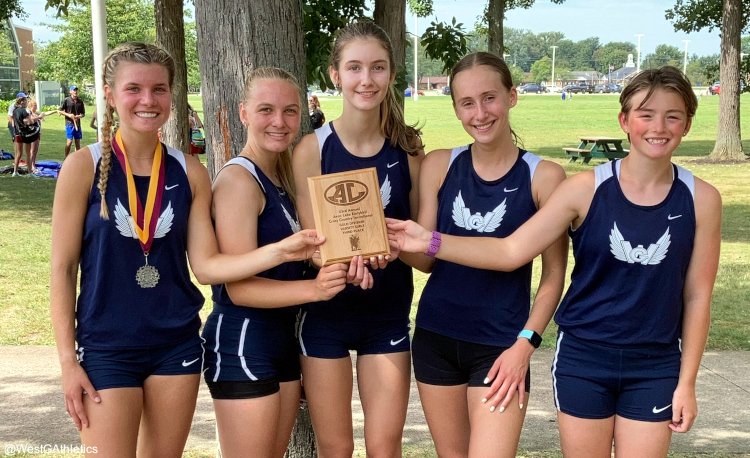 West Geauga senior Grace Gyetko spent the 2020 sidelined with an injury but she made up for lost time with a second-place finish at the Avon Lake Early Bird Invitational at Lorain Community College on Saturday.

Gyetko, who finished in 19:48, paced the Wolverines to a third-place finish as a team.

“Last September, I had surgery on my foot for a broken sesamoid bone. I had been injured for months prior to that but had hopes of being able to run for at least the end of my junior season of cross country,” she said. “Losing my entire season was beyond heartbreaking, but keeping my senior season in mind motivated me to get back into a condition I could be proud of. Using last track season to train and build strength, I have finally reached the level of fitness I was aiming toward since post-surgery. I’ve never worked so hard for anything, and I am hopeful that we see the hard work pay off this season.”

While she placed fourth, Gyetko wasn’t pleased with her 20:17 finish and focused during the week to drop valuable seconds at the Avon Lake race.

“Coming off of a disappointing time last week, I was very satisfied with my time at Avon Lake,” Gyetko said. “I knew the course would be fast and would offer a great opportunity to run a time I could be happy with. My goal on the start line was to stay up in the top pack and run below 20 minutes. The second mile of a 5K is always my weakest, so I focused on staying strong during that second mile then picking up the pace the final mile. Overall, I feel that I ran my best race possible on the given day and will continue to work on my weak spots throughout the season.”

Gyetko’s top-two finish was both reassuring and inspiring.

She now knows the hard work rehabilitating her injury paid off and she’s ready for the challenges she’ll face this fall.

“I am super excited coming off this race and can’t wait for the rest of the season,” she said. “It’s definitely exciting seeing the work I put in over the summer pay off this early in the season. My whole team has started the season in a really great spot and I am proud of every runner for that. We are all using early races like these to motivate ourselves to run faster and faster each week. Seeing as it’s just the second meet, I see room for improvement and plenty of time to do so.”

Bradyn Rusch led Cuyahoga Heights with a time of 18:44, good for 18th place, and Kyle McGovern paced the Blue Devils. He finished 31st in 19:14.

Kirtland’s girls’ team, led by Sylvia Vosicky, who was 10th in 22:19, placed seventh in the Gold division.

Independence’s Alana Nowak was the fourth-fastest runner in the Gold division as she finished in 23:10 to lead the Blue Devils to an eighth-place finish as a team. Gabby McGreevy also placed among the top 20 with a 17th place finish in 23:10.

Cuyahoga Heights placed 12th as a team in the Gold division and Lutheran West was 10th in the Maroon division.

Katie Jirousek paced Heights with a time of 26:26 and Abbey Hammer-Huber led the Longhorns in 24:52.