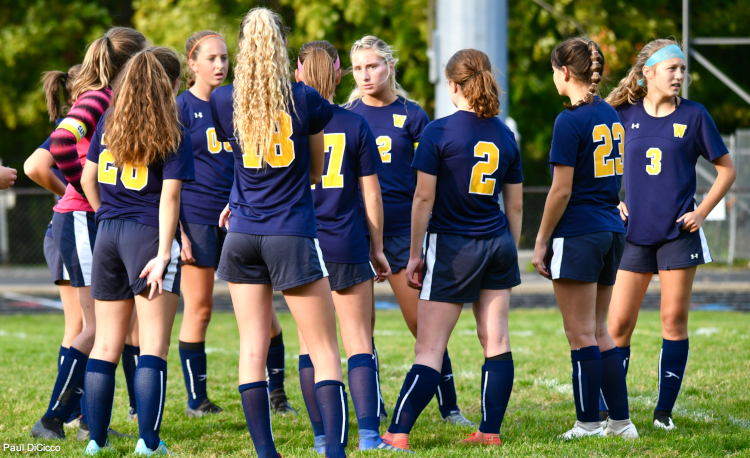 Mia Welms opened the scoring in the first half but it wasn’t until Morgan Gabriel’s goal early in the second half that the Blue Devils took control of the contest.

“I’m proud of the team’s performance tonight,” Wickliffe coach Steve Gribovicz said. “They played well in all phases of the game. Even with the weather conditions, they were able to possess and build the attack from our back lines to the front. The defense was fierce tonight, not allowing the opponent to create quality attacks. In the second half, patience was exhibited and the team opened the game up to a comfortable lead.”

Welms finished off a Gabriel corner kick with an accurate header to break a scoreless tie in the first half.

Gabriel then made it 2-0 just one minute into the second half.

“Morgan Gabriel’s goal in the first minute of the second half was a big momentum changer that gave the team confidence and spurred the second-half attack,” Gribovicz said.

Eliza Wills later scored to make it 3-0 and Gabriel then bent a corner kick into the net for her second goal of the night.

Wickliffe’s Kaylee Lauriel recorded one save in notching her sixth shutout of the season.

Central Catholic’s Taryn Codispotl was under assault for most of the game as she finished with 17 saves.

The Blue Devils, who improved to 10-6-1, will play at Independence on Thursday in the second round.