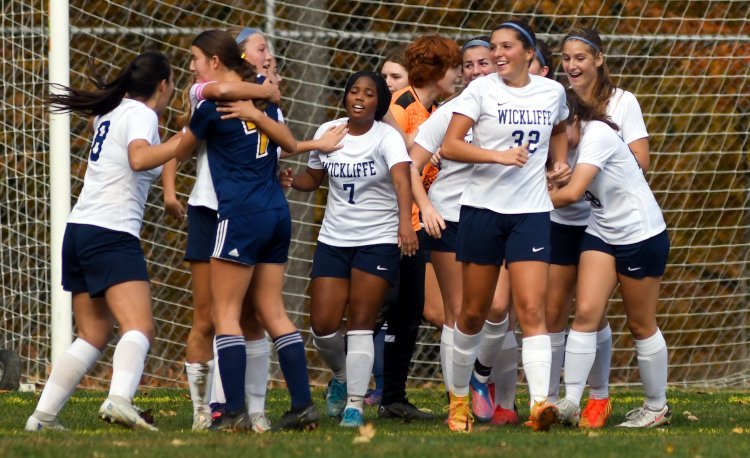 KIRTLAND—Alteaire Sanders was in the right place at the right time to lift Wickliffe to a 1-0 double overtime win at Kirtland in a Division III district semifinal on Tuesday.

The win for the Blue Devils was the first over the Hornets in 17 tries.

“We say in the summer that every player matters from number one down to 17 or 25, however many you have on the team, and this is the reason why,” said Wickliffe coach Steve Gribovicz. “I don’t know that Alteaire knew if she was going to start or even be in her spot, and she came up huge.”

Sanders, a freshman, has played sparingly this fall. She had scored one goal with one assist prior to her overtime game-winner.

“She has been in a few games here and there, probably not as much as some others on the team, but whenever we need her to come in she comes in and gives her all. She’s usually a defender.”

After nearly 14 scoreless minutes of the double overtime period, the Blue Devils pushed possession into the upper corner and a loose ball off the foot of Leah Skufca found its way in front of the Kirtland net.

The ball spun away from the Kirtland keeper and Sanders tapped it in.

“I was very excited because I didn’t want to let my teammates down,” Sanders said. “I don’t even know who passed me the ball, but I yelled, ‘I’m open on the left,’ and the goalie, she dropped it out of her hands. A Kirtland player was coming straight to me. I looked at the ball and just put it in, I didn’t care what I was doing or where I was at, I just put it in. I couldn’t have done it without my teammates or my coach.”

Wickliffe entered the second overtime short-handed as three players were injured in the first portion of the game on Monday.

That didn’t stop the Blue Devils from giving maximum effort for 14 minutes on Tuesday.

“Our major message the past two days was to be grateful for the opportunity to play,” Gribovicz said. “Only so many teams are still playing at this time of the season, and enjoy the experience on the field. Obviously, our community came out to support them yesterday and today, and everybody in the community believes in them, they just have to believe in themselves. I think you saw that on the field today.”

Cade Virgilio recorded nine saves in goal with plenty of help from her defense.

“I’m extremely proud of our defense,” Gribovicz said. “We preach defense first and that will lead into our offense. Our back line, our mids, Virgilio in the goal, everybody came up big. To keep Kirtland scoreless through 109 minutes is an impressive feat and I just hope these girls understand what they’ve been able to do these past two days.”

Wickliffe is now 1-16 all-time against the Hornets, who saw their season come to an end with a 9-6-4 record.

“Congratulations to Wickliffe,” said Kirtland coach Ed Bradac. “Steve has done a great job with Wickliffe and we’ve been to the high end and low end of the wall. I told the girls I would rather have played the game and lost than never to have played the game. It hurts, but the joy of actually playing the game is what it’s all about and to be with your friends. The result wasn’t what we wanted, but sometimes it’s a cruel game.”

Seventh-seeded Wickliffe advanced to play No. 3 Norwayne in a district championship game on Thursday at Revere High School.