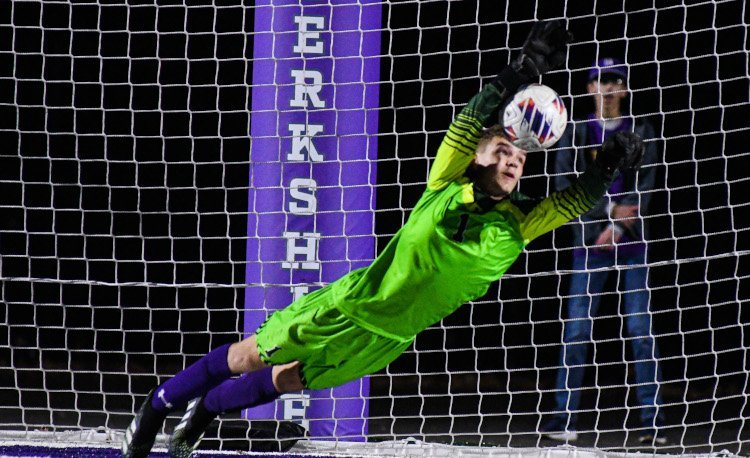 BURTON—Following a 1-0 shootout victory over visiting Independence on Tuesday, Berkshire’s boys’ soccer team advanced to play in a Division III district championship game for the first time in school history.

The Badgers outshot the Blue Devils in two rounds of penalty kicks, 6-5, to win the game.

“This is absolutely exciting,” said Berkshire coach Nick Fejedelem. “Going into this game, we knew it was going to be a grinder of a battle after our tie with them earlier in the year. We both had some kind of vengeance coming into this game. We’ve been working on our PKs every single week, we take at least one or two days and work on taking well-placed PKs, so I was confident going into the shootout that we were going to put it away.”

Berkshire and Independence battled to a 1-1 tie during the regular season and that deadlock extended through the 80 minutes of regulation in Tuesday’s district semifinal.

“We were working our possession game the entire time, just trying to pull it out and look for openings,” Fejedelem said. “We just couldn’t connect on our shots towards the second half.”

The Badgers amped up their intensity in the final eight minutes of regulation but all three of their quality shots were turned away by Independence keeper Landon Jatsek.

Even that wasn’t enough as both teams connected on four PKs in the first round to force a second shootout.

The second round of penalty kicks would determine the winner when one team converted a kick and the other missed.

Billy Mooney and Ryan Kessinger both hit their PKs for the Badgers but Independence went 1-of-2 in the second round with Berkshire keeper Roman Percic making a diving save on the second to seal Berkshire’s historic win.

“My confidence didn’t wane (after the PK miss in the first round),” Fejedelem said. “It just made it more of a challenge. It really added a competitive factor to everything and the laser-focus Roman had in the second round to make that save. He’s one of the hardest, if not the hardest, working kid I’ve ever had on a soccer team. For a freshman to show the energy and intensity and the competitiveness he shows, it’s like he’s a junior or senior out there.”

With the win, the Badgers improved to 15-3-2 overall and advanced to play Norwayne in a district championship game on Saturday.

“This is our best result in school history,” Fejedelem said. “We’re going to use that as motivation going into Saturday. We haven’t been to the district final as a program, so we’re just going to keep working on the things that we’re successful at.”