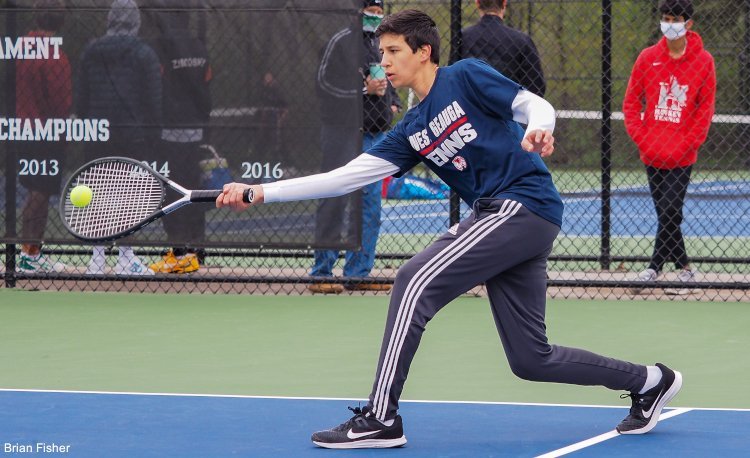 “We have a strong group of guys playing singles this year and we return most of our doubles players from last year,” DiMattia said. “We lost a few seniors from last year, including our No. 1 singles player, but Michael Wenger, a freshman, has come in and earned the No. 1 spot this spring. We return five other players from last year’s varsity squad, and round out our top seven with a JV player from last year who was one game away from going to the district tournament while filling in for us during sectionals last year. We still have to deal with the incredible teams in our conference this season, but I hope to be able to compete with them and try to mix things up this year.”

DiMattia is confident the Wolverines will build off last season’s success.

“With losing only two seniors from last year, and the addition of Michael to the team, we should pick up where we left off last year,” he said. “I think we may actually be a little better this season. Record-wise last year, we weren’t great, but we had a lot of close competitive matches. Once we got to sectionals, it really paid off for us. We had quite a few guys make it to the later rounds of sectionals.”

Wenger quickly established himself as the team’s starter at first singles.

“He came into practice and didn’t back down from the guys who have experience and earned the No. 1 spot,” DiMattia said. “I don’t think he will back down from anybody.”

With Wenger at first singles, sophomore Andrew Elias will fill the No. 2 singles slot.

“Last year, he was dealing with a leg injury that held him back,” DiMattia said. “He is healthy now and I have been really impressed with his play so far. Andrew has been playing well, and more importantly, he is playing confidently. His freshman season, he was a little timid, and between that and his injury, he never really got into the swing of things, but he is back, he is healthy, and he is hitting the ball very well.”

“Trent was No. 2 last year, and though he didn’t have a pretty record, he was one of the smartest players I have seen in a while,” DiMattia said. “Having him drop to No. 3 I think will allow him to get quite a few more wins for us this year.”

The Wolverines will send four seniors into the doubles competitions.

Jacob Harris and Isaiah Hinds will play first doubles while Tommy Mansfield and Danny Koba will compete in second doubles.

“For doubles, we have three of the four doubles players last year returning,” DiMattia said. “Jacob Harris, who played seconds doubles last year, will be joined by Isaiah Hinds, who made spot appearances last season on the varsity team. Jacob’s experience and consistency will be a good mix with Isaiah, who is long and active at the net. Danny Koba returns to second doubles and will be joined by Tommy Mansfield, who played first doubles last year. Again, they have experience and they are both pretty good tennis players.”

West Geauga’s depth should lead the Wolverines to a more competitive season this spring.

“With the depth that we have and the number of returning players, I hope to compete against the CVC schools in our league, and hope to win most of our non-conference games,” DiMattia said. “It should be an exciting spring for West G tennis.”

At the same time, DiMattia knows his team will be tested early and often this spring, especially in conference play.

“The biggest challenge we face this season is our schedule,” he said. “Having to play Hawken, Orange, Chagrin, and Beachwood twice is never fun. Orange, Chagrin, and Hawken all sent people to state last year. Orange and Chagrin both had state champions, so I guess you could say it is a pretty competitive league. It will be interesting to see how we compete against them, but even if we get thumped, it will help us in the long run come tournament play.”