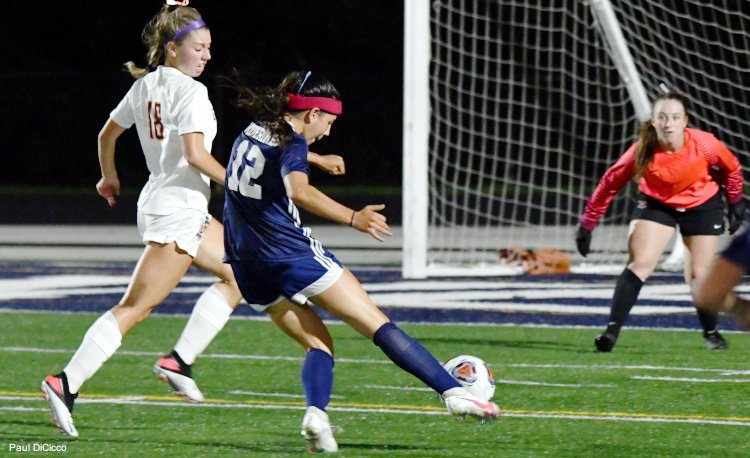 Despite losing several key players to graduation, the West Geauga Wolverines are aiming high in 2021.

The Wolverines return eight starters from the team that finished 15-4 overall and 5-0 in the Chagrin Valley Conference Chagrin Division and won a district title.

“For the 2020 season, this year is a ‘sky’s the limit’ kind of year,” said fifth-year head coach Kori Jesenovec. “Our seniors and our leadership are very well-respected by their peers and the work that they put in and the genuine belief they have in their teammates creates such an infectious culture within our program that I am excited to see where that takes us.”

West Geauga’s graduation losses won’t easily be replaced, but the Wolverines have plenty of returning talent. Success this season is dependent on that core group rising to the challenge.

“We lost the spine of our team in Aubrey and Bailey Zanella and Nicola Ehrbar. We also lost some great leadership qualities that those girls brought to the team,” Jesenovec said. “Although they aren’t here, they helped shape our team culture and set a standard that I see has trickled down to our returning players as part of our mentality.”

The Wolverines return one of the most dynamic attackers in the area.

“Over the past two years, Frankee has become a top priority for our opponents to watch out for, not just because of her goal-scoring ability, but also for her outstanding athleticism and relentlessness to do whatever it takes to get the result for her team,” Jesenovec said. “As a co-captain this year, Frankee has earned the genuine respect and dedication from her peers and humbly encourages all those around her to reach their utmost potential.”

“As our lead captain, Rae has set the standard on our team as to how to work hard, treat others on the field, and see the field,” Jesenovec said. “Her soccer IQ and the support and respect her teammates give her are just a few of the natural qualities in her as our leader that are going to make Rae’s senior season extremely special for our program.”

“Holly’s workhorse mentality and ability to disrupt opponent’s midfield play are going to be vital for our team’s success this year,” Jesenovec said. “Megan’s bravery and fitness will bring a lot of challenges to our opponents on both sides of the ball. Her versatility on the field will provide our team multiple options for formation and strategies as we approach games.”

Drayer recorded 60 saves and seven shutouts during the 2020 regular season. She was named honorable mention All-CVC.

“Zoe’s soccer IQ and patience in defense will be a huge asset to our team and provide great opportunities to possess out of the back,” Jesenovec said. “Ashlyn’s ability to come up with big plays in big moments in big games has grown significantly over the past couple of years and in her third year, I’m excited to see the next level she will lift our program.”

Jesenovec has reason to be optimistic this season but she knows opponents aren’t going to roll over for the Wolverines. Her players have to rise to the challenge and that begins with each player embracing the team’s philosophy.

“Control what you can Control,” Jesenovec said. “This theme was something that resonated with me during my career at Penn State under Coach Erica (Walsh) Dambach. Especially with what has been going on over the past year and a half, our success will be solely determined by our preparedness one game at a time. By playing to our standard every game, we will be able to control possession and not allow our opponents to have opportunities to exploit our weaknesses. We do a great deal of film analysis and we will be constantly evaluating ways to improve throughout the season.”