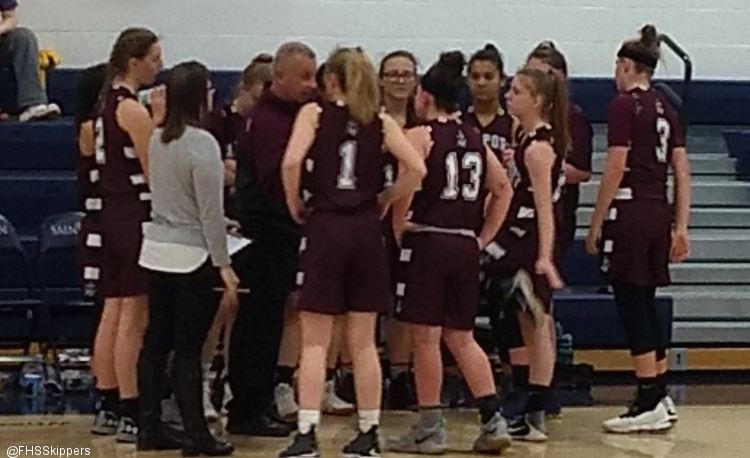 Ryann Hagedorn scored a game-high 16 points and Emily Tully added 13 to lead Fairport Harding to a 56-42 win over visiting Mentor Christian on Thursday.

The win was the first for the Skippers, who have six freshmen on the roster and three in the starting lineup.

“This is by far the best game we’ve played all year as far as scoring,” Fairport coach Ed Reed said. “It’s been a battle and Mentor Christian gets after it. We struggled a bit at the guard position tonight running some freshmen guards but we moved the ball as best we could.”

Reed started the year hoping he’d have a solid core of upperclassmen to mix in with a large group of freshmen and then Paige Hagedorn went down with an injury and the Skippers were left with six freshmen, a sophomore, three juniors, and one senior.

“It’s been tough on us this year with my freshmen,” Reed said. “We have 11 girls and without Paige, we ended up with six freshmen, a sophomore and one senior. We had seven freshmen but one is injured. All of the freshmen play and they’re all tough, scrappy little players. The future is going to be bright for us in the next year or two.”

They pulled away in the second half largely due to the work of freshman Olivia Eldridge under the basket.

“Olivia is by far the best rebounder on the team,” Reed said. “She’s a 5-foot-8 freshman and a really good athlete. Olivia would get the ball and kick it out to Ryann for the 3 or the 2 or we’d get it back to her and she’d move it to the left block or the right block and score.”

Freshman Sam Collins helped to beat Mentor Christian’s press and set up the Skippers in their offensive sets.

“She’s lightning fast and all over the place,” Reed said.

The Skippers finally tasted success this season, which will help keep their spirits up in what has been a tough season.

Reed knows it might even get worse before it gets better but he also knows the experience will prepare the Skippers for even more success down the road.

“We have a tough road ahead of us with Cuyahoga Heights (on Friday) and Kirtland next Wednesday,” Reed said. “It’s a challenge for us. The girls see right away coming from eighth grade to playing 16 and 17-year old girls in a varsity schedule that it’s tough. They’re enjoying it and not getting down on themselves.”