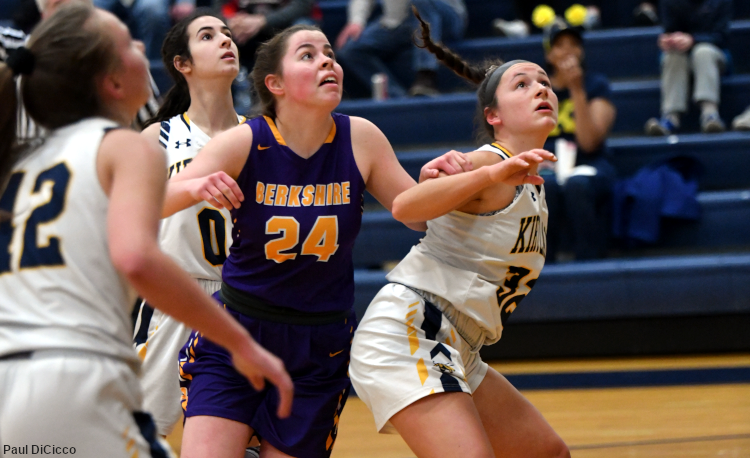 During the regular season, Kirtland defeated Berkshire twice by an average of 32.5 points per game.

The Chagrin Valley Conference Valley Division rivals met on Saturday for a third time and a sectional title. Kirtland won the game, 51-22, but it didn’t come easily.

“I’ve said it before, tournament time is crazy,” Kirtland coach Brittany Zele said. “We approach each game with respect knowing it could be anyone’s good day.”

The visiting Badgers enjoyed some success as they tied the Hornets after the first quarter, 10-10, but the day belonged to Kirtland’s Amber Yurick, who finished with a game-high 16 points.

“It was extremely exciting seeing that I was able to perform to the best of my ability today and do my part,” Yurick said. “I felt good going into the game; however, it was an even better feeling in the second half when we were all able to finally get a solid momentum rolling to pull away.”

Yurick scored four of her eight first quarter points from the free throw line as she finished the game 6-for-6.

“My focus going in the game today was to go up strong for both rebounds and layups,” she said. “I know Berkshire can be physical so I knew that I’d be able to draw contact and get fouls to score from the free throw line as well, which made a huge difference for me.”

Berkshire spread the wealth in the first quarter with Kylie Neumore, Lexi Boyk, Lydia Kastor and Maddy Triskett hitting from the floor and Mollee Chapman added a pair of free throws.

Kirtland’s defense buckled down in the second quarter and the Hornets went on to outscore the Badgers, 10-2, in the period and 31-10 in the second half.

“We started making better decisions on offense is what it came down to,” Zele said of the final three quarters.

The Badgers were successful in limiting Kirtland’s leading scorers Lauren Snyder and Julia Camino to just seven and nine points, respectively, but Kirtland proved it had the offensive balance to counter.

Yurick and Reilly Greenlee, who finished with 10, both scored in double figures and Haley Coso (6), Macy McIntosh (2) and Leah LaVerde (1) also contributed.

“We have seven girls who have been leading scorers in different games all year,” Zele said. “Amber has been one of the most recent to peak and it’s been amazing to see. If that’s the route that is taken on the opponent’s end, I have no doubt that any of the other girls will step up as they have been. It’s all about strategy and having multiple plans. We will not be unprepared.”

The Hornets, who improved to 19-4, advanced to play Garrettsville Garfield in a Division III district semifinal at Cortland Lakeview on Wednesday.

A win over the G-Men would be the first for the Hornets in a district semifinal since 2010 when the school was in Division IV.

“When I was brought on in May, this has been my goal from the start, to win a district title,” Zele said. “I have talked about it all year long. The girls know the opportunity that is ahead of them. They are ready, focused, and hungry for this challenge.”

“For us to continue to advance and head to the district finals, I think that as a team we need to continue to keep our heads in the game mentally from start to finish and cut out avoidable mistakes,” Yurick said. “Throughout the regular season we’ve become a huge defensive threat; we need to continue to sharpen our offensive end as well to remain strong on both ends of the court.”