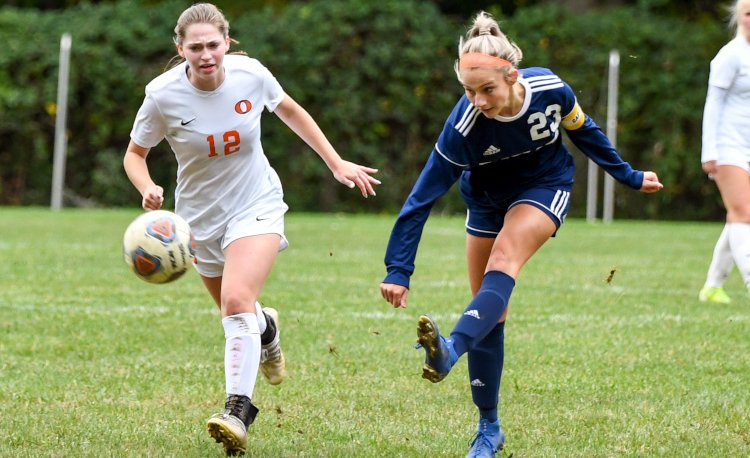 Erika Zschuppe, Kirtland’s all-time career scoring leader, added another impressive statistic to her resume when she recorded her 150th goal in a 7-0 win over visiting South on Tuesday.

Zschuppe scored three goals in the win and now has 28 in 11 games this season.

“Scoring 150 goals means a lot, but I couldn’t have done it without any of my teammates now or in past years,” Zschuppe said. “It’s funny to me when the freshman comes up to me at halftime saying ‘one more,’ when I didn’t even know I was at that many goals. It just means so much that I have those people playing with me.”

Kirtland has had its share of standout players who helped to develop the program into one of the finest in the state.

Zschuppe benefited from playing with many of those great players and she has done her part to help keep the program moving in the right direction.

“It is nice to have quality players that I can compete against, not only during games, but even in practice,” she said. “Going against my own defensive line at practice is never easy and I couldn’t imagine how other forwards feel. However, going against quality players is always tricky because you don’t know what they know about you, so it’s always competitive. Thankfully, with the quality we have on our team, we can make anything work and I’m proud of them for everything they have done this year.”

While her success happens on the offensive third, she credits her defensive teammates for their effort in winning possession and pushing the ball her way.

“The only way to create those chances for me or my teammates is to defend and attack as a whole,” she said. “If everyone plays their part, then we shouldn’t have a problem getting through an opponent’s defense.”

Zschuppe also recorded an assist in the win.

Reilly Greenlee contributed to the win with a pair of goals and an assist while Claire Davidson and Stephanie Drazetic both scored one goal and added an assist.

Giuliana Vladic led the Hornets with three assists and now has a team-best nine on the season.

Kirtland improved to 7-1-3 on the season.