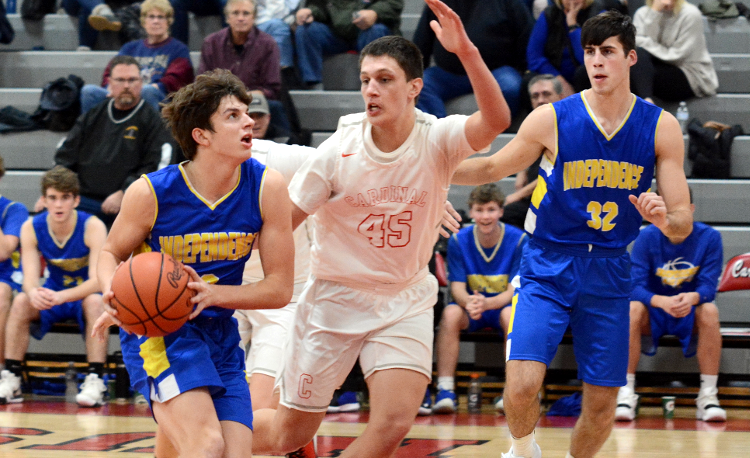 MIDDLEFIELD—Kyle Zygmunt and Wyatt Flynn combined to score 41 points to lead Independence to a 69-46 win in a Chagrin Valley Conference crossover game at Cardinal on Friday.

Zygmunt scored a game-high 22 points and Flynn added 19 in the win.

“They’re our two guys right now and we knew that coming into the season,” Independence coach Kyle Johnson said. “Kyle did a nice job of just attacking the rim. He didn’t shoot particularly well–he missed a couple layups–but he stuck with it. Wyatt does such a nice job of getting offensive rebounds and we do a nice job of finding him.”

Zygmunt and Flynn scored 12 of Independence’s 14 first quarter points as the Blue Devils jumped out to an early 14-8 lead.

The Blue Devils led by as many as five in the second quarter before a Cardinal 11-point run gave the Huskies a 30-23 advantage.

Justin Detweiler, who led Cardinal with 16 points, started the rally with a one-and-one. He converted one of two free throws off a technical foul but Casey Horner pulled down the offensive rebound and scored and Hunter Schaeffer drained one of his four 3-pointers before Matt Richards hit back-to-back baskets to stop the run.

“They made their run and we put our head down and started pouting and feeling sorry for ourselves,” Johnson said. “I said, ‘Guys, teams are going to make runs but you can’t hang your head.’ You have to have to worry about the next play constantly and right now we’re not there yet but we’re getting better. That’s an improvement.”

The Blue Devils closed out the half on a 7-1 run and carried that momentum into the second half.

“In the first half, we weren’t able to make a shot to be able to get into our press so that kind of hurt us early on,” Johnson said. “We didn’t come ready to play again and that’s been our M.O. When we come ready to go, good things happen. It’s been hit or miss right now but we’re trying to establish a routine of we’ve got to bring it every time, we’ve got to bring energy. We got on them a little bit in the locker room and they responded well. We held them to 14 points in the second half. You can’t ask for anything better than that out of a team.”