Independence improves to 5-0 with win at Berkshire 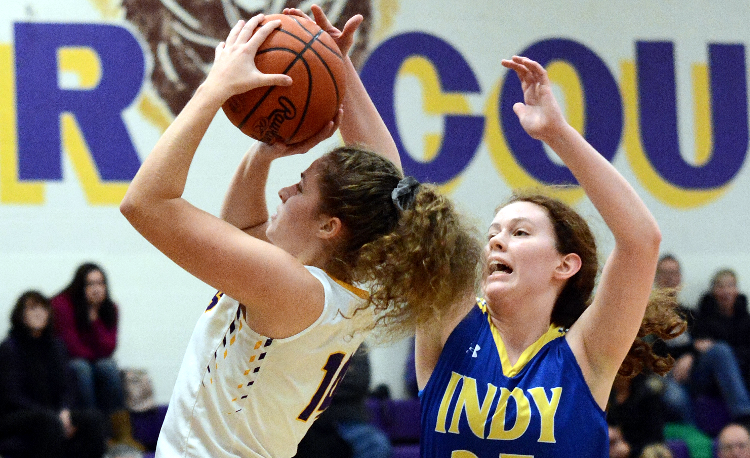 BURTON—Independence scored the first 15 points of the game then held off host Berkshire the rest of the way in picking up a 65-41 Chagrin Valley Conference crossover game win on Saturday.

“We had a lot of rust to get off,” Independence head coach Mike Marcinko said. “We hadn’t done anything in 10 days. We played on the fourth and hadn’t had a game since. As much as you try to replicate it in practice, you can’t; it’s just not the same.”

Whatever the Blue Devils did in practice worked as Riley Wilson scored 11 of her 13 points in the first quarter and Independence forced several Berkshire turnovers, which turned into easy layups.

“We got them turned over early and got us some breathing room and went from there,” Marcinko said.

The Blue Devils, who improved to 5-0 overall, weren’t without adversity.

Point guard Haylee Dmitruk got caught up in early foul trouble, leaving freshman Natalie George and sophomore Anna Weber in charge of setting up the offense.

“I thought everybody stepped up and did the best they could in the situation and produced,” Marcinko said.

Weber finished with 17 points, second on the team to Madison Stepanik, who dropped in a game-high 18.

“Both have been trending well,” Marcinko said of Weber and Stepanik. “Anna has been playing complete games and not just scoring. She’s at the stage that now you almost expect it. She’s scoring and rebounding, scoring and defending, handling the basketball for us. Haylee got in foul trouble and now we’re relying on a freshman in Natalie and we’re relying on Anna and she stepped up and did it. Madison did her job too.”

“What I didn’t like about us was losing our composure with some of the pressure stuff,” Marcinko said. “Some of it was gals that normally wouldn’t have the ball in our press offense had the ball, so you’re asking them to maybe do a little bit more. Most times through the game they did but there were those one or two-minute segments a couple times through the game where we got rattled and lost our composure as basketball players to connect the dots and score.”

Dmitruk closed out the game with seven points and Brooke Pillar and Riccela DiGeronimo both contributed with four. George added two for the Blue Devils.