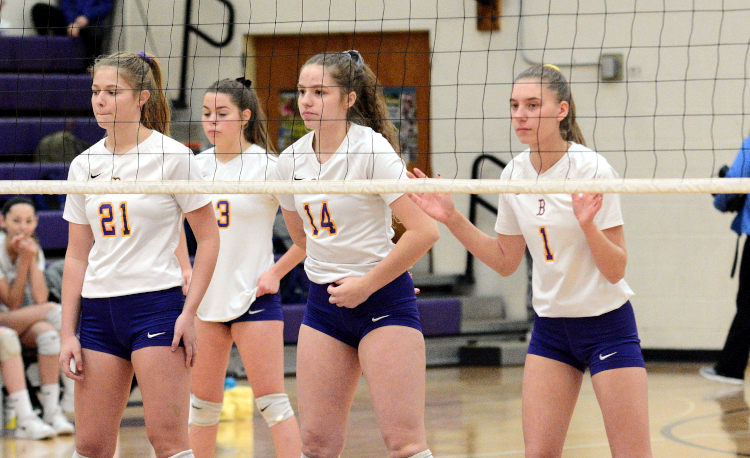 BURTON—Thanks to COVID-19, Saturday’s season-opener had a different look and feel to it but Berkshire’s volleyball team focused on the task at hand and defeated visiting Chagrin Falls, 3-1.

The Badgers, who swept both preliminary matches, opened the varsity showdown with 25-19 and 25-13 wins. Chagrin Falls rallied for 25-20 win in the third set but Berkshire closed out the match with a 25-17 win in the fourth.

“It’s always good to start the season with a victory,” Berkshire coach Joni Prots said. “As crazy as the summer and preseason has been, it was nice to finally get to just play. This group put in the work in the offseason and preseason and it was nice to see some of that pay off today. We still have things to work on but it was a good day.”

Seniors Mollee Chapman and Delaney Tucek led the Badgers on the court and on the stat sheet.

“I thought both Mollee and Delaney played really well today,” Prots said. “They stepped up and did their jobs all over the court but they also showed great leadership today and kept the team up and helped the younger girls work through mistakes.”

Freshman Maddie Smetana contributed to the win with five kills, five digs, three assists and a block and senior Lauren Lappert finished the match with five kills and a pair of digs.

Chagrin Falls came up on the short end of the scoreboard but the Tigers showed some promise under first-year coach Kelly Holtz.

“Despite the loss, it was a step forward for us,” Holtz said. “We are encouraged by the team’s work to improve.”

Holtz was especially pleased with her team’s serve-receive and the development of the Tigers’ attack.

“Our setting and attackers are continuing to improve in making connections to put up an offense, but it still a work in progress with two new setters,” Holtz said.