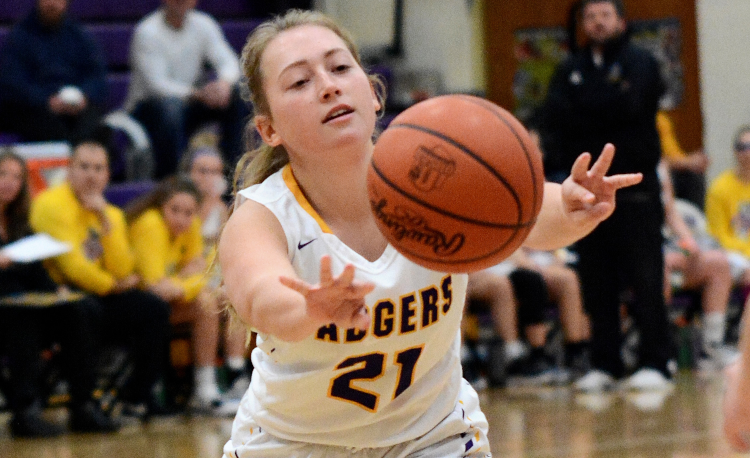 Lydia Kastor and Lexi Boyk combined to score 11 points in the fourth quarter as Berkshire pulled away from visiting Conneaut in a Division III sectional semifinal on Wednesday.

“It’s always exciting to get a chance to host a tournament game,” Berkshire coach James Bosley said. “The cheerleaders were here, we had a great student section. The game itself was exhausting to coach. Tony (Pasanen) had his girls ready to play. They play in a tough conference, but so do we. We just had to get the jitters out and play like we are capable of.”

Berkshire, the No. 6 seed in the Cortland District, got it all could handle from No. 11 Conneaut, especially in the early part of the game.

“The game was very physical and Conneaut has some very long girls that got into some passing lanes early in the game making it hard to get things running for us,” Bosley said. “We made some half time adjustments to get into things a little quicker and our defensive pressure picked up a lot in the second half. I think it was able to get to them a little bit once we started playing faster.”

Boyk led all scorers with 16 points. She scored six of Berkshire’s eight first-quarter points and drained a 3-pointer in the second quarter. She was limited to just two points in the third but finished strong with five points in the fourth.

Kastor hit a 3-pointer in each of the final three quarters and she added three free throws in the fourth.

Courtney Czekaj added three points for the Badgers and Maddy Triskett, Lanie Wadsworth and Alyssa Schafer each contributed with two.

“We all played well at times,” Bosley said. “It was late in the third quarter we really started finding open spots against their defense and once we saw the ball go through the hoop a few times it helped our overall team confidence. We were missing a couple of players due to injuries today but the next-girl-up attitude really showed up with freshmen Lanie Wadsworth getting some quality minutes tonight.”

With the win, Berkshire advanced to Saturday’s sectional final at No. 3 Kirtland.

The Hornets defeated the Badgers by double digits in both regular-season matchups. The Badgers are hoping to ride the momentum created by a four-game winning streak carries over into the third showdown.

“Kirtland is a really good team,” Bosley said. “They’re very well-coached and those girls show up to play every time they step on the court. To pull an upset, it’s something that’s not impossible. It starts with having two good practices leading up to Saturday. I expect my girls will be ready to go and I think it’s going to be an exciting game on Saturday.”