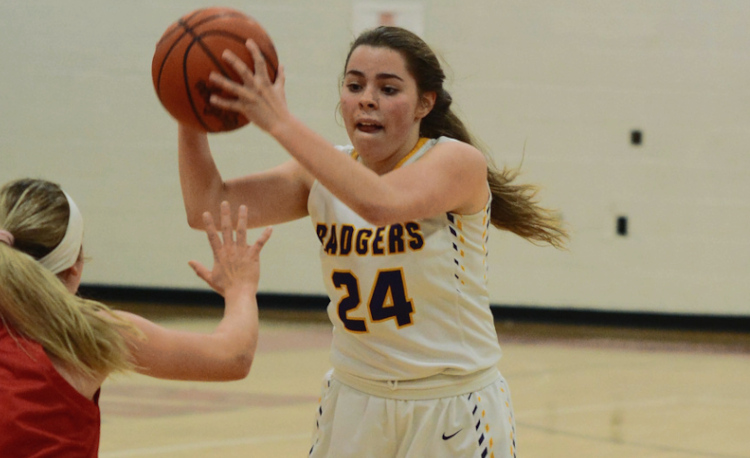 Berkshire has had some trouble finding its offensive rhythm throughout the season but that wasn’t the case on Thursday in a 49-30 win over rival Cardinal.

The Badgers outscored the visiting Huskies in the first quarter, 15-2, and led at halftime, 30-9.

“Early in the season, we have had a hard time getting started in games,” said Berkshire coach James Bosley. “Since coming back from our latest pause, we have averaged 16 points in the first quarter. Tonight was no different, having a 15-2 lead.”

Maddy Triskett scored seven of her eight points and Lanie Wadsworth added four of her eight in the opening quarter to fuel Berkshire’s early run.

Lydia Kastor took over in the second quarter as she scored seven of her team-high 12 in the frame.

The Badgers shot 13-of-18 and recorded nine assists in the first half.

“It was nice to see the girls playing so unselfishly,” Bosley said. “We slowed down a little bit in the second half shooting-wise, but we were still able to keep control of the game.”

Cardinal’s Haley Domen scored nine points in the third quarter on the way to a 14-point game but the Huskies couldn’t sustain that success and the Badgers held on for the win.

Kastor led the Badgers in scoring but she also posted a team-high five assists. Mollee Chapman contributed to the win with six points, eight rebounds and four assists.

“Mollee Chapman has been a game-changer as of late,” Bosley said. “She’s been able to grab a lot of rebounds and has been blocking or altering shot attempts and it really helps limit our opponents to only one shot attempt during their possessions.”

“(She) has really embraced the role of point guard,” Bosley said. “She has such good court vision and isn’t afraid to make passes in traffic. She has an old school, pass first point guard mindset and has done a great job setting her teammates up.”

With the win, the Badgers improved to 6-6 overall and 4-1 in the Chagrin Valley Conference Valley Division. Cardinal dropped to 6-11, 4-5.