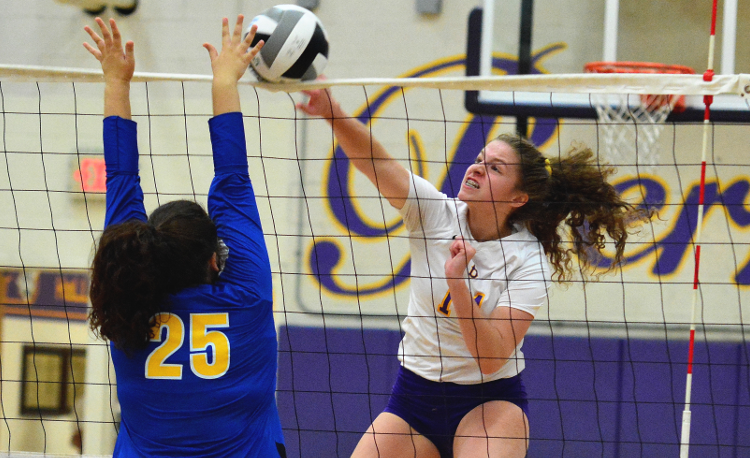 Walz hammered home ball after ball and she scored nine straight service points in the first set to help the Hurricanes overcome a 19-15 deficit to win, 25-21. Berkshire adjusted its defense—and intensity—and went on to win the next three sets and the match, 25-20, 25-21, 25-21.

“She definitely is a great player, probably the best overall player we’ve seen all year,” Berkshire coach Joni Prots said of Walz, who will continue her education and playing career at Bowling Green State University. “It took us a little while to execute our game plan in terms of where to attack and what we needed to do defensive-wise.”

That game plan included finding a way to slow down Walz instead of trying to stop her.

“I told them at the beginning, we’re not going to shut her down,” Prots said. “She’s going to get her points, we just have to make sure we don’t score points for them and take care of anyone else who touches the ball. In game one, we scored a whole bunch of points for them, which has been our downfall a lot this year. That’s the thing we’re working on. They were a little better in games two and three and had a little stretch in game four. I keep telling them we’re getting there but now it’s time to get there.”

She finished the night with 15 kills, 12 assists, four digs and seven service points but it was her own adjustments at the net that made the difference.

Three times she hit the ball right at Walz, who blocked each hit attempt. On the fourth, Chapman tipped the ball over Walz’s fingers for a Berkshire point.

“I think that’s part of the process that they’re going through,” Prots said. “Some of the younger ones are figuring out their roles and they’re figuring out how to play back. It doesn’t just have to be the three that have done this before. They’re starting to work as six instead of individually.”

“Mollee definitely played well,” Prots said. “She hustled her butt off. Laney I thought did well passing. She had her kills when we needed them. Those two played really well but it takes the team and it takes Angie (Romano) getting a couple of touches in the back when we needed them and keeping the ball in play. Everyone played well.”

Berkshire improved to 4-7 overall while Brooklyn dropped to 8-3. The Badgers travel to Valley Division rival Wickliffe on Thursday while the Hurricanes host Trinity in a clash of Metro Division teams.