Skippers come up short in setback to Mentor Christian 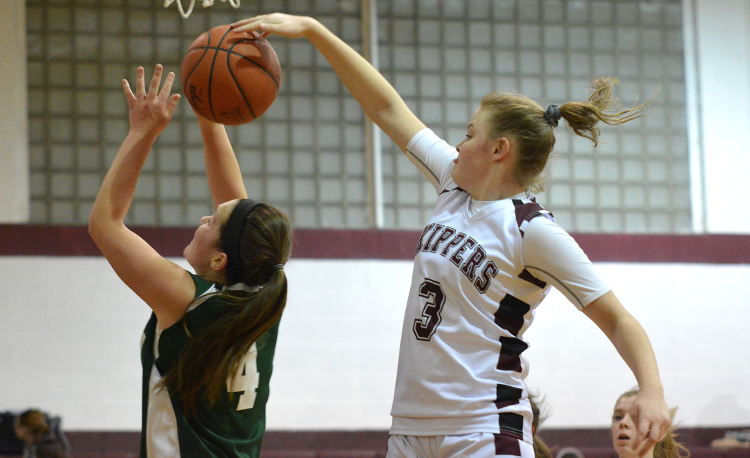 FAIRPORT HARBOR—Mentor Christian used three third-quarter 3-pointers to pull ahead of host Fairport Harding then held off the Skippers down the stretch in a 30-29 win on Monday.

The Skippers had one last look at the basket but freshman Olivia Eldridge’s jump shot hit the back of the rim with five seconds left in the game.

“I wanted her to hit that shot too because she had been struggling a bit on offense,” Fairport coach Ed Reed said. “She does great on defense but Olivia is a competitor. They ran it perfectly just by drawing it up with freshmen girls out there and that’s fun when that happens.”

Eldridge, who recorded four blocked shots in the first half, finished with three points. She made a great play to break free on the inbounds pass but was a bit long on her game-winning shot attempt.

“Olivia plays 32 minutes; she doesn’t come off the floor,” Reed said. “I know she’s tired as a freshman and she probably had a little bit of anxiety. She knew what she needed to do and I know she’d love to have that one back.”

Isabelle Venman hit three 3s in the third quarter to help the Crusaders build a four-point lead but the Skippers rallied back.

The Skippers then recorded a steal as Mentor Christian brought the ball up the court but couldn’t convert on the offensive end.

“This was by far Paige’s best game all year long,” Reed said. “Paige has struggled a little bit but she didn’t come off the floor either except for a couple of minutes. She knows how to penetrate and kick.”

Urban was clutch for the Skippers in the final minutes of the fourth quarter as she scored six of her seven down the stretch.

“I told Nora to get on the block because they’re coming so far out and I told the other girls to keep their heads up because Nora is open,” Reed said. “You get her the ball and she’s going to hit that little bank shot.”

The Skippers close out the regular season with a game at Cardinal on Wednesday and a home contest against Independence on Thursday.

“I told the girls not to put their heads down,” Reed said. “This was a great game for them.”