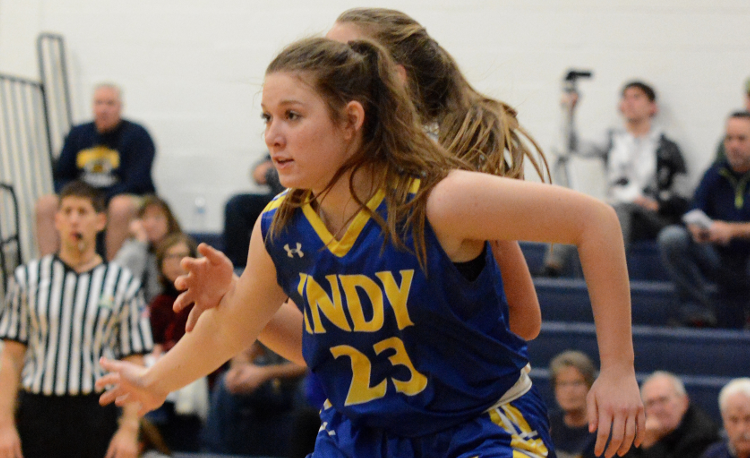 A schedule change took the Independence girls’ basketball team out of its normal game day routine but that didn’t stop the Blue Devils from beating host Richmond Heights on Saturday, 73-48.

Instead of starting at 2:00 p.m., tip-off was rescheduled for 11:00 a.m. With the win, the Blue Devils improved to 11-2 overall and 7-0 in the Chagrin Valley Conference Valley Divison.

“It was hard for the girls because of the game time shift due to the impending blizzard,” Independence coach Mike Marcinko said. “We had a whole plethora of excuses not to play well and we did a pretty good job of fending that off and not being complacent. We got ourselves focused and got things done on the road. We got a lot of different people a lot of playing time and worked on people in different positions to learn different positions.”

Madison Stepanik led the Blue Devils with a team-high 14 points.

She scored most of her points off of her aggressiveness on the offensive glass.

“Getting big and holding my position in the post I think was definitely key for me to get to the hoop,” Stepanik said. “Richmond’s post was strong and aggressive, so I knew I would have to work extra hard to post up, work around her, and score.”

Stepanik also played a key role on defense by altering shots in the paint and even created several of her own scoring opportunities with steals and easy breakaway layups.

“Going into the game, I knew the post was a solid athlete and strong in the paint, along with driving to the rim, so I knew my job on defense was to be aggressive and make it difficult for anyone to get in the paint and score,” she said. “I think overall everyone had a solid game and locked down well on defense when it came to stopping the drives and being aggressive.”

Amy Ksiazka, Kaitlin Richards and Haylee Dmitruk each contributed with six points and Anna Weber pitched in with five.

“We spread it around and were able to get a lot of different combinations on the floor,” Marcinko said. “It was a nice road win even for the circumstances for the day.”

Dmitruk led the Blue Devils with eight assists. Five of those came in the first quarter.

“They played a lot of zone and she did a lot of breaking it down and kicking it out for 3s and dumping to the bigs,” Marcinko said. “For her, it wasn’t as big of a scoring night as her last couple but she was distributing and getting it to people and making good reads.”

Larissa Williams led the Spartans with 16 points and Tamia Farris pitched in with 15. Imani Hendon added a couple of 3-pointers as she finished with nine points.