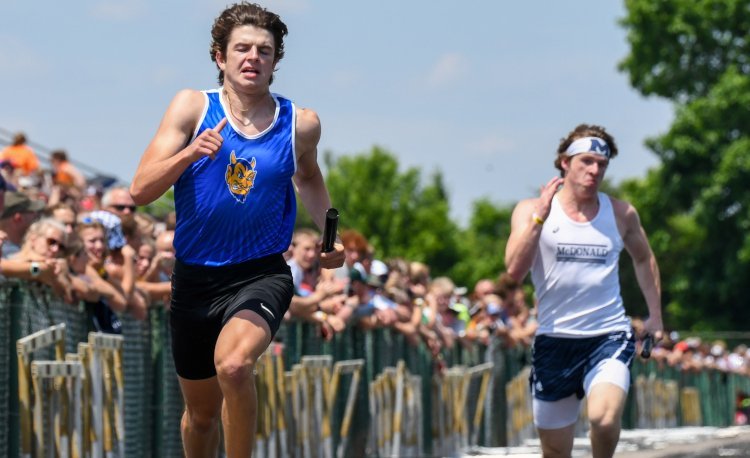 Last spring, Independence’s track teams won conference and district titles, and the Blue Devils hope to serve up an encore performance this spring.

The Blue Devils return four All-Ohioans and a host of others with regional meet experience.

“We feel that this year’s team will be competitive with our returning seniors and with our returning sophomores and juniors, who have all gotten stronger,” said Independence coach Jess Crooks. “Our freshmen are learning a lot from the upperclassmen.”

Crooks and her athletes have high expectations for this season and they all know they’ll have to perform at a high level in each meet to reach their goals.

“We are looking to be competitive this coming season, and with strong teams in the conference, we have to really bring our best effort as individuals and as a team,” she said. “That said, we have some great runners and competitors, and this season should be fun.”

“He has two speeds: full throttle and sleep,” Crooks said of Stralka.

Seniors Jack Taliaferro and Kyle Zygmunt teamed up with Stralka in the 4×200 and Zygmunt also placed sixth at state in the 400-meter dash. Zygmunt will compete in the high jump as well.

Taliaferro will team up with junior Mike Andryszczyk, sophomore Landon Jatsek, and freshman Sam Eisenmann in the 4×400-meter relay.

Senior Lucas Martinez will jump into the 4×100 and 4×200 relay teams with his classmates. He’ll also compete in the pole vault.

“It’s going to be fun to watch these athletes perform,” Crooks said. “(Taliaferro) will run through a brick wall for his team. (Martinez) is our go-to utility athlete. (Zygmunt) is a team leader. He is very versatile and is ready to compete this year.”

Independence’s other returning All-Ohioan is sophomore Casey Adams, who placed eighth at state in the long jump as a freshman. She’ll once again compete in the long jump, high jump, and the 4×100 and 4×200-meter relays. She’ll team up with seniors Alex Adams, Skylar Leichliter, and Ava Moreal in the 4×200.

Alex Adams placed ninth in the 100-meter dash at the regional meet. Moreal also runs the 400.

Senior Gabby McGreevy was part of the 4×800-meter relay team that won the conference title and placed third at the district meet. She’ll compete again in the 4×800 as well as the 1600.

“I’m looking to her as a leader of the distance team this year,” Crooks said.

Senior Sonia Sajovie and sophomores Alana Nowak and Katie Coljohn will join McGreevy in the 4×800.

Coljohn will team up with Ava Moreal, senior Alberta Moreal, and junior Grace Taliaferro in the 4×400-meter relay and also will compete in the 800.

Junior Jess Harb earned first-team all-conference honors in the discus and junior Kaitlyn Grill was an honorable mention selection in the shot put.

“Jess peaked at the right time last year. I’m looking to her to be the future of girls’ discus,” Crooks said. “Huge growth from Kaitlyn this year in indoor track. I can’t wait to see her throw outdoors.”

Nowak will run the 3200 for the Blue Devils.

“She is one of the hardest workers we have,” Crooks said. “I can’t wait to see her growth this year.”

Senior Morgan Crist will compete in the discus, shot put, and 110 and 300-meter hurdles.

“Morgan had a rough season battling a major injury last year,” Crooks said. “Our goal is to keep him healthy and ready to compete so he can contribute.”

Senior Deston Boscarellie is locked in for the long jump and junior Kyle McGovern, sophomore J.P. Musni, and freshmen Jack Ottaviano and James Kitagawa will run the boys’ 4×800-meter relay.

“Our strengths this year include the fact that we have 15 returning seniors, who have experience and who are looking forward to competing at a high level,” Crooks said.