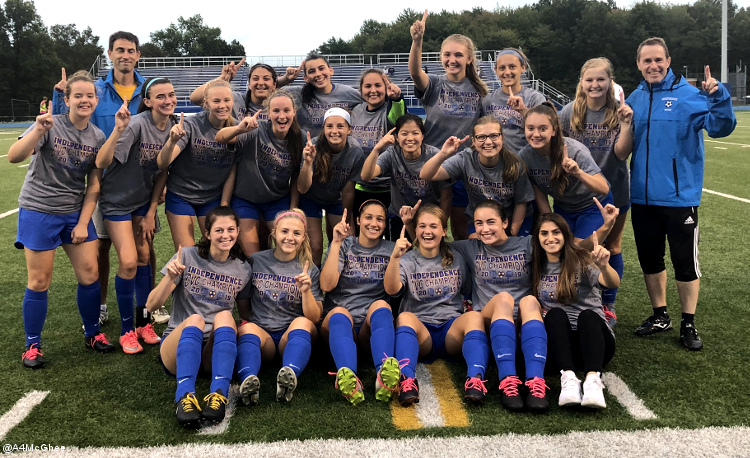 As one youngster put it, Independence is now known as Windependence.

“It has been a great week for Independence sports with volleyball, boys soccer and girls soccer all winning CVC titles,” Independence athletic director Annie McGhee said. “Our student-athletes continue to impress by making school history by already capturing four conference titles in the fall season–girls golf also won this year–and the football conference schedule is just getting started. This all starts with our supportive parents and fans who get behind all of our teams.”

Senior Molly Dougherty scored two goals and Riccela DiGeronimo, Hannah MacRaild and Paige Westerburg each found the back of the net once to lead the Blue Devils to their first conference title.

“Winning the title as a senior is so exciting for me because it’s something that me and the whole team have worked so hard for,” said Dougherty, who is a four-year varsity player. “I think what made this year different was that our team had definitely clicked and I think it is because we found a new alignment that really lets us use our ability to the best we can. I also think that the team had worked especially hard during the off-season to make this a great year. All these factors were key to our success. We were so close last year and we wanted to make it up this year.”

Westerburg, DiGeronimo, MacRaild and Alex Adams each recorded an assist in the win and Maria Bellito recorded two saves in notching her first career shutout in goal.

“We played a very strong, consistent game in our final CVC match,” Independence coach Bryan Less said. “With the last week’s scores, we all knew that we already had the conference won, so I told them this was their coronation. We had to play well and look good since everyone would be there to see us.”

Independence’s volleyball team improved to 15-2 overall and 9-0 in league play with its sweep of Brooklyn. The Blue Devils have won all 27 sets they have played against league rivals and all 36 against CVC teams as a whole as they have played three non-conference games against other league schools.

“It’s really exciting clinching the conference title,” senior captain Kalli Screptock said. “We, as a team, have been working so hard in the gym to achieve our goals. We are all looking forward to what’s in store for us. We have been having a bit of a rough patch with our energy, but we know what we have to do and have been putting our pieces back together day by day. We always play with a lot of humility and will continue to do so to make sure we go far without getting ahead of ourselves.”

Independence’s boys’ team locked up its league title on Tuesday and finished league play 6-0. Now, the Blue Devils hope to finish the regular season strong and they got off to a great start with a 6-0 win over Streetsboro.

Adam Liebal and Elek McDonald each scored two goals while Brandon Patton and Emmett Stralka each scored one. Danny Mewhinney, Christian Streibel, Liebal, McDonald and Patton all assisted on goals.

“That was a nice non-anything tune-up game before we get into the playoffs against a scrappy Streetsboro team,” Independence coach Ryan MacRaild said. “The boys worked hard and were very connected through all lines of the field. We had to work hard on our finishing because their starting keeper made some great saves, but eventually found the back of the net.”