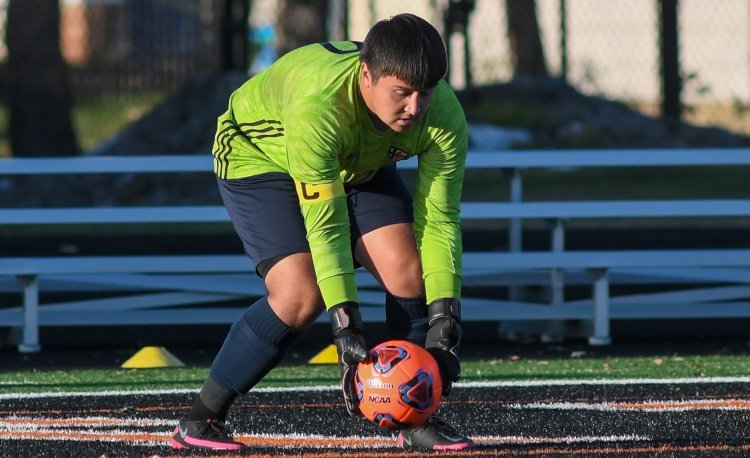 Despite graduating 11 seniors from last season’s squad, the Harvey Red Raiders have their sights set on a Chagrin Valley Conference Chagrin Division title this fall.

The Red Raiders, who were 16-4 overall and 3-2 in league play last fall, do return six key starters and have several others ready to step into starting roles.

“Heading into 2022, we are excited to see what this team is capable of over the course of the season,” said fifth-year head coach Natalie Sisler. “We are looking to see growth from the beginning of the season to the playoffs. As a staff, we feel that we have a very talented roster that just needs to build chemistry and settle into their roles. We are returning two captains in goalkeeper Adan Torres and defender Jonathan Orozco, who push their teammates each day to improve and stay focused. This team definitely will be looking to compete and win the CVC title; that is our team’s top goal going into this upcoming season.”

The Red Raiders defeated Austintown Fitch, 1-0, and Kenston, 4-3, before falling to University School in a district semifinal, 1-0.

To achieve their goals, Harvey needs somebody to step up and pick up where those two dynamic players left off.

“(Julio’s) absence will be felt early on as young talented players look to step up and fill the role,” Sisler said. “We will miss (Edgar’s) skill and toughness. Fortunately, we have some very talented players competing to fill those positions.”

On offense, junior Kevin Fonseca already has emerged as one player capable of handling the load offensively.

He scored two goals in Harvey’s 2-0 season-opening win at North and now has three already this season. Fonseca finished his sophomore year with 10 goals and three assists.

“Kevin is one of our most talented players,” Sisler said. “He can be electric with the ball at his feet. He has the ability to create in the attack and is always a threat to score the ball from anywhere on the pitch. Kevin will definitely be in contention for some postseason awards if continues to develop.”

Junior Byron Perez arrived at Harvey from Costa Rica and also will contribute to the potent attack ad junior midfielder Elian Bustos is off to a fast start with three goals in as many games after scoring three with five assists last season.

“Byron could possibly be one of the most gifted midfielders in the area,” Sisler said. “Elian has some serious potential as an attacking midfielder. He just needs to work on his consistency and confidence as he plays more minutes this season. He will be a key contributor to our midfield rotation.”

Senior midfielder Brandon Torres can do it all for the Red Raiders. The honorable mention All-Greater Cleveland selection scored three goals with two assists last season and he’ll be counted on to increase his production on both ends of the pitch.

“Brandon is one of the top defensive midfielders in the area,” Sisler said. “He can also be lethal when he goes forward in the attack. He has one of the quickest first touches on the ball which makes him difficult to defend. Brandon could really be in for a breakout senior campaign.”

Senior forward Josue Rodriguez Cisneros and junior midfielder Alexis Orozco both are key returners for the Red Raiders this season.

Rodriguez Cisneros scored three goals with three assists last season while Orozco pitched in with six goals and one assist.

“Josue is a great athlete. He can really step up as a senior and finish his career strong; he has always shown great potential. We are expecting that potential to turn into some real production this season as Josue will play both out wide and give us minutes at forward. Josue is hyper-competitive and will fight to win every ball that comes his way,” Sisler said. “Alexis is moving from right mid to left mid this season and will be another weapon in our attack. He has great skill and quickness on the ball. He has shown the most growth of any player this offseason.”

The strength of Harvey’s defense rests with Adan Torres, a human wall in front of the net.

“Adan is an elite goalkeeper who can make big saves as well as distribute the ball,” Sisler said. “His leadership is exquisite. He competes at an All-Ohio level and really creates opportunities for us with his distribution from the back. He is the voice in the back that really organizes our team.”

Despite losing two starters and three defensive substitutes to graduation, the Red Raiders have plenty of experience and talent returning.

Juniors Jonny Orozco and Mason Haffa and sophomore Alex Munoz all are poised to have breakout campaigns.

“Jonny’s season last year was riddled with injuries and did not allow him to play in many games or really get into form. He will look to have a bounce-back season this year. Jonny is the keystone of our defense. He is our leader on defense and can play at defensive mid if needed. Really, the sky’s the limit for Jonny as he is still just scratching the surface of his ability and talent,” Sisler said. “Mason played every position on the field for last season including goalkeeper one game against Chardon. Mason’s athleticism and intelligence make him extremely versatile. We will look to use Mason in different ways this season to help our squad be as strong as possible. Alex was our top freshman last season and transitioned to defender for the first time in his career. He made great strides in his development over the course of the season and offseason. He gained valuable experience playing in the district semifinal last season against University. We are hoping he can help lead our backline for the next few seasons.”

The development of the Harvey program began several seasons ago with some talented players elevating the play of their teammates, and now, the Red Raiders aren’t rebuilding, they’re reloading.

This year’s squad is deep and talented and has a strong mix of upperclassmen to help the younger players settle into their roles.

“This year’s team has a strong core of senior, junior, and sophomore leaders who are both very talented and of great character,” Sisler said. “Our two captains at the start of the season are senior defender Jonathan Orozco and senior goalkeeper Adan Torres, both could play at the next level. Coming off our best season in program history, this team may be just as talented potentially if players develop the way we expect them to.”

“This year, one of our greatest strengths is that we have a lot of depth in multiple positions,” she said. “Defensively, this may be our strongest unit we have ever seen as a collection of talent. We have a deep group of guys who can come in and play at a high level. This year we will be able to make substitutions while maintaining a higher level of play. Additionally, this depth will help us when it comes to injuries and other events that may see a player become unavailable. We look to use a rotation to keep players fit and engaged throughout the course of the season.”

Despite her optimism, Sisler knows games are won on the pitch and not on paper.

For the Red Raiders to achieve their goals, they’re going to have to work together in all aspects to reach their potential.

“Our success this season will have a lot to do on the development of our defensive unit,” Sisler said. “Our defense has been a major strength of our team the past two seasons with an 0.85 goals allowed average and 10 clean sheets last season. As long as players can commit to the process and work to improve and grow, I think we will be very successful. Furthermore, players cannot get too high or low from results early on in the season as they develop as a unit. Fortunately, they will have first-team CVC goalkeeper and captain senior Adan Torres back there to help them out as they develop over the course of the season.”