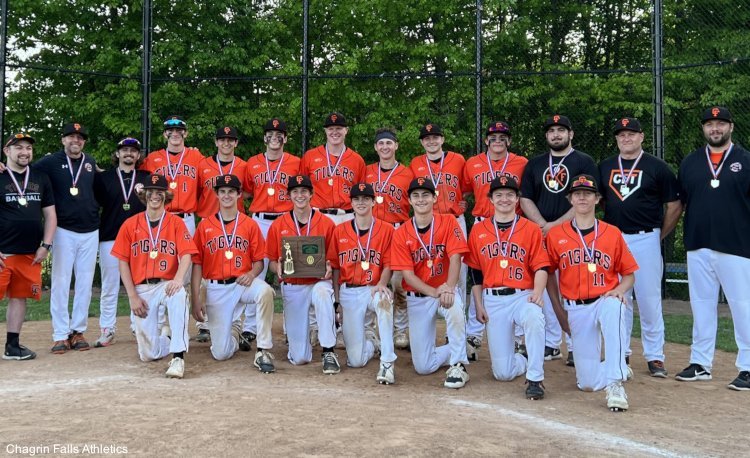 The Tigers came from behind to defeat Cloverleaf, 6-4, in the Division II Copley District championship game.

“It’s pretty cool,” said Chagrin Falls coach Michael Sweeney. “We have some players back from last year but this was a pretty new identity for our team. Last year’s top pitchers are gone so we had different guys there and we had a lot of different guys step up, and it’s been like that all year.”

An error followed by two singles and a double allowed Cloverleaf to score two runs in the top of the first inning.

The Tigers responded with two of their own in the bottom half of the inning.

Donny Hardy and Leo Fornara both reached on errors, Nick Calabrese drew a walk, and Gavin Stevens hit an RBI single to tie the game.

“We talked about how we thought it was important if we could shut them down and get on them early because they had won like nine in a row and 13 out of 15, so they were riding a hot streak and we thought if we could get on them early it might make them a little nervous because we have more experience being in the district, but that didn’t happen,” Sweeney said. “I told them the good news is we’re also used to being down a little bit this year. You don’t always win games easily but it was big to get right back at them and tie it up even though they helped us a little bit with a couple of errors.”

The Tigers struck for four runs in the fourth inning.

Drew Mergenhagen led off with a single and Calvin Hill walked. Hardy singled to load the bases with no outs, and then Brett Vaccaro reached on a fielder’s choice when Cloverleaf threw out the lead runner at the plate.

“We started with the bottom of our order and then our leadoff hitter, Donnie Hardy, got a single, and we went on to load the bases,” Sweeney said. “Leo Fornara and Andrew Fornara had big hits for us and in a game like this, that’s huge. That got the momentum going.”

The Colts scored a run on two hits in the fifth but the Tigers turned a double play to limit the damage. Cloverleaf added a run in the sixth and brought the tying run to the plate in the seventh but back-to-back strikeouts and a groundout ended the game.

Kirkpatrick earned the win after allowing one earned run on seven hits and striking out three. Stevens earned a save. He allowed one hit and struck out two in one inning of work.

“It’s nice to have a senior, four-year player, like Andrew out there,” Sweeney said. “He’s played a ton of baseball and he just doesn’t get rattled. He goes out and does his thing.”

Stevens and Mergenhagen both finished the game with two hits for the Tigers, who improved to 18-11 on the year.

Chagrin Falls will play Chardon in a regional semifinal at Thurman Munson Memorial Stadium in Canton on Thursday, June 2.

The Tigers and Hilltoppers split a two-game non-conference series earlier this month.

“We kind of know each other a little bit,” Sweeney said. “Neither of us saw the other’s No. 1 (pitcher) for more than an inning or so. We’re familiar with their hitters and how they play, and they can hit it. They can flat-out hit. It will be an interesting game.”