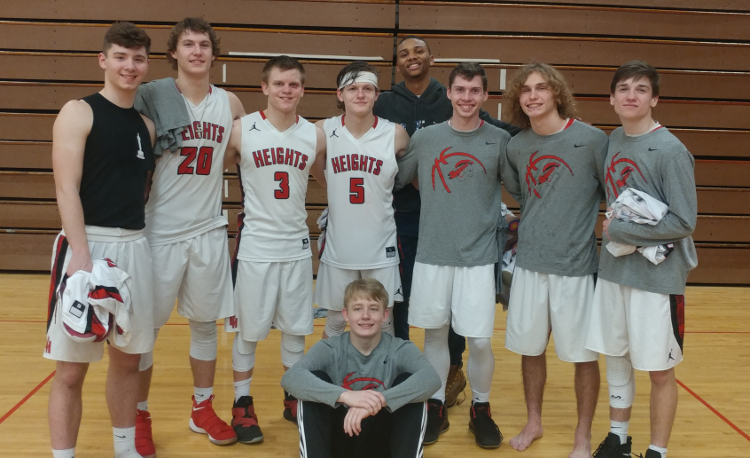 Nearly every high school basketball team in Ohio has been hard at work over the past work. Meanwhile, at Cuyahoga Heights, the Redskins continue to practice with a small crew thanks to the continued success of its football team.

Cuyahoga Heights will play for a regional championship on Friday and if all goes well basketball coach Michael Tartara won’t see several key members of his squad for another couple of weeks.

“So far, it is hard to gauge our team and its expectations due to the football team continuing their run in the state playoffs,” said Tartara, who is 157-140 in his 14 years at the school. “Seven varsity hoopers are important contributors to the football team and we wish them continued success these next few weeks. We will have 11 seniors on our varsity roster and many players got valuable experience at the varsity level as juniors last season, so we are hoping that helps to speed up the learning curve as the players transition from football to basketball early in the season. We hope to be competitive throughout the course of the season and playing our best basketball by the end of the year to compete in our tough district with teams like Richmond Heights, Mogadore, and Dalton.”

The Redskins finished last season with a 14-8 record and a disappointing upset in a Division IV sectional semifinal.

With as many as four returning starters, Cuyahoga Heights has an opportunity to atone for that early exit.

“One of the encouraging things for our program is that we have record numbers that have come out for basketball in grades 7-12,” Tartara said. “Hopefully, this will breed competition within as players continue to develop and strive to reach their full potential.”

The good news for Tartara when he finally has his full roster at his disposal is the fact he won’t have to coach up the kids in regards to their intensity.

The Redskins are a competitive bunch and hope to build off last season’s success behind the 3-point line.

“With many of our key players being contributors on the successful football team, our kids are generally very competitive when they step between the lines,” he said. “The athleticism from several of these players will hopefully allow us to play multiple styles of offense and defense depending on the game. On the offensive end of the floor, we shot and made the most 3s ever in program history last year. Many kids spent the previous offseason and this fall shooting a lot and much of that can be attributed to assistant coach Randy Streicher, who has dedicated significant time and effort organizing morning shooting for the kids before school.”

Tartara’s only preseason hurdle hasn’t been putting together a practice plan missing so many key players, he also has to deal with the graduation loss of standout Nassiem Salem, the reigning Chagrin Valley Conference Player of the Year.

“Another big challenge for us will be dealing with the loss of Nassiem Salem to graduation as he is now playing at Hiram College,” Tartara said. “Last year’s CVC Co-MVP did it all for us and while it is impossible to replace someone like him, it will require multiple players to step up to try and fill his shoes.”

“Ryan returns to the team as the most tenured varsity player having two years of quality varsity experience,” Tartara said. “We will be asking Ryan to do a lot this season both on and off the floor. He worked hard throughout the summer on his ball-handling and shooting and is poised to have a great senior year.”

It will take some time for Tartara to complete his starting lineup but he isn’t short on options.

“Sam brings a lot of athleticism and leadership to the team,” Tartara said. “We hope to see him kick the football rust off quick after he leads the football team on another state championship run. We would like him to rebound the basketball consistently and shoot it when he’s open.”

Polack, a 5-foot-10 guard, also is a returning starter. He averaged 4.4 points, 2.4 rebounds and 1.8 assists and converted on 23 3-point tries. He earned honorable mention all-CVC and all-district.

“Kyle is a key ‘3 and D’ player for our program,” Tartara said. “Kyle often takes the responsibility of guarding the other team’s best player and relishes the opportunity to get after it on the defensive end of the floor. He loves to compete.”

Davis averaged 4.6 points and 3.5 rebounds per game while Bartosik dropped in 4.1 points with 3.6 rebounds per contest.

“Curtis has made tremendous strides in our program since he came to Cuyahoga Heights in middle school. He showed the potential to take his defender off the dribble last year and continues to refine his post-game as he gets stronger and grows into his long, athletic frame. This preseason he has already shown growth inside on both ends of the floor and will need to be a presence on the boards consistently. He also likes to shoot half-court shots. Be aware if we are down three with two seconds left,” Tartara said. “Jason has good size and great length for someone at our level. He has matured quite a bit as a basketball player and a student-athlete these past few years and we are looking forward to seeing the positive impact he will have for our team on both the offensive and defensive ends of the floor. He is a natural athlete that always needs to be accounted for.”

Knaack, a 5-foot-11 forward, and Rose, a 6-foot forward, provide the Redskins with even more depth and size.

“Austin Knaack is a hard worker and is extremely coachable. He jumps extremely well as an undersized post and is very quick to get up and down the floor as he was a state qualifier in track last year in the 200-meter dash. Last year at the JV level, he began to expand his solid mid-range jump shot out to the arc so we are hoping that will translate to the next level of play,” Tartara said. “Rosie is the kid with crazy hair that seems to know how to get things done on the floor. He’s always smiling and is a calming presence for us both on and off the floor.”

“Bryan will assume some of the ball-handling role that was lost due to the graduation of Nassiem. He has the ability to stretch the D with his outside shot and understands the game within the game better than most high school players. Bryan has natural basketball talent,” Tartara said. “Jordan is a scrappy defender and has the ability to knock down the open 3. Charlie is a great kid who knows the game well. He has the ability to be a tenacious defender to potentially give Polack a breather on specific defensive assignments. Although he is currently battling a nagging injury, Charlie is consistently giving 110-percent every day for the betterment of the team and the program. Tyler has been in the program since middle school. He continues to work hard at basketball and improve his game. Although he will see limited time, his spirit and commitment to the program is important to us. Devon has put a significant amount of time into his game this past offseason and has become one of the best shooters in the program. He has earned this opportunity through all of his hard work.”

With a boatload of talent on the roster, Tartara foresees a slight change in how the Redskins approach each game this season.

“While we have traditionally have been a controlled tempo team, with some of the athletes from the football program we may look to push the pace a little more than usual,” he said. “On defense, we are hoping to use the length of guys like Bartosik, Shafer, and Davis to give teams different looks at different times.”

Tartara hopes that adjustment could lead to more success in the challenging CVC Metro Division and beyond.

“As always, one of our goals is to compete for a conference championship in the CVC,” he said. “We understand the magnitude of this challenge, however, as Richmond Heights returns many players from their state final four team who went undefeated in CVC play. We did have them on the ropes at the end of last season which showed our growth and we hope to grow as a team in a similar manner throughout this season both on and off the court.”

The early postseason exit also has inspired the Redskins to push harder this winter.

“This group of seniors would like nothing more than to get back to the district level of competition at Norton and see how long they can extend their high school basketball careers,” Tartara said.