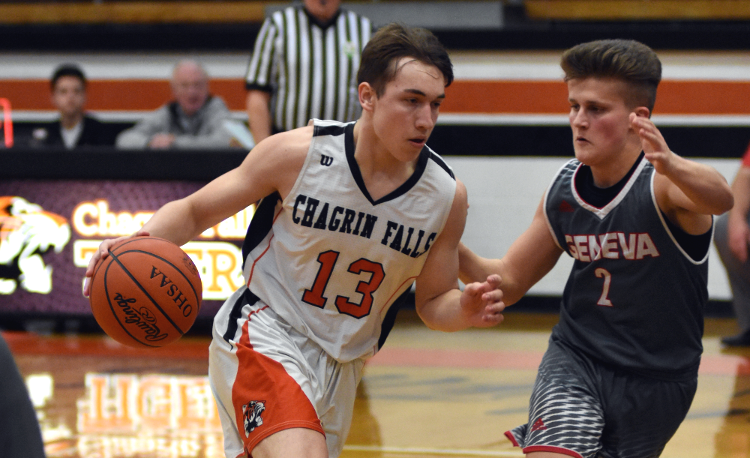 Chagrin Falls returns just two starters from last season but have several other returning varsity players leaving the Tigers with a solid core to compete in the challenging Chagrin Valley Conference Chagrin Division, but they’ll have some growing to do in order to reach their goals.

“We feel like we have the chance to be a very good team,” said Dave Bargar, who is 191-126 in his 15th year as the Chagrin Falls head coach. “How soon we develop into that team will depend on how quickly we can learn the things that will make us successful. We have a few players that gained valuable experience last season, but we have several players that we are counting on that haven’t stepped on to a varsity court yet. The quicker everyone can adjust to the varsity game, the better off we will be. We have a lot of work ahead in order to get to the level fundamentally that we need to be successful.”

While the Tigers eye a CVC title, they have bigger goals as well and a rugged schedule will test them early and often.

The Tigers are about as balanced as a team can be.

They have speed on defense and good chemistry on the offensive end. With athleticism throughout the lineup, they’ll be able to play in transition as well.

Perez averaged 8.3 points and 2.6 steals per game last winter while North dropped 6.6 points and pulled down 4.2 points per contest in being named honorable mention All-CVC.

“Xavier is a dynamic player with good quickness and athleticism. He competes hard on both ends of the floor. Offensively, Xavier is very good in the open court, can get to the basket and has the ability to shoot the 3-pointer. Xavier really came on strong toward the end of last season in his first year as a varsity starter and continued with a terrific summer. We are expecting big things out of Xavier over the next two years,” Bargar said. “Josh does so many things well for us and will be an integral part of our team this year. He is one of our leaders and plays with an energy that has an impact on everyone around him. Josh has a great understanding of how to play the game, in addition to his skill set. Josh works hard defensively, is very good with the ball, has a good mid-range game and can finish at the rim. We think that Josh will have a big season for us.”

Senior Cam Owen and juniors Tate Yonker and Jack McMullen are projected to start as well.

“Cam started several games for us last year as a junior. He is a very solid and fundamentally sound player that competes with tremendous energy and does a fantastic job on the defensive end of the floor. He handles the ball well, is a very good finisher and does a great job rebounding for a guard. We look for Cam to be a leader and have a big impact on our team this season,” Bargar said. “Tate has worked extremely hard the past few years and the results are really showing. He is very solid fundamentally and has the ability to score in a variety of ways. Tate has a good mid-range game, can make a 3-pointer and is very good at finishing at the rim with either hand. I think Tate has a chance to surprise some people in our league and will play a big part in our team this year. Jack got a little varsity experience for us last year and provides our team with some toughness and physicality inside. He is very strong and athletic around the basket and gives our team a much-needed rebounding presence. Jack runs the floor very well, can score around the rim and is very smart. Jack will play a very important role for us this year.”

“Evan is a high-energy player that had a great summer and fall for us. He has made tremendous strides and will have a big impact on our team this year, playing both guard positions. Evan does a great job on the defensive end of the floor, as he is one of our best defenders. Offensively, Evan has a very good mid-range game, as well as the ability to make a 3-pointer,” Coach Bargar said. “Kyle is a strong and physical player that defends and rebounds extremely well. He has the ability to score around the rim, in addition to being a threat from the 3-point line. Kyle is very fundamental and smart when he plays. He is someone that knows his role and does not make many mistakes on the court. We think he will have a big impact on our success.”

“Burke is probably our best 3-point shooter in our program. He is a pure shooter that can get hot. Burke works hard and is solid defensively,” Bargar said. “Jacob is a great kid that will do anything to help the team. He is a very smart player and has the ability to make a 3.”

“Jack has done a very nice job so far in the preseason and gives us some depth in the front-court. He does a good job getting out in transition and running the floor and is very active on defense. Offensively, Jack has a soft touch around the basket and he has been showing the ability to step out and make a 3-pointer so far. Jack should continue to improve moving forward and impact our team in a positive way the next two seasons,” Bargar said. “Ian has shown great improvement over the past few years and has put himself in a position to really help our team. He has shown that he can be explosive in the open court with the ability to finish. Ian is a very tough defender that can guard multiple positions. We look for good things from Ian as he continues to progress.”

“Sam is a very smart and hard-working player. He makes good decisions on the court and does all of the little things that help teams win,” Bargar said. “Tyson gives us some depth inside. He has good fundamentals around the basket and is a hard worker that does a good job defensively for us.”

The Tigers have the talent and depth to be a factor in the race for the CVC title this season and they also understand the recipe for success isn’t complicated.

“In order for us to be successful on a consistent basis, we will need to defend at a high level each game,” Bargar said. “We will need to get out in transition and get easy baskets and that starts with our defense. We will need to do a good job of executing our offense and using our unselfishness to our advantage. We will also need to focus on rebounding at both ends of the floor.”