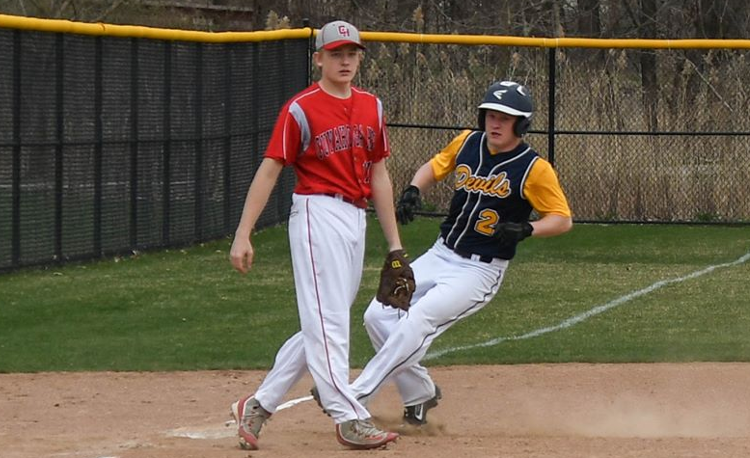 Athletes from Chagrin Falls, Cuyahoga Heights, Fairport, Geneva, Kirtland and Wickliffe have been named the Chagrin Valley Conference Players of the Week for the week ending April 14.

Name: Sam Dolan
School: Chagrin Falls
Grade: 12
Stats: Batted .500 (5-for-10) with 2 RBI, 3 runs scored and a stolen base
Coach’s Quote: “Sam has bounced back after a tough junior year with a great start to his senior year,” Chagrin Falls coach Michael Sweeney said. “He has put in the work and it is paying off. Sam is hitting the ball hard almost every time up and is hitting .381 overall with 13 RBI. What stats don’t show is how great of an outfielder he has become. He is maybe the best that I have ever coached. I also love the fact that he hustles in every situation, no matter whether he hits a ball back to the pitcher or hits the ball in the gap, he never takes a play off.”

Name: Justin Metsker
School: Wickliffe
Grade: 12
Stats: Batted .389 (7-for-18) with 6 runs scored, 2 doubles, 4 stolen bases, 2 RBI
Coach’s Quote: “Justin has been our catalyst at the top of the order,” Wickliffe coach Phil Motta said. “He plays an aggressive style of baseball. Although he has not played since his freshman year of high school at Norwayne, he has been a great addition to the team this season. Justin is also playing outfield for the first time and really has adapted well. His speed on the bases really puts pressure on the defense.”

Name: Ryan Rose
School: Cuyahoga Heights
Grade: 11
Stats: Batted .538 with 3 RBI and 4 runs scored and was 1-for-1 in runners caught stealing
Coach’s Quote: “Ryan is really starting to settle into his role on our team and his play shows that,” Cuyahoga Heights coach Jake Solomon said. “He plays multiple positions and rarely is in the same position two games in a row. He’s one of our top hitters in terms of average, but we love him batting ninth because he’s like a second leadoff hitter with the way he can handle the bat and run the bases. He’s also our top reliever.”

Name: Reese VanArnhem
School: Kirtland
Grade: 10
Stats: Batted .714 (5-for-7) with a double, 4 runs scored, 6 RBI, 2 stolen bases and 2 hit by pitch
Coach’s Quote: “Reese has gotten off to a great start to his sophomore year,” Kirtland coach Luke Smrdel said. “He has a great eye at the plate along with a high baseball IQ. Last week, he hit the cover off the ball in both games that we played.”

Name: Gianna Cantini
School: Kirtland
Grade: 9
Stats: 1-1 in the circle with 9 strikeouts; batted .778 (7-for-9) with 3 doubles, 1 grand slam and 11 RBI
Coach’s Quote: “Gianna is a rising star in the area,” Kirtland coach Jamie Kamensky said. “She is a selfless individual with a team-first mentality and has truly stepped up to help her team. She is the future of Kirtland softball. She is a take-control type kid and is really coming into her own.”

Name: Kayla Lindberg
School: Geneva
Grade: 11
Stats: In 3 games, posted a 1.11 earned run average with just 3 earned runs in 19 innings and struck out 37; batted .583 with 2 doubles, 5 stolen bases and a .643 on-base percentage
Coach’s Quote: “Kayla’s performance this week has been outstanding from both the mound and the plate,” Geneva coach Eleshia Pitcher said. “Kayla brings so much to this team with her attitude and effort. She always has a smile on her face and encourages everyone around her to be the best they can.”

Name: Tori Nahorniak
School: Fairport Harding
Grade: 12
Stats: Batted .667 (10-for-15) with 2 doubles, 1 triple, 7 RBI, 4 walks and 14 putouts
Coach’s Quote: “Tori Nahorniak, not only this past week, but all season, has been a true leader, not only on the field but also at the plate and in the dugout,” Fairport coach Ed Reed said. “Tori, as a senior has proved not only to her coaches but also to herself that she can help her team in many ways. When Tori was asked what motivated her this season, her response was Reed made me mad batting me in the ninth spot.”

Name: Hannah Levon
School: Wickliffe
Grade: 11
Stats: Batted .455 (5-for-11) with 2 doubles, 1 home run, 7 RBI and was 2-1 in the circle with 8 strikeouts
Coach’s Quote: “Hannah plays a significant role for us both offensively and defensively,” Wickliffe coach Marlana Mucciarone said. “Defensively, she starts as pitcher every game and does a nice job getting batters to hit weak grounders, pop outs and fly outs. Offensively, this week she has pounded the ball hard, driving in runs or moving runners into scoring position. She’s doing exactly what she should be doing.”

Name: Andrew Zimcosky
School: Chagrin Falls
Grade: 9
Stats: Finished the week 4-0 at first singles to remain undefeated on the year
Coach’s Quote: “Andrew as a freshman has come in and been a terrific No. 1 singles player,” Chagrin Falls coach Leslie Lozon said. “Last week, he won every match. He is a terrific tennis player and he is very respectful and easy to coach.”

Name: Austin Knaack
School: Cuyahoga Heights
Grade: 11
Stats: Won the 100-meter dash and ran a leg in the winning 4×100-meter relay and helped the 4×400-meter relay team place third as the Redskins won the George Gross Invitational; Also placed in four events to lead the Redskins to the small division championship at the Fairview Relays
Coach’s Quote: “Austin is a special athlete who strives to get better every day,” Cuyahoga Heights coach John Shafer said. “His work ethic and commitment to team is above average and his leadership has been a major key in our team’s success at this point in the season.”

Name: Cam O’Connor
School: Chagrin Falls
Grade: 10
Stats: Won the 100, 200 and 400-meter dashes at the Harvey Red Raider Invitational then won the 200 and 400 and finished second in the 100 at the Aurora Invitational
Coach’s Quote: “Cam has had an outstanding season so far,” Chagrin Falls coach Mark Iammarino said. “. As a freshman, he qualified for the regionals in 400-meter dash, but this year he’s gotten stronger and faster and his times are already very good. He’s a consistently hard worker with a very bright future.”

Name: Jenna Sayle
School: Kirtland
Grade: 12
Stats: Placed among the top three in seven different events in two different meets during the week, which included a win in the 800 at the Grand Valley Invitational and runner-up finishes in the 800 and 1600 and the Cuyahoga Heights Invitational
Coach’s Quote: “Jenna is our team leader and team MVP,” Kirtland coach JP Moran said. “She has had a tremendous career and is off to a great start to her senior campaign.”