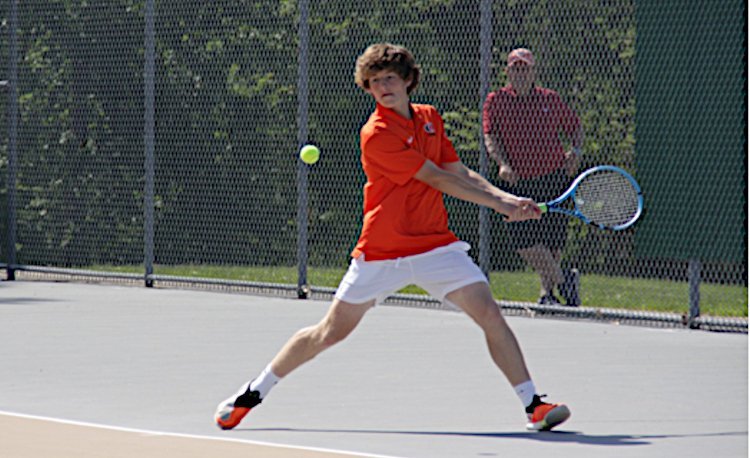 Each athlete was nominated by his or her coach. All statistics incurred from Monday, April 11, 2022 through Sunday, April 17, 2022. 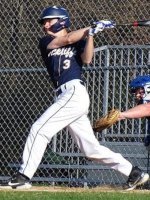 Name: Calvin Cackowski
School: Wickliffe
Grade: 12
Stats: Went 1-0 on the mound with zero runs allowed and seven strikeouts; Batted .471 (8-for-17) with two doubles, two triples, one home run, eight runs scored, four RBI, and seven stolen bases
Coach’s Quote: “Calvin is a player that leads by example and goes out and plays hard every game,” said Wickliffe coach Phil Motta. “His week was one of the best I’ve seen in a while. His home run got us back in the game against an incredibly talented University School team. Calvin continues to be our go-to guy on the mound, behind the plate, and in the middle of our order. Thiel College is getting a very good player next year.” 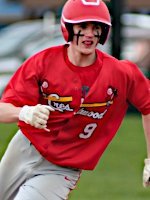 Name: Jacob Dustman
School: Crestwood
Grade: 12
Stats: Pitched 11 1/3 innings and allowed just four earned runs on seven hits with nine strikeouts and a complete game win; was 3-for-9 at the plate with two runs scored and two RBI
Coach’s Quote: “Jacob was nails on Friday,” said Crestwood coach Chris Stanley. “He was hitting his spots, mixing up his speeds, and kept the Kirtland squad off balance all game. We tabbed him as our ace and he did not disappoint. It was a gritty performance from him for a team that needed a win in a big way.” 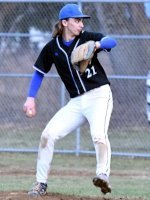 Name: Hagan Hejduk
School: Grand Valley
Grade: 12
Stats: Batted .600 (9-for-15) with three RBI, and seven stolen bases; Went 1-0 with a save in 7 1/3 innings on the mound with no earned runs allowed, five hits, 11 strikeouts, and two walks
Coach’s Quote: “Hagan is a fierce competitor and loves to have the ball when the game is on the line,” said Grand Valley coach Matt Brumit. “He has also been making solid contact in the batter’s box with great approaches each at-bat. Hagan is a vocal leader both in the dugout and out on the field. He understands every situation that may occur during a game. He is a well-rounded baseball player.” 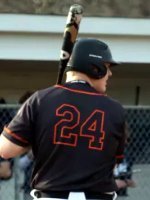 Name: Andrew Kirkpatrick
School: Chagrin Falls
Grade: 12
Stats: Batted .750 (6-for-8) with six runs scored, five RBI, and a home run
Coach’s Quote: “Andrew has started since his freshman year so we expect big things out of him,” said Chagrin Falls coach Michael Sweeney. “He started a little slow but obviously is starting to get hot as we start playing games more consistently. He has also been extremely good on the mound this season going 2-0 so far. Andrew is one of our captains and not only gets it done on the field, but he also provides great leadership for us His play last week helped us to go 3-0 on the week. Andrew will play baseball next season at Wittenberg and they will be getting a big-time player but an even better person.” 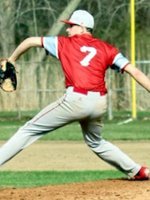 Name: Logan Kray
School: Edgewood
Grade: 10
Stats: 1-0 on the mound with one save and 15 strikeouts in 7 1/3 innings; 4-for-9 (.444) at the plate with a .556 on-base percentage, six runs scored, five RBI, and was 10-for-10 on stolen base attempts
Coach’s Quote: “Logan has been incredible this year both on the mound and at the plate,” said Edgewood coach Jeff Barger. “He hasn’t given up a run all year and was dominant in a big win for us against Berkshire where he struck out 13. He also got the save for us in our other conference game this week at Crestwood where he struck out two of three batters. He’s leading us at the plate too, hitting over .500 for the year including a .444 clip this week in our three games.” 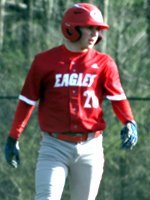 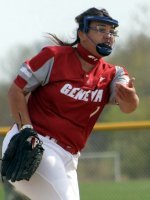 Name: Daliz Alvarez
School: Geneva
Grade: 12
Stats: Batted .556 with a .769 on-base percentage, two doubles, one triple, six stolen bases, and four RBI; Allowed four earned runs on eight hits with 14 strikeouts and an ERA of 2.00 in going 2-0 in the circle
Coach’s Quote: “Daliz is one of those players you would like to keep around forever,” said Geneva coach Eleshia Pitcher. “She not only works hard during our practice, she hangs around many days and helps the JV team. She has worked super hard in the offseason to improve her pitching and the results are showing on the field.” 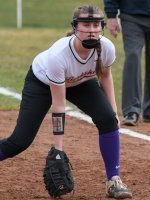 Name: Anni Bergemeier
School: Berkshire
Grade: 11
Stats: Batted 6-for-7 with three doubles, a home run, five runs scored, and four RBI; also went errorless in two games
Coach’s Quote: “Anni has had one of the most impressive starts to a season that I’ve experienced in my coaching career,” said Berkshire coach Dave List. “Almost every at-bat has been a quality one and defensively she has played a flawless first base. She is always willing to put in the extra work, so her success is not a surprise to me.” 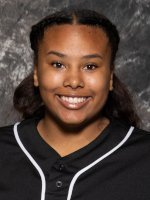 Name: Naomi Cruz
School: Lakeside
Grade: 12
Stats: Batted .428 with two doubles, two home runs, and six RBI
Coach’s Quote: “Naomi has done a great job as one of our captains in the early season,” said Lakeside coach Chad Kuchenmeister. “She has been a leader on and off the field as well as a role model for her peers. She has been great with giving the freshmen pointers on the game of high school softball. She also did everything I asked her to do with this young team. She is a big contributor to this team.” 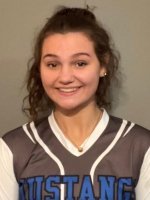 Name: Taylor Hall
School: Grand Valley
Grade: 12
Stats: Went 5-for-8 at the plate with two doubles, a home run, three RBI, and one caught stealing
Coach’s Quote: “With Taylor’s senior leadership, quality at-bats, and being a wall behind the plate, she has helped lead the Mustangs to our fast start this year,” said Grand Valley coach David Rowland. 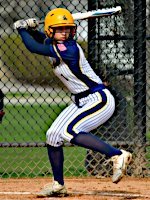 Name: Laylah Ruscin
School: Wickliffe
Grade: 11
Stats: Batted .600 (6-for-10) with a double, four runs scored, three stolen bases, and two walks in three games
Coach’s Quote: “Laylah is such an explosive and exciting player to watch,” said Wickliffe coach Marlana Mucciarone. “She is the spark in our offense. When she gets on base good things happen, which is why she makes an ideal leadoff hitter. She uses her speed to get around the bases and causes havoc for the defense.” 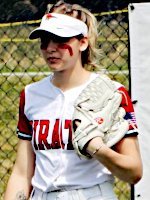 Name: Gianna Vicini
School: Perry
Grade: 12
Stats: Batted .562 (9-for-13) with two doubles, two home runs, nine runs scored, nine RBI, three stolen bases, and six putouts with one assist from center field
Coach’s Quote: “Gianna is a special player and her success comes to no surprise,” said Perry coach Joe Medlen. “GG took over the outfield this year and has been covering so much ground. She is a fearless leader who comes in ready to battle no matter the opponent and gives her teammates the confidence to be themselves. Anytime the team needs a jolt of energy it seems like it’s coming from the bat of Gianna Vicini; we have been so blessed to have her in our program these past four years and you can see how the underclassmen aspire to be just like her, not only in the way she plays but in the way she carries herself on and off the field.” 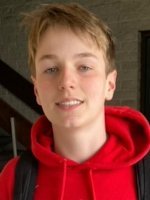 Name: Zach Forte
School: Hawken
Grade: 9
Stats: Went 2-0 with 6-0, 6-1, and 6-1, 6-1 wins
Coach’s Quote: “Zach has been a great addition to the Hawken Hawks this year,” said Hawken coach Brian Smallwood. “His poise, patience, and determination led him to victories at first singles, leading our team with a 5-0 win over both Brecksville and conference rival Chagrin Falls.” 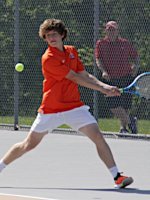 Name: Jake Goldstein
School: Orange
Grade: 12
Stats: Was 2-0 with straight-set wins in two matches
Coach’s Quote: “Orange Tennis would not be where it is today without Jake’s leadership,” said Orange coach Rich Bole. “He has worked tirelessly in the offseason to get better every year, and this year has been valuable to us on the singles and doubles court. Jake and his partner, Gabi Kalir, were the last Lions on the court when we clinched the state title last year down in Columbus and we coaches know how badly he would like to repeat that feat.” 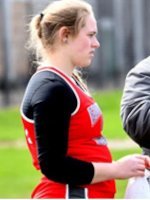 Name: Sarah Coxon
School: Edgewood
Grade: 11
Stats: Threw the shot put 35-feet, 10 ¼-inches, and the discus 104-11 in winning both events and leading the Warriors to the team title at the Perry Relays
Coach’s Quote: “Sarah came into track healing from an injury and she is quickly working herself into shape,” said Edgewood coach Steve Hill. “She has big goals this season, most of all, her first trip to the state meet.” 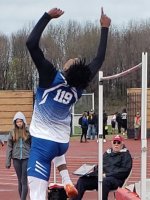 Name: Jordan Thompson-Seay
School: Trinity
Grade: 11
Stats: Cleared a school-record 6-foot-4 in the high jump
Coach’s Quote: “Jordan had been waiting for the Perry Relays for a while as he was looking forward to some good competition,” said Trinity coach Daniel Giangrande. “Jordan had a miss early in the competition and he used this as fuel to push himself forward towards a PR. By the end of the event, he finished in first place with a PR and tied the school record at 6-4.”