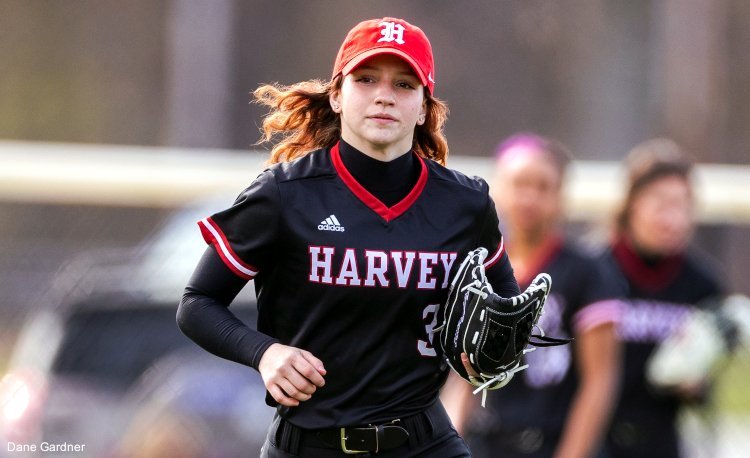 A strong defensive effort led Harvey to a 4-0 win at Hawken in a key Chagrin Valley Conference Chagrin Division game on Friday.

With the win, the Red Raiders improved to 4-0 overall and 3-0 in league play.

“We put a strong focus on our defense in the preseason and it paid dividends today,” said Harvey coach Betsy Hada. “You could see pressure was lifted off Rachael Boykin in the circle as her defense proceeded to back her up with an error-free game.”

Boykin was dominant in the circle as she allowed just four hits and struck out seven in the complete-game shutout.

That effort was needed as Hawken pitcher Anna Ricci was nearly as effective.

Ricci held the Red Raiders scoreless until the fourth inning when Alexa Bailey hit a solo home run. The Red Raiders added another run in the fifth when Diane Cortes singled and stole her way to third. Alyssia Franklin then hit an RBI single to increase Harvey’s lead to 2-0.

Josie Basco started a two-run rally in the sixth with her one-out double. Lola Thomas then reached on an error but Basco was thrown out trying to advance to third. Mira DiPierro followed with an RBI double and Boykin later hit an RBI single to close out the scoring.

Hawken threatened in the sixth but Harvey’s defense made clutch plays to keep the Hawks scoreless.

Annastasia Sideris started the inning with a deep fly ball to left but Georgia Hull was there to rob her of a potential home run. Helena Yanchar hit a two-out double and the Red Raiders intentionally walked Callia Holland. Augusta Halle then flew out to right to end the threat.

“Our team pulled out some clutch defensive plays from the get-go,” Hada said. “With two outs on the board, Hawken’s catcher tagged on a fly ball to the right-field fence and a solid relay resulted in her being tagged out at home while attempting to eke out an in-the-park home run. Kudos to our right fielder Josie Basco, second baseman Diane Cortes, third baseman Leah Miller, and catcher Lola Thomas for truly helping to set the tone for the game on that play. After that, we never looked back.”

Miller and Franklin both finished the day 2-for-3 at the plate. Bailey, Basco, Thomas, DiPierro, Cortes, and Boykin each had one hit for the Red Raiders.