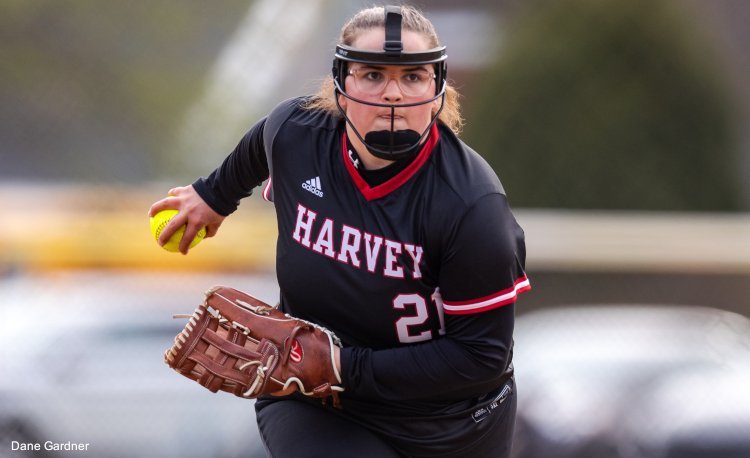 Each athlete was nominated by his or her coach. All statistics incurred from Monday, April 18, 2022 through Sunday, April 24, 2022. 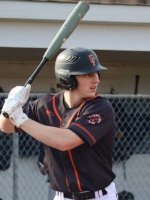 Name: Donny Hardy
School: Chagrin Falls
Grade: 11
Stats: Batted .625 (5-for-8) with two doubles, a triple, four runs scored, five stolen bases, and an RBI. He also recorded 11 putouts and an assist from center field
Coach’s Quote: “Donny is a tremendous athlete on our team,” said Chagrin Falls coach Michael Sweeney. “Donny can run, hit for power, hit for average, go get the ball in center, and can throw someone out. As you can see from last week’s stats, he did all of that in just one week. Donny hits leadoff and sets the table for everyone else. He is a big-time player and one of the best in the area.” 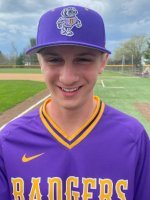 Name: Jack Jacobs
School: Berkshire
Grade: 11
Stats: Went 1-0 with 13 strikeouts in five innings; batted .636 (7-for-11) with four doubles, seven runs scored, three RBI, two walks, and four stolen bases
Coach’s Quote: “Jack is the leadoff guy of our lineup and we go as he goes,” said Berkshire coach Nick Burzanko. “He is a very disciplined hitter and can get on base a lot of different ways. Jack uses all fields and is very good at getting out of the box and stretching singles into doubles. He has great instincts on the base paths, which allows him to steal bags with good jumps off pitchers, as well as make good reads on batted balls that allow us to score runs aggressively. Jack doesn’t get to drive in a lot of runs but being the leader of our hitting lineup is a big role and he fills it well.” 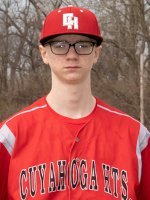 Name: Andrew McDonald
School: Cuyahoga Heights
Grade: 10
Stats: Threw a seven-inning complete game with one unearned run allowed on three hits, and nine strikeouts on 81 pitches; also drove in a run
Coach’s Quote: “Andrew played a big part in our first win of the year this past Friday against Trinity,” said Cuyahoga Heights coach Matt Streicher. “He was dominant on the mound attacking hitters from start to finish, which resulted in nine strikeouts, zero walks, and a complete-game effort requiring only 81 pitches. We are looking forward to seeing more quality starts from Andrew the rest of the season.” 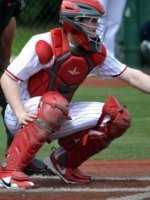 Name: Owen McKoon
School: Perry
Grade: 9
Stats: Batted .400 with two doubles, five RBI, and reached base in 50-percent of his at-bats; threw out two runners on the base paths, and had a game-tying double in a key conference game against Geneva
Coach’s Quote: “Owen has had a tremendous impact on our season defensively by slowing down runners with his arm, offensively at the plate leading the area in RBIs, and by handling the pitching staff,” said Perry coach Matt Platt. “In two games against Geneva, Owen had four hits including two doubles. He had 5 RBI in those two games including a game-tying, two-run double in the bottom of the seventh. He also threw out a runner trying to steal. Owen has made an impact in every game this season.” 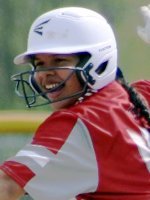 Name: Carmen Alvarez
School: Geneva
Grade: 11
Stats: Batted .400 (4-for-10) with a .727 on-base percentage, four stolen bases, one walk, and four RBI
Coach’s Quote: “Carmen is that player you always want at the plate when the game is on the line because you can always count on her to put the ball in play and drive in runs,” said Geneva coach Eleshia Pitcher. “Her mechanics in the field and at the plate are flawless. She always puts everything on the line to stop that ball at shortstop.” 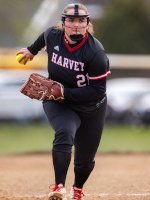 Name: Rachael Boykin
School: Harvey
Grade: 12
Stats: 2-0 in the circle with one save, a 0.00 earned run average, 12 hits, and 12 strikeouts in 15 innings, and a .200 opponents’ batting average; She also was 11-for-11 in the field and batted .583 (7-for—2) with four runs scored, four RBI, and two stolen bases
Coach’s Quote: “This week, she pitched against key conference opponents Beachwood, Chagrin Falls, and Hawken,” said Harvey coach Betsy Hada. “She was 2-0 with one save. Rachael has been key to our team’s success, not just with her actions but also as a leader of our program. She is the epitome of what a Harvey softball player should be. I am proud to have the opportunity to be her coach.” 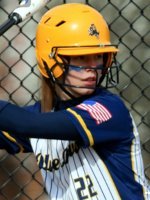 Name: Carla Sakacs
School: Wickliffe
Grade: 10
Stats: Batted .600 (9-for-15) with three doubles, one triple, four RBI, eight runs scored, two walks, and two stolen bases
Coach’s Quote: “Carla is one of the most driven and determined players for us,” said Wickliffe coach Marlana Mucciarone. “She is very coachable, which is one of those characteristics all coaches love to see. She has put in the time and hard work, and it finally paid off in the games last week as she provided us timely hits that drove in runs and put runners into scoring position. Knowing Carla’s work ethic, I am confident she will continue this trend.” 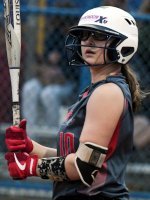 Name: Kayla Vallee
School: Cuyahoga Heights
Grade: 11
Stats: Batted .500 (6-for-12) with a 1.500 slugging percentage, one double, one triple, one home run, three RBI, and threw out three base runners
Coach’s Quote: “Kayla has been a leader on this team since she has started as a freshman,” said Cuyahoga Heights coach Kyle Manfredonia. “Her performances on both sides of the ball are why we win games and why we have a chance.” 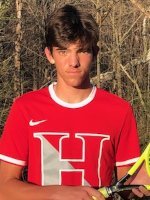 Name: Finn Rourke
School: Hawken
Grade: 12
Stats: Went 3-0 on the week with wins at first doubles, third singles, and second singles
Coach’s Quote: “Finn is a competitor and uses his skills to outlast opponents by keeping the ball in play,” said Hawken coach Brian Smallwood. “This year, it is great to see Finn using offense more and putting balls away. He is a great team leader and lends his knowledge to our young team.” 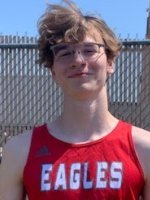 Name: Connor Boland
School: Geneva
Grade: 11
Stats: Set new school records in the 200 (21.12) and 400 (48.38) and also ran a 10.71 in the 100-meter dash
Coach’s Quote: “Connor Boland is an extremely hard-working, dedicated track athlete,” said Geneva coach Emily Long. “We are very proud of his accomplishments thus far and look forward to seeing what happens for him in the next few months.” 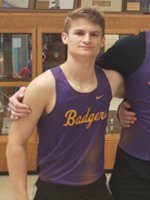 Name: Sam Chrzan
School: Berkshire
Grade: 12
Stats: Placed second in the pole vault at the Laker Invitational with a best jump of 11-feet, 6-inches
Coach’s Quote: “Sam has utilized Spire and their Pole Vault clinics throughout the winter and into the season to up his game in vaulting this year,” said Berkshire coach Aimee Green. “His hard work and dedication have paid off this week nearly winning two meets at the vault. He placed second only on the number of misses on Saturday at Pymatuning Valley.” 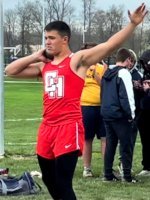 Name: Francis Connors
School: Cuyahoga Heights
Grade: 10
Stats: Won the shot put (41-6) and placed second in the discus (124-3) at the Fairview Relays, and won the shot (43-3) and discus (129-7) at the Independence Invitational
Coach’s Quote: “Sophomore Francis Connors had a fantastic week for the Cuyahoga Heights Red Wolves,” said Cuyahoga Heights coach John Shafer. “The team finished runner-up at the Fairview Relays on Tuesday. Francis led the shot put relay team to a first-place finish with a meet-high throw of 41-feet, 6-inches. He also had the meet-high throw in the disc relay with a 124-foot, 3-inch toss leading that group to a second-place finish. The Red Wolves team won the Independence Invitational by half a point and Francis came through big for key points in the throws. Francis won the shot with a personal record of 43-feet, 3-inches, and followed that with another first-place finish and personal record in the disc tossing it 129-feet, 7-inches. Francis is emerging into a young leader in our program and I look forward to seeing him continue to grow on and off the track.” 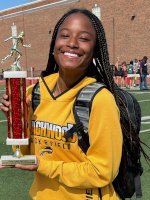 Name: Dakota Houston
School: Beachwood
Grade: 10
Stats: Won the 100 (12.56) and 4×100-meter relay (49.33) and finished second in the 200 (26.04) and third in the 4×200-meter relay (1:47.61)
Coach’s Quote: “Dakota showed great strength and determination in all of her events this past weekend,” said Beachwood coach Olivia Mayfield. “While it is already difficult to get a personal best in one event, she managed to receive personal best marks in both the 100 and 200 and anchored the 4×100 relay to a season-best time. She set her sights high and accomplished big things.” 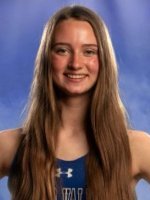 Name: Maggie Waldo
School: Grand Valley
Grade: 12
Stats: Won the high jump (5-1) and long jump (15-4), and finished sixth in the pole vault (7-6) at the Kurt Frankel Invitational
Coach’s Quote: “Maggie has been a very consistent jumper this year,” said Grand Valley coach Kurtis Fisher. “She has been in the top three in both the long jump and high jump in most meets this season. She is a strong leader of the team. She has been outstanding and is consistently jumping strong.”