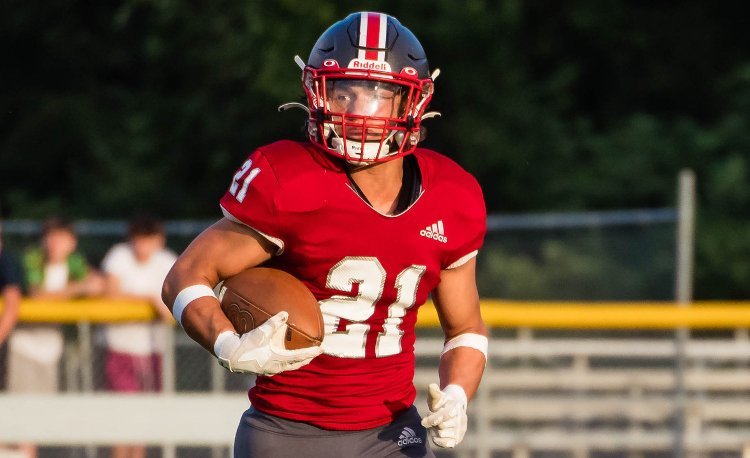 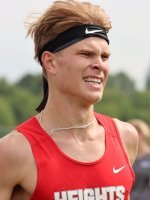 Name: Caden Buccier
School: Cuyahoga Heights
Grade: 11
Stats: Ran a 20:17 at the Woodridge Invitational
Coach’s Quote: “Caden ‘The Butcher’ Buccier is a man amongst boys and is still young and hungry when it comes to reaching his full potential as a 5k runner, and ran his PR of 18:04 last week at Cardinal,” said Cuyahoga Heights coach Chadwick Robinson. “His passion and drive are to become a state-qualifying 800-meter runner this spring, but make no mistake about it, he is using cross country to build his foundation of physical and mental strength and to also reach the state meet in cross country this year and/or next. His passion for greatness is infectious and makes coaching such a joy.” 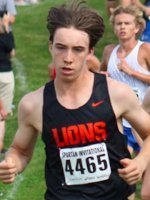 Name: Chris Utech
School: Orange
Grade: 11
Stats: Ran a 19:12.2 at the Woodridge Invitational
Coach’s Quote: “Junior Chris Utech had a standout performance at the Woodridge CVNP Invitational, finishing 24th with a time of 19:12.2,” said Orange coach Rachel Frutkin. “This is a course personal best for Chris, who has been in our top three all season. As a teammate and athlete, Chris is an incredibly hard worker and positive role model.” 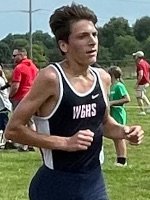 Name: Chris Whiting
School: West Geauga
Grade: 12
Stats: Finished 13th at the U Wanna Come Back Invitational with a time of 16:53
Coach’s Quote: “Chris has been an absolute pleasure to work with,” said West Geauga coach John Boylan. “He is now the number three all-time cross country runner at West Geauga. Chris works hard and is committed to doing his very best. He’s a team leader, a good teammate, and a good person.” 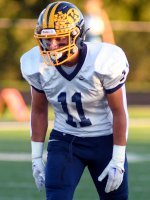 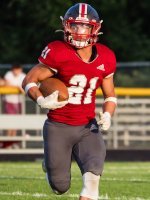 Name: Nate Blasiole
School: Crestwood
Grade: 10
Stats: Carried 30 times for 226 yards and three touchdowns; recorded 10 tackles on defense
Coach’s Quote: “Nate was a workhorse for us on Friday night,” said Crestwood coach Jack D’Amato. “He averaged 7.5 yards per carry and finished with three touchdowns. He was able to make cuts and get to the second and third levels. Our offensive line and skill guys did a fantastic job blocking to make sure Nate could be successful. He even got a key block from QB Charlie Sommer on one of his runs. Nate is a hard-nosed runner that is always willing to take a hit and still tries to gain the extra tough yards.” 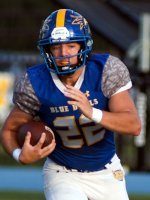 Name: Rory Corrigan
School: Independence
Grade: 12
Stats: Ran 15 times for 78 yards and two scores and completed 1-of-1 passes for a two-point conversion; on defense he recorded 10 solo tackles and seven assists, and he broke up one pass
Coach’s Quote: “By far, Rory had his most complete game of the season,” said Independence coach Rick Adams. “He averaged over five yards per carry, which allowed for other parts of the offense to open up. He was the leader on defense, making big tackle after big tackle.” 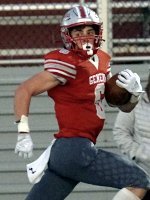 Name: Hayden Diemer
School: Geneva
Grade: 10
Stats: Recorded 221 yards of offense—including 159 rushing yards on 10 carries and three receptions for 62 yards—with three touchdowns; posted six tackles, including one for a loss, on defense
Coach’s Quote: “Hayden had a great game this past Friday night,” said Geneva coach Don Shymske. “He was explosive on offense as he had two carries of over 50 yards and two receptions of over 20 yards. He was a catalyst for our offense that had over 400 yards of total offense. This is a tremendous game for any player, but especially impressive considering Hayden is a sophomore.” 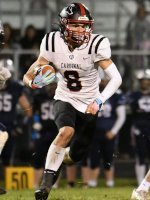 Name: Troy Domen
School: Cardinal
Grade: 11
Stats: Recorded eight tackles, including six solo stops, one tackle for loss, one pass breakup, one fumble recovery, and he picked off two passes; also returned a kickoff 64 yards
Coach’s Quote: “Troy’s dominance carried over from the previous week,” said Cardinal coach Chris Perrotti. “Troy has now had two games with two interceptions making his total now four. He was all over the field making plays and had a huge kickoff return of 64 yards in an effort that had him zig-zagging all over the field.” 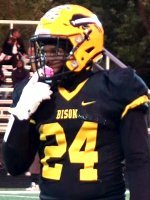 Name: Martez Pinkney
School: Beachwood
Grade: 11
Stats: Caught five passes for 121 yards and a touchdown, ran for 51 yards on eight carries, and recorded six tackles, including two for a loss, and he picked off a pass
Coach’s Quote: “Martez has been a solid rock this whole season,” said Beachwood coach Scott Fischer. “He plays extremely hard every game. He is Mr. Reliable. I’m very proud of this young man.” 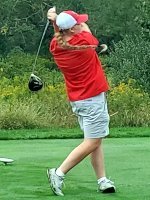 Name: Annie Johnston
School: Edgewood
Grade: 9
Stats: Shot a 91 in qualifying for the district tournament as an individual
Coach’s Quote: “Annie’s 91 at sectionals led our team and was fourth overall as an individual player to get out to districts,” said Edgewood coach Christina Fischer. “Annie has continually improved throughout the season, especially in her short game. Our team is excited to see what Annie can do this week at districts.” 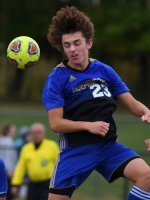 Name: Joey Jirmasek
School: Independence
Grade: 11
Stats: Scored one goal and played solid defense in helping the team record two shutouts
Coach’s Quote: “In a busy week with three games in five days, the outstanding defensive efforts by Joey Jirmasek against Lake Ridge Academy and Brush helped preserve two more Independence Blue Devils shutouts,” said Independence coach Brien McDonald. “Our players in practice and our opponents in games always get Joey’s best, and that’s what makes all players better soccer players. Joey also scored a beautiful corner kick header goal against Lake Ridge to help seal the victory, and you know the thrill defenders get when they can come up and score.” 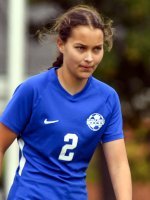 Name: Makena Rini
School: Independence
Grade: 11
Stats: Scored five goals in three matches
Coach’s Quote: “Makena scored more goals this week than in the rest of her career combined, giving us a new option on the offensive end,” said Independence coach Bryan Less. “Her physical presence showed up big time against Beachwood when she stole the ball to tie up the game with 25 seconds left and nearly did the same thing in the last five seconds. Makena is well on her way to becoming a complete player.” 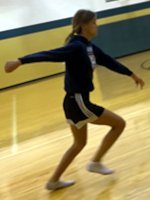 Name: Evelyn Stein
School: Lakeside
Grade: 9
Stats: Scored one goal with one assist
Coach’s Quote: “Evelyn was the deciding factor in a close match with Harvey, with a goal and an assist, as well as relentless defense as a center midfielder,” said Lakeside coach Aaron Chamberlain. “She played every minute of both matches this week.” 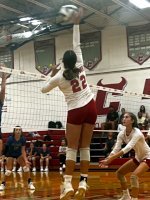 Name: Maddie Dustman
School: Crestwood
Grade: 10
Stats: Recorded 23 points, two aces, 17 kills, and nine digs
Coach’s Quote: “Maddie Dustman is an extremely talented sophomore,” said Crestwood coach Wanda Hoffman. “Maddie sees the floor very well and has the ability to work around the block. Her serving has been a huge part of our success. I look forward to having her for the next two seasons.” 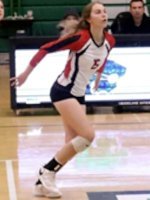 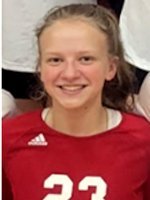 Name: Alex Nugent
School: Geneva
Grade: 12
Stats: Recorded 37 digs in two matches
Coach’s Quote: “Alex had a great week,” said Geneva coach Annah Haeseler. “We changed defenses mid-season in preparation for our matches this past week and she embraced the change. Alex was open to learning, gave it her all, and did so with pride and grace. I’m proud of her top-notch playing this season and her positive attitude, despite some recent losses.” 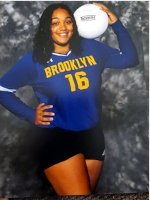 Name: Taylor Riffin
School: Brooklyn
Grade: 12
Stats: Scored 36 points with five aces, 40 kills, 23 assists, and 32 digs
Coach’s Quote: “Senior co-captain Taylor Ruffin never leaves the court,” said Brooklyn coach Debbie Hall. “She is the first one on and last one off and her leadership skills as captain keep the rest of our team in the matches no matter what the score. With setting and playing right side, Taylor’s offensive and defensive contributions keep our team in each match. She gives body and soul in every play and is our team’s driving force and deserves this recognition.”