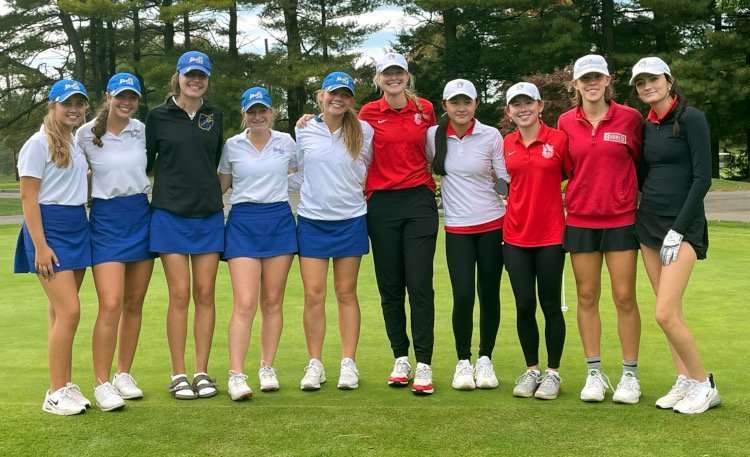 Independence and Hawken both punched their tickets to the state tournament after finishing first and second at the Division II Sable Creek District tournament on Thursday.

The Blue Devils won their third district title in program history with a score of 361. The Hawks finished close behind with a 363.

“It was really exciting today,” said Independence coach Karl Schuld. “I kept pleading with them, especially down to the last three or four holes, to make sure that every single shot is just the most important shot you ever took, and over the last four or five holes, the girls played really well. That’s one reason why we ended up scoring just a little better than Hawken, who had a great day.”

Independence spent most of the day bouncing between third and fourth place, but down the stretch, the Blue Devils were better than the rest of the field.

“One of the things that I think really helped our girls is just the pedigree they’ve had,” Schuld said. “They’ve been in these situations before and they have played with great golfers and other schools, so I think they knew there was another gear they could go to and for a part of a round, they were able to find that gear.”

Hillary Esper led the Blue Devils with a team-low 89, good for 12th place overall. Molly McGreal tied for 14th with a 90, and Emma Konopa and Bel Trombetta both shot a 91 to close out the scoring tied for 16th place. Macey McGhee also competed. She shot a 96 to finish tied for 26th place.

Independence will compete in the state tournament for the fifth time in the program’s nine-year history.

Hawken returns to the state championships for the first time since winning the state title in 2013.

“I am so happy for these girls,” said Hawken coach Jennifer Creech. “Many have worked really hard and we have a freshman that is experiencing this as well. It’s been so fun to watch them all develop as players as well as individuals.”

Ella Wong, the defending Division II state champion, led Hawken with a 79. She finished tied for third, two strokes behind the district champion.

Wong entered the 2022 season with the hopes of defending her title but more importantly, she hoped her team would join her in Columbus.

“Ella has certainly blossomed from her shell and I see her having the most fun this year and enjoying her last year playing high school golf,” Creech said. “She, as well as this group, have a great bond and have so much fun together.”

Kate Petersen carded an 85 to finish ninth, Helena Yanchar posted a 96, good for a 26th-place tie, and Keira Chang closed out the Hawks’ scoring with a 103 to finish tied for 39th. Lizzie Kent also played for the Hawks. She shot a 112 to place 50th.

“They all grinded it out,” Creech said. “They didn’t quit on themselves or let the course bring them down. In the past, my girls have said that Sable Creek is ‘where dreams go to die.’ They believed in themselves this year.”

“Making it to Columbus was our team goal, anything above that would be a bonus,” Creech said. “I want the girls to have fun and play golf that same way–there is no pressure and whatever happens, I couldn’t be prouder of all that they accomplished as a team. It’s been a fun four years watching both Ella and Kate grow as players and watch both of them finally make it to Columbus next week together. Kate is a great leader and Ella is the defending state champion. I can’t wait to see what happens next week.”

Chagrin Falls placed seventh as a team with a score of 403 but only the top three teams qualified for the state tournament.

Independence’s Mark Pillar can carpool to the state tournament with the Blue Devils’ girls’ squad as he shot a 78 to finish as the Division III Tannenhauf District runner-up. This is Pillar’s second straight trip to the state championships.

“I’m glad I advanced, but I was really hoping for the whole team to advance as well,” Pillar said. “We’ve played well all year and it’s disappointing to have missed qualifying by a couple of strokes. Tannenhauf is a tough course and I had to approach it differently than Pine Hills. I played smart throughout the round and struck the ball well all day. I had to hit good tee shots and stay below the pin.”