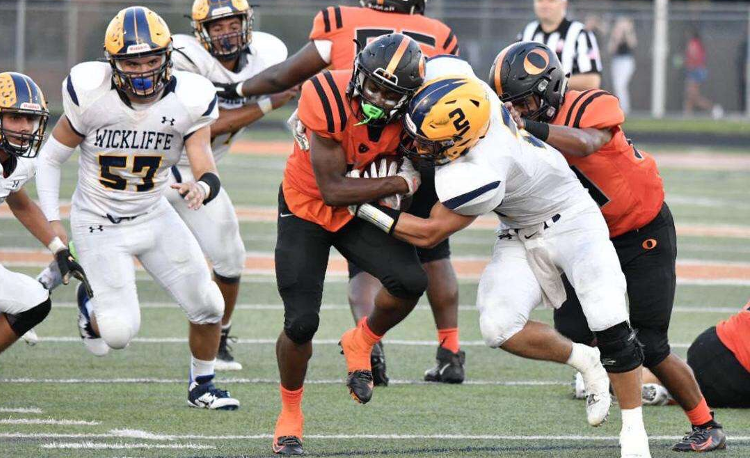 All statistics incurred during the week beginning Sept. 9 and ending Sept. 15. 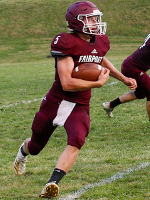 Name: Cody Paugh
School: Fairport Harding
Grade: 12
Stats: Ran for 209 yards on 26 carries with two touchdowns and a two-point conversion; also caught two passes for 12 yards and recorded seven tackles and two pass breakups; returned a kick 74 yards
Coach’s Quote: “Cody played outstanding in all three phases of the game against Trinity Christian,” Fairport coach Cameron Ruff said. “He returned the opening kickoff return 74 yards to the 1-yard line that set our offense up for a score on the next play. He was the focal point of our offensive game plan this week. Cody played strong on defense as well. He recorded seven tackles and two pass breakups that prevented first downs to the opponents’ offense. He is a team captain and is our hardest-working player. He leads by example through his work ethic and his constant effort on each and every play.” 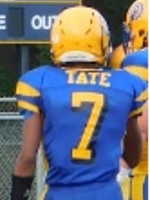 Name: Jamiar Tate
School: Brooklyn
Grade: 12
Stats: Returned a punt 71 yards for a score and recorded 4 tackles, 2 assists and 2 pass defenses in a quarter and a half of play; ran for 16 yards
Coach’s Quote: “Jamiar started the game out with a solo tackle then returned a punt 71 yards for a TD,” Brooklyn coach Sean Belveal said. “The next series, he had a pass defended and another solo tackle on a fly sweep. In only a quarter and a half of play he ended with four solo tackles and two assists with two pass defensed, a 71 yard TD on a punt return and one rush for 16 yards.” 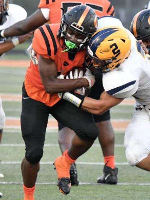 Name: Diante White
School: Orange
Grade: 12
Stats: Carried 23 times for 199 yards with two touchdowns and a long run of 53 yards
Coach’s Quote: “Diante carried the ball really well for our offense,” Orange coach Adam Bechlem said. “He was very difficult to tackle and broke the first tackle on almost every run. His performance was critical in our team earning our first win of the season. He also made many tackles from his safety position on defense.” 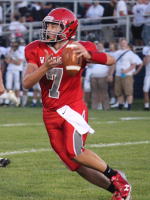 Name: Zach Winchell
School: Edgewood
Grade: 10
Stats: Completed 13-of-23 passes for 183 yards and three touchdowns and ran for 46 yards and two scores
Coach’s Quote: “Zach continues to grow with every snap he lines up behind center for us,” Edgewood coach Jon Butchko said. “He is undoubtedly growing as a football player, but more importantly a leader of the team. With the talent we have at the wide receiver and running back spots, he does a great job getting the ball to those playmakers as evenly as possible, which he understands makes our offense a little more dangerous. In the Jefferson game, he shook off an uncharacteristically slow start and was able to help the team win in convincing fashion as a direct result of the decisions that he made.” 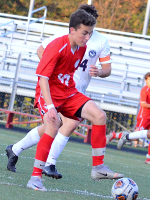 Name: Joey Abrams
School: Hawken
Grade: 12
Stats: Recorded an assist in each match during the week
Coach’s Quote: “Joey has been an important part of our team, adding his technique, passing and dribbling activity to help us score goals,” Hawken coach Vlad Muresan said. “He recorded eight assists in the first eight games of the year; a truly remarkable stat.” 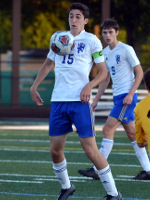 Name: Elek McDonald
School: Independence
Grade: 12
Stats: Scored two goals and two assists in a win over Brooklyn
Coach’s Quote: “Elek is our central mid who helps facilitate our game,” Independence coach Ryan MacRaild said. “He works hard on offense and defense. His skill and first touch are some of the best we have had and his ability to distribute creates opportunities for his teammates to thrive. As the assist leader at IHS, Elek continues to share the ball and lead us to victory.” 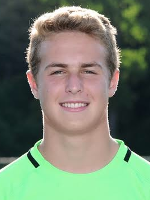 Name: Adam Rosenthal
School: Orange
Grade: 12
Stats: Recorded 26 saves with one shutout in two matches
Coach’s Quote: “Adam has been very solid for us all season,” Orange coach Chris Cvecko said. “His shot-blocking ability, as well as his skill on the ball, has been crucial for our team. His leadership has also been contagious amongst the group.” 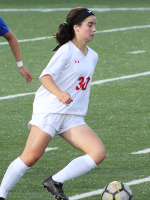 Name: Carmen Cicerini
School: Hawken
Grade: 9
Stats: Scored 4 goals with 2 assists in 2 games
Coach’s Quote: “As an incoming ninth grader, Carmen immediately found ways to contribute to the varsity team, working tirelessly up top to create goal-scoring chances and combine with teammates on both the defensive and offensive ends,” Hawken coach Heidi Wilbrandt said. “Her work ethic demonstrates a commitment to her teammates and to the game of soccer and she sets a positive example for everyone in the program.” 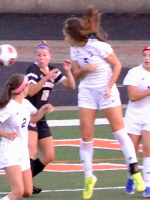 Name: Nicola Ehrbar
School: West Geauga
Grade: 11
Stats: Scored seven goals in three wins
Coach’s Quote: “Nicola is one of those players that you can look to for any game as a coach,” West Geauga coach Kori Jesenovec said. “She can play in any midfield or forward position and always comes through in big moments such as the outstanding header against Chagrin. One of our most athletic, attacking mindset players that has and will continue to be one of our greatest assets as we continue with this season.” 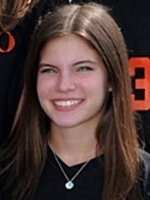 Name: Peyton Weiss
School: Orange
Grade: 10
Stats: Recorded four non-goalie saves and was instrumental on defense in a shutout of Ellet
Coach’s Quote: “Peyton’s defensive supporting runs had her in great position to stop the opponent’s shots,” Orange coach Jeffrey Mann said. “She stopped three against Hawken and one against Chardon as well as helping keep Ellet scoreless. Peyton works hard and is always improving herself. She is a positive team player.” 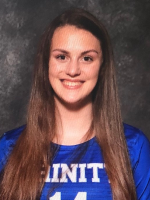 Name: Savannah Brownfield
School: Trinity
Grade: 12
Stats: Recorded 35 kills with 6 aces, 10 blocks and 12 digs
Coach’s Quote: “Savannah has shown tremendous leadership this past week as she has been the most dominant player at the net offensively and defensively,” Trinity coach Susan Dezzutti said. “She has helped keep the team focused and determined throughout the week through her leadership and her positive attitude.” 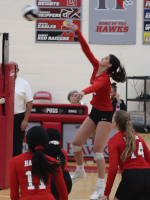 Name: Jordan Kutash
School: Hawken
Grade: 12
Stats: Was a perfect 32-for-32 from the service line with 13 kills and 36 digs
Coach’s Quote: “Jordan has been and continues to be our consistent contributor,” Hawken coach Patty Hace said. “She brings a solid volleyball IQ to the court each game and sees the court in a way that adds to her success. When she gets fired up and hits that peak potential, she is tough to defend. Our team feeds off of her contributions and we hope to see this same spark the rest of the season.”