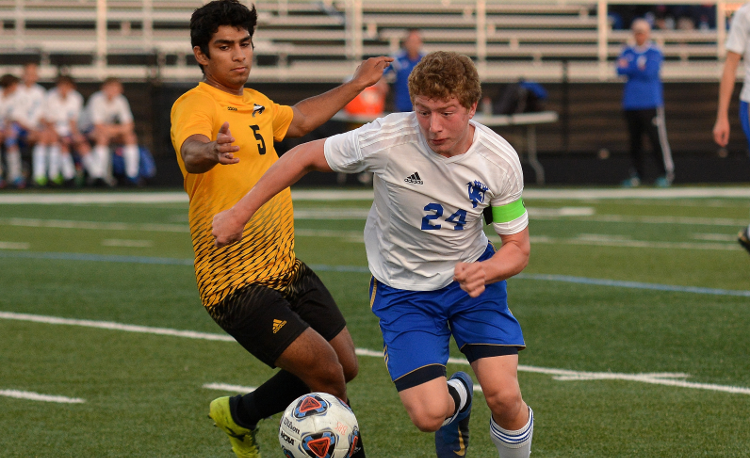 With the win, the Blue Devils locked up at least a share of a fifth straight league title. They can win it outright with a victory over Trinity on Oct. 1.

“We kind of had a game plan set up,” Independence coach Ryan MacRaild said. “We got a chance to watch Beachwood last week so we knew where we needed to put our pieces to hopefully put our guys in a position to win. The guys executed and stuck with the game plan.”

McDonald broke a scoreless tie in the 11th minute when he was in the right place at the right time to punch in a deflection. He scored off a Christian Streibel free kick less than three minutes later to increase Independence’s lead to 2-0.

“We got a nice deflected goal on the first one to break the ice,” MacRaild said. “Then we got a beautiful free kick in from Christian Streibel and Elek has a way to get to those balls in the air. He’s got an uncanny knack for that.”

Casey McGhee made it 3-0 when he perfectly placed his shot just below the crossbar and the extended arms of the Beachwood keeper with 14:44 left in the game.

McGhee’s goal was even more important for the Blue Devils when Ivan Thal converted a penalty kick off a handball with 3:43 remaining.

“That mattered because they got the PK late and you can get a little energized after that,” MacRaild said. “We needed that extra cushion with what hopefully will turn out to be our fifth straight league title and we’re looking for more in October.”

“It was a great team win tonight,” MacRaild said. “Jimmy Senick man-marked their leading scorer, Luke Bennett, who is one of the leading scorers in the error. We had to neutralize him. Our defense held and the midfield distributed the ball well. Our forwards worked hard.”

Ethan Manelski recorded one save in the win while Beachwood’s Jake Muencz finished with four.