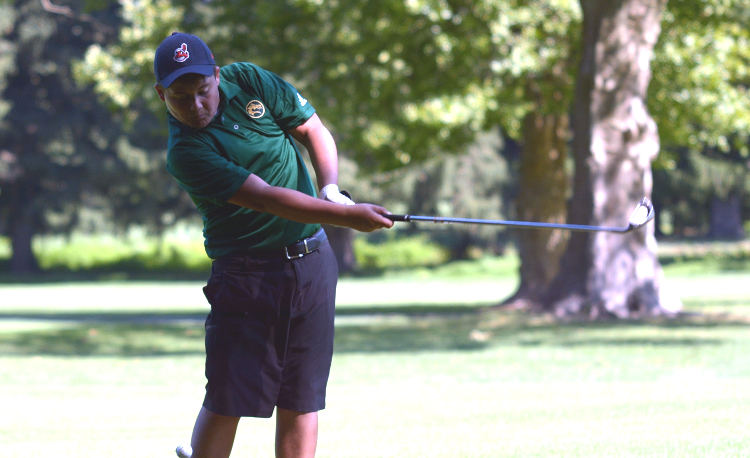 Lutheran West took advantage of its home course in the win over the Tigers.

Senior Sam Webb shot even-par 36 and even notched her first eagle of the season to lead the Longhorns. She finished the round with six pars, an eagle and two bogeys. Callie Wabeke carded a 46 and Nadia Kauntz and Julia Colton closed out Lutheran West’s scoring with a 48 and a 60, respectively.

Chloe Steger led Chagrin Falls with a 43 and Christina Joseph finished with a 48. Molley Lowe and Ali Holtz rounded out the scoring with a 51 and a 57, respectively.

Ashton Jones carded a team-low 46 and Zack Palmer shot a 51.

Jacob Potts shot a match-low 36 to lead Trinity to a win over host Wickliffe. Jack Rolando added a 43 for the Trojans and Jack Peters and Luke Wessel finished with a 44 and a 47, respectively. All four Trojans shot season-best scores.

Calvin Cackowski shot a team-low 38 for Wickliffe and Mario Cefaratti added a 45.

Robert Schron claimed medalist honors with a match-low 36 to lead Chagrin Falls to a 4-0 start this season.

Junior Jack Stover led Orange with a 1-over 36. Ajay Deshpande carded a 41 in his first-ever varsity match and Dillon and Jackson Fellinger came in with a 42 and a 43, respectively.

Geneva improved to 6-0 with a win over host Berkshire.

Ayden Richmond and Kole Opalko shared medalist honors as each shot a match-best 45. Devin Morrison carded a 46 for the Eagles and Caleb Nugent and Logan Reinke both shot 48.

Matt Hart led Berkshire with a 48.

Thomas Wong shot a match-low 38 and Connor Bryan added a 39 to lead Hawken to a 162-187 win over Kirtland. Jack Spiegle shot a 42 and Quinn Peterson closed out the scoring with a 43.

Zach Szymczak led the Hornets with a 44. Arron Schulz shot a 46, Victor Alfieri added a 47 and Ben Beres rounded out the scoring with a 50.