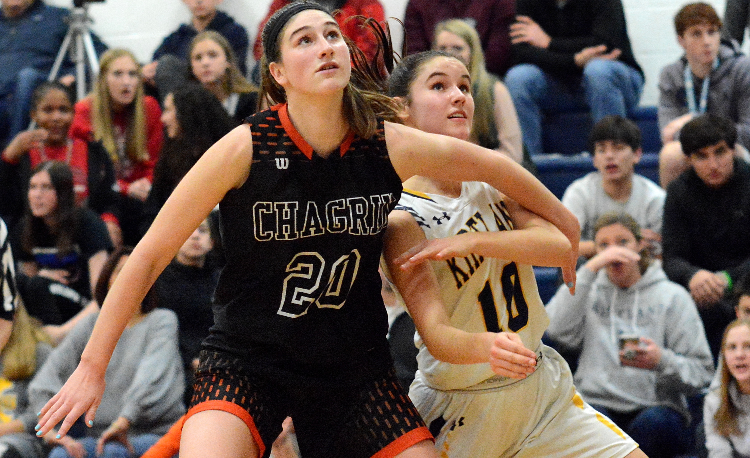 The Tigers, who were 17-6 overall and 10-4 last season, have the talent and depth to match their lofty goals.

“We have a large senior class led by two four-year letter winners,” said Chagrin Falls coach Brittany Anderson, who is 138-75 in her 10 years at the school. “The experience and leadership they bring is something that we haven’t seen in the last five seasons. Returning all five starters, plus reserves with postseason experience is definitely a perk as well. If we can continue to grow and mature in our game, we have a lot of people capable of stepping up and taking over a game.”

As always, the Tigers will be tenacious on defense and this winter they’ll be able to match up against some of the bigger teams in the Chagrin Valley Conference and district.

“We have speed and we are aggressive on defense,” Anderson said. “We have some height and strength inside, so our guards can apply pressure out front and know that they have help side defense to back them up. We would like to force teams into quick shots, then run in transition.”

“Carolyn has grown so much since her freshman season,” Anderson said. “She is a steady leader for us out on the floor and she can score both inside and outside. Carolyn is a great rebounding guard and is willing to make plays wherever she can to help the team.”

Dalessandro, a 5-foot-7 guard dropped 13.5 points per game with 3.1 steals, 3.0 rebounds and 1.2 assists per contest. She was named Special Mention All-Ohio, first-team All-CVC and first-team all-district as well as the team’s MVP.

“Bella is extremely athletic and a complete player,” Anderson said. “She turns her defense into offense with her speed and quick hands. Bella plays tough and determined.”

“Kwaz has come up big for us since the middle of last season,” Anderson said. “She has so much potential and has been a solid leader for us in the preseason. She has worked on her moves inside and does a great job of using her body and playing physical.”

Juniors Lily Karyo and Julia Santamaria round out the projected starters.

Karyo, a 5-foot-6 forward, averaged 6.9 points, 3.1 rebounds and drained 70-percent of her free throw tries. She was named honorable mention All-CVC and all-district.

“Lily has a diverse skillset and a high basketball IQ,” Anderson said. “She poses some match-up problems for opposing teams because she can shoot outside or score on a back-to-the-basket move. This is Lily’s third year on varsity and she’s emerging as a team leader as she grows more comfortable with her game.”

Santamaria, a 5-foot-7 guard, made quite an impact in her first season with the Tigers after moving to Ohio from the West Coast. She averaged 7.8 points and 6.7 rebounds in earning honorable mention All-CVC and all-district honors.

“You can tell that Julia loves to play the game and she’s a lot of fun to watch,” Anderson said. “She makes hustle plays that other athletes won’t even attempt. Julia plays with her entire heart and her work ethic pushes her teammates to reach their potential.”

Senior Molly Barr, a 5-foot-3 guard, provides the Tigers with versatility and junior Emma Livingston, a 5-foot-11 forward, should help out in the paint.

“Molly knows all five spots on the floor and does a great job directing our offense. She finds ways to finish at the rim and can knock down outside shots. Molly plays hard-nosed defense and won’t back down from a challenge,” Anderson said. “Emma has worked really hard to get stronger this offseason. She is becoming a defensive presence inside and it is fun to watch her and Kwasny go head-to-head in practice. She’ll start out as a critical defender and rebounder and hopefully, emerge on offense as well.”

Junior Sadie Nachtwey, a 5-foot-6 guard, and sophomore Peyton Gellin, a 5-foot-5 guard, should be solid contributors in their first year with the varsity.

“Sadie’s shooting and ball-handling make her an important reserve for our offense,” Anderson said. “Peyton’s speed and quick reaction time have a huge impact on defense. She makes great reads and works well with the other guards in our defense.”

“We have big senior and junior classes,” Anderson said. “We will need to find balance and develop our younger players and get them acclimated quickly. Our non-conference schedule is tough this season–bigger schools and teams with a lot of depth–plus we have some strong, tall guards in our conference. We will need to find creative ways to limit their scoring opportunities.”