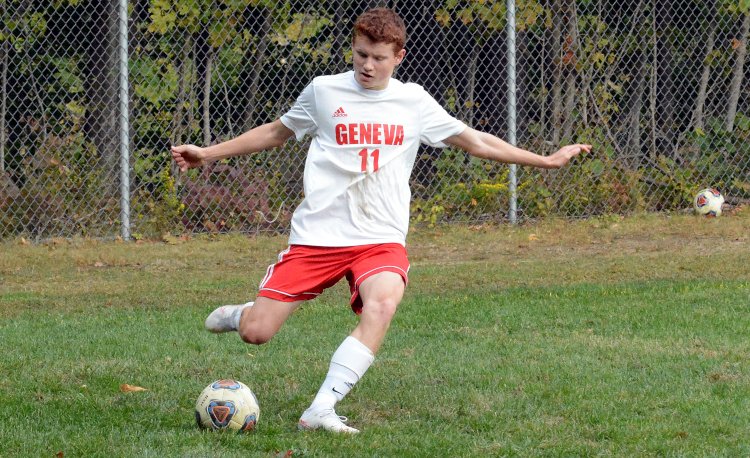 Geneva’s boys’ soccer team returns five starters leaving the Eagles eager to live up to their potential this fall.

To do that, the Eagles will have to come together and play as a team.

“Our team has plenty of potential,” said ninth-year head coach Jeff Hull. “Many of our players have been playing together for a while and our younger players have varsity experience. This will be a year where we need to turn our potential into success.”

The Eagles finished the 2020 season with a 7-11 record overall and a 4-2 mark in the Chagrin Valley Conference Valley Division.

Hull’s biggest challenge is replacing the gaping holes he lost to graduation.

“We are graduating almost all of our goal scoring from a season ago,” he said. “We will be relying on young guys to step up and have moved some defensive players around to help carry the goal-scoring responsibilities.”

Midfielder Stephan Lechintan returns as the team’s most potent scoring threat. The junior scored 10 goals with three assists on the way to earning first-team all-CVC honors as a sophomore.

“Stephan has experience and has put in the work this offseason,” Hull said. “This is his year to show what he can do.”

Seniors Ethan Yost and Jack Kollhoff both earned second-team all-CVC honors last season and will be counted on this season to be among the team’s leaders on the field.

Yost, a midfielder, scored one goal with one assist last season and Kollhoff, a defender, will be expected to stabilize the defensive third.

“Ethan has had an excellent offseason and has done everything he needs to do to have success this season,” Hull said. “Jack has experience as our center back and we will count on him to bring stability and consistency to our back line.”

“This will be Ari’s year to prove himself as a strong scoring threat,” Hull said. “Eric is the engine that drives our team. His workhorse mentality will be needed on the pitch again this season.”

Senior Carl Gunther also will patrol the defensive third and sophomore Owen Pfeifer will play forward for the Eagles.

“Carl will move to the center this season after playing outside back for us the past couple of seasons. Carl comes to work every day and has for the past two seasons. We will be relying on his experience and consistency on our back line,” Hull said. “(Pfeifer is) one of our young players who we will count on to step up and produce.”

Geneva enters the season with plenty of promise.

For the team to reach its potential, the Eagles are going to have to work hard and play consistently while also minimize their mistakes.

“In order to be successful this season, we are going to need to focus on the basics and play good soccer,” Hull said. “We will need to eliminate unforced errors and support our teammates when we make mistakes in order to minimize damage.”