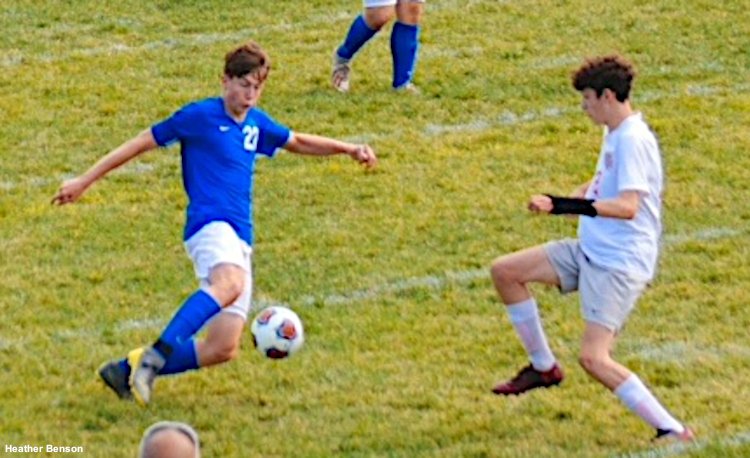 Grand Valley opens the postseason on Saturday and the Mustangs head into that showdown with former Northeastern Athletic Conference rival Maplewood riding the momentum of setting a new school record with 10 wins in a single season.

The Mustangs actually won 11 games last fall but two of those wins occurred during the postseason. Grand Valley finished the 2021 regular-season with a 10-4-1 record.

“It’s been exciting,” said Grand Valley coach Rick Huffman. “We don’t have a ton of club players, we just get kids that want to play and we’re just grooming them and we’re working hard and it’s exciting.”

Winning 10 regular-season games has been a goal for the program for several years. The Mustangs are only six years removed from a 0-16-1 record in 2015.

They won four games in 2016 and then jumped up to seven the next season and finished the 2018 campaign with a winning record, 9-7-2.

“We had two teams a few years ago that overall, I thought on paper they were better,” Huffman said. “However, due to the course of the season and whatnot, both times they finished 9-7. In the last two years, what we really focused on was just player maturity. I told them, ‘you guys are technically immature when it comes to soccer, and what I mean by that is we’ve got to understand adversity, you’ve got to understand competition. It’s one thing to go from a zero-win season to a four-win season or to a seven-win season. It’s another thing to take a seven-win season to 12 wins or 15 wins. That’s special and that requires a lot of work, and that requires discipline; that requires focus.”

Huffman’s players have bought in and they’re putting in work outside of practice.

“What I’m getting now is, ‘Coach, I was watching that video and I saw my body position on that guy,’ and it just blows my mind. It’s coaching and they get it. Soccer is a game that’s really above your shoulders and you have to understand how guys are positioning their body or how they’re playing or whatever.”

Early on in this transformation period, the Mustangs weren’t able to rely on their technical ability to keep them in games, so Huffman pushed them to increase their fitness level.

That has allowed the Mustangs to remain competitive for a full 80 minutes.

“They might be technically better than us, but we’re going to run with them the entire game and we’re going to make them work,” Huffman said. “If you look at the stat line itself, we are definitely a second-half team. I tell the boys all the time, it seems like they like to get punched in the gut and then come out and start playing. I don’t know why, but that’s how it is.”

Grand Valley’s three-year turnaround wouldn’t have been possible without the leadership and commitment of its senior captains Kyle Benson, Daniel Foltz, and Andrew Verhas.

Benson, a two-year captain, has scored 14 goals with eight assists this season, but it’s his work ethic, preparation, and leadership that has meant the most to the Mustangs.

“He is the on-field leader by far,” Huffman said. “He brings it and he never quits, ever.”

Last fall, Grand Valley’s season ended with a 5-1 loss to Badger. The loss was disappointing, but what Huffman saw out of Benson that day set the tone for success this season.

“We lost in the district semifinals to Badger last year but the score doesn’t completely show how close it was,” Huffman said. “Even their coach said it was 3-1 for 60 minutes and we were dominating. He said if we had 10 No. 20s it might have been a different game. Kyle is a special player. He doesn’t score a ton but he’s had a couple of beautiful runs of 30 to 40 yards and he bangs it in the upper 90. He just has a great motor and effort and he just brings it and he’s not afraid to go up against anybody. The younger guys have responded to that.”

Foltz, also a two-year captain, has scored five goals with two assists this season from his center-back position.

Last fall, Foltz played as an outside midfielder but the Mustangs lost their entire defense, aside from its keeper, and he moved back to help the team.

“We nicknamed him Superman,” Huffman said. “He’s strong. The kid works out all the time. He’s in great shape and he’s phenomenal in the air. I’m like, ‘dang, we just need a strong, physical presence back there, and I really think it’s you.’ He said he’s never really played center back before but I said there’s like two positions in soccer, you’re either a keeper or a field player, and he’s taken it on well and he’s done a great job.”

Grand Valley has outscored its opponents, 78-34.

Verhas has recorded 114 saves this season.

Grand Valley opened the season with just two captains, Benson and Foltz, but that changed when Verhas was added to the mix.

“The team wanted to roll over the captains from last year because it was Dan and Kyle and they were leading well,” Huffman said. “The team said we don’t even need to vote, we know it’s Dan and Kyle. Andrew came up to me one night and he said, “Coach, I want to be a captain.’ He said he feels he put in the work and he has shown everyone he has worked his butt off to be where he is. This kid does not come across like an arrogant kind of kid. He’s so well-mannered. The fact he came up to me and had that one-on-one conversation with me, it just really blew me away.”

The next day, Huffman addressed the team and the Mustangs were unanimous in adding Verhas as their third captain.

“It was really cool,” Huffman said. “He takes a lot of pride in what he does and those guys, the captains, kind of set the standard.”

Grand Valley’s most potent attacker is junior Jordan Briggs, who leads the team with 40 goals and also has assisted on eight others.

His 40 goals are a single-season school record.

“I want our strikers to be like hunters or sharks,” Huffman said. “You have to fight and you can’t give up and lose the ball. When the defender gets in, you have to knock it out or you have to press those backs and make them work hard to get the ball out of there. He has gotten so many second-chance goals because he makes a shot and the goalie blocks it and it goes to a defender, but then he goes after the ball and he makes that defender work and he gets the ball off of his foot and he gets that second shot.”

Briggs plays with the hint of confidence all good strikers must possess.

In fact, when the Mustangs played state-ranked Kirtland, Briggs made a declaration and then went out and lived up to his word.

In all, 10 different Mustangs have scored goals this season.

Briggs and Benson lead the team with 40 and 14 goals, respectively. Jaymeson Phillips has scored nine, David Marciella has contributed with eight, and Foltz has scored five. Tommy Martin and Verhas both have three goals, Tyler Felix has scored two, and Peyton Dryer and Damian Johnson each have one goal to their credit.

Phillips leads the team with 12 assists.

Grand Valley will attempt to win game No. 11 on Saturday against Maplewood.

“We’re excited to play them,” Huffman said. “Our goals for the season are always that we want to hit double-digit wins and host a playoff game. If we can do that, we’ll feel this season was a success. And now, if we can go a little farther than that, so be it. We want to have a good game against Maplewood and go from there.”